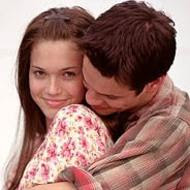 So one day there was this young lady eating at a little cafe. She wasn't the most attractive girl in the world, but she happened notice that the guy sitting at the table next to her was VERY handsome!!! He was TALL...broad shouldered, with blonde hair and SCREAMING SILVER BLUE EYES!!!! Just lookin at him,  her heart was beating faster. She HAD to get his attention!!! SHE JUST HAD TOO!!! BUT HOW? She was kind of a plain lookin girl...still she kept sneakin little glances over at him...he was soooo handsome... what could she do?!*sigh!
ALL of the sudden, this handsome man sneezed! As he sneezed, he threw his head back, and flying out of his face was a glass eye. The glass eye soared over the table and without even thinkin twice about it, the kinda plain lookin chic, stuck out her hand and caught the glass eye in mid-air! She stared at it lovingly for a moment then said, "Here is your eye back, sir," she said very politely. (See now if it was ME, and some handsome guy, I soooo woulda have kept the eye to put under my pillow)"Thank you SOOOO much the man said!" Then he invited her to finish her meal at his table. When the bill came, THE HANDSOME MAN paid for HER MEAL!!!(now this is a BIG DEAL when a guy does this!;) THEN he asks her for her number. She is absolutley shocked and flattered that he would want it. Sooo she gives it to him.
The next week they just happen to run into each other at the gas station. When he sees her, he goes SPRINTING across the parking lot to open the door for her and when it is time to pump he says he'll do it for her!!! (Awwww) Then he offers to wash her car for her. HE does all the windows, the interior, waxes it...the WHOLE shabang!!! When she invites him over for dinner one night, he says he'll do the dishes..(DON;T worry, there was TOTALLY a chaperone at the house!;) While, he is there, he notices her lawn NEEDS to be cut, the bulb in the ceiling fan needs o be changed, paints a room, kills a roach, the toilet needs to plunged etc...
So the relationship begins to flourish and the girl thinks that he is really starting to fall in love with her. NO ONE HAS EVER...treated her this well. But she can't be sure! IS he sincere? Or is he leading her on? Just playin with her? Are there other girls? So she asks him... She says, "Is it just me? OR do you treat ALL the girls you know like this?!
He looks down at her adoringly...
She stares at his handsome face and into his blue-one-glass-eyes and he says,
"No baby, its JUST you!!! It ALL started that day at the cafe....
.
You just HAPPENED to...
.
.
CATCH MY EYE!!! ;)
(What a love story! Hope it happens like THIS, for me!)
.
AHAHAHAHAHAHAHAHA!!!
You KNOW your laughing!!!!
Don't EVEN deny it!!!
I wish I could take FULL credit for this joke BUT...I CAN"T!
This is MY version! :)