LOOK what I found!!! 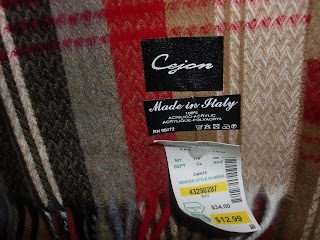 A BRAND NEW SCARF!!!!
LOL!!! Last week during outreach I found this MEN'S SCARF just lying on the ground in front of Arbys!!! EVERYONE'S LIKE...You don't know where it came from...who had it...Mary don't touch it!!! BUT...as you all know...I could care less about that stuff!!! AND LOOK IT STILL HAS THE TAG ON IT!!! MADE IN ITALY!!! Wooooohoooooooo!!!! If it were CUTE I would totally keep it BUUUUT...Idk...i mean its NOT QUITE as ugly as a.... 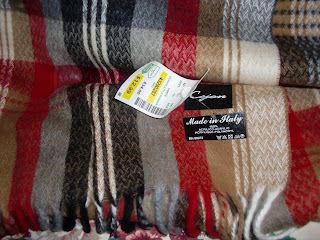 IF I had a boyfriend...he would sooooooooooo be gettin this scarf for Christmas!!! SEEE what all you guys are missin out on??? ;) ;) ;) Buuuuut since I don't have no one to giv it to, cuz my brothers would NEVER wear a scarf..unless they were like going to the North Pole or something...i'm just gonna bring it back to Stein Mart and get some store credit!!! HAHAHAHAHA!!!  SOMEONE is sooooooo gettin a present from there for Christmas!!! Lets see who ELSE do I need a present for???
♥Mary Frances :)
Posted by Mary Frances at 12:00:00 AM