From Sis.Ikerd!!!
It was sooooo GREAT!!! To hear SIs. Ikerd speak last night...Her and her husband were missionaries for 28 years in Africa...all different countries...South Africa, Kenya, Zimbaway...and MORE that I can't even think of !!! They labored in the fields of Africa till Bro. Ikerd's health would no longer allow him to be there any longer...AND that was pretty much when MY CHURCH became aquainted with them!!!
.
For I think around two years the Ikerds came and were a blessing to our church!!! We had A LOT of hard-headed people that were hard to get to pray get the Holy Ghost in the time they were with us!!! One of them Sheree Cleveland and our current youth pastor's wife, Janelle Karlson!!!
.
Bro. Ikerd had a quiet way of just kind of nonchalantley talking as he preached...but let me tell you something...when it was alter call time...THE HOLY GHOST FELL!!! After being with us for a while, the Ikerd's decided that they could not stay still...they HAD TO REACH MORE SOULS...and they headed out to Prescott Arizona and built a church from scratch up there!!! That church is now a THRIVING church...AND its built on people that had absolutely nothing to give or offer...people that were pulled out of THE PIT of this WORLD!!! AWESOME!!!
.
I remember it was at Bro. Ikerd's funeral that I decided I wanted to marry a man LIKE HIM!!! (Read it in A Man Like That)  Oh man...that funeral was AWESOME!!! I mean just to hear this man of God...SOOOO READY TO BE WITH JESUS...yet longing to stay a little longer...BECAUSE OF HIS BURDEN FOR SOULS!!! Till his dying day he just wanted to KEEP REACHING!!!
. 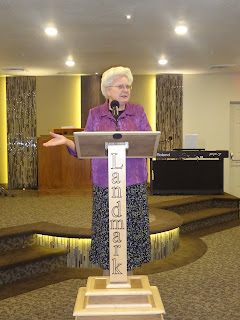 Now Sister Ikerd is doing the SAME thing!!! She said that AFTER her husband died she knew she had to go back to Africa and keep reaching souls...her ONLY question was...COULD she do without her husband??? Awwww!!! BUT SHE DID!!! And she is going back again!!! Sooooo I just wanted to share a FEW words....
From Sis.Ikerd!!!
"There isn't anything more important to God than souls. There isn't anything greater than souls. There isn't any greater cause to die for."
.
"The greatest miracle you will ever see is a changed life!"
.
"Keep on Keeping on!"
.
AND a few words of advice from Sis, Ikerd on before marriage...this isn't from last night...just from over the years...
.
"If your lazy, don't EVER get married!"
"Nothing was complete until God made a woman!" Woot! WOOT!!! ;)
"Learn how to work under the authority in your life right now!"
"Learn how to cook!"
"Remember to say thank you!"
"Helpmeet-We are a helper! She is there to complete him!"
.
One thing that I really remember Sis. Ikerd teaching on was PRAYER!!! I remember her telling us girls that she would think, HOW CAN I BE A MINISTERS WIFE??? God I can't sing!!! I can't play the piano! (I'm like OH YEAH...thats sooo ME!!!) SHe is like, but God said that there was one thing she COULD do and be good at and that was to PRAY!!! Is there ANYTHING more important for us as Godly Apostolic woman to learn than to PRAY???
"You gotta learn to have a good relationship with God FIRST-if you don't have time for God, you won't have time for your husband!"
.
I'm sooooo thankful for the Godly teachings that I have gotten over the years!!! We are soooo blessed to have these woman of God in our life!!! 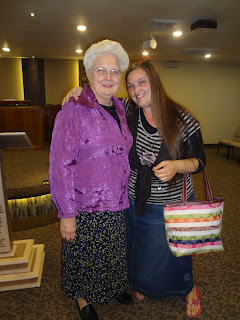 And I would like to end this with one of my all time favorite quotes from Sis. Ikerd...I like it cuz I feel like I can relate...AND for all you girls out there that may have a bad outlook on men, due to previous circumstances in your life...LISTEN UP...Sis. Ikerd said,
"I came from a busted home, but life with him, and he redeemed them all!"
.
I was just like AWWWW!!! ANd we're not talking about a lady that was pampered and spoiled, and left with a fortune..but someone that they SPENT THEIR LIVES working for God!!! Awwwww man...thats the kinda love story I wanna to have!!!♥♥♥
♥Mary Frances :)
Posted by Mary Frances at 2:14:00 AM