This tall, 21-year-old, broad shouldered, blue-green-gray-brownish eyed (Ok I have NO idea what his eye color is! LOL) strapping, ruggedly handsome young man attends Valley Pentecostal Church in Glendale AZ, pastored by Bro. Garrett, and he is known and LOVED by ALL!!!
.
One thing that EVERYONE knows about ROY is that he LOVES ADVENTURE'S IN ODYSSEY!!!!!!! He is probabley like their biggest fan EVERRRR!!! Roy's personality is described as goofy and fun. He has a great sense of humor...always crackin a joke...to get a scoop on his funny, buuuuut dorky jokes go listen to him on
Audiotheatrecentral.com
.
this is an AWESOME audio podcast him and two other guys do monthly and Roy and his buddy Andrew always keep it interesting with their wacky-off-the wall sense of humor! 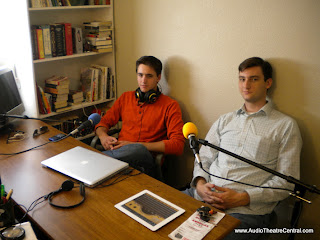 Audio Theatre Central is a radio podcast with reviews of all the lasest on radio dramas!!! A great entertainment resourse for the Christian family!!! :) Check them out HERE!!! (Hows THAT for a good ad!?!?! Yes, i'm awesome, I know it, but you all can still go ahead and tell me...I NEVER get tired of hearing it!!! NEVERRRRR!!!;)
.
AND Roy is a really big APPLE fan, here they are SHOWING their APPLE PRIDE!!! LOL! 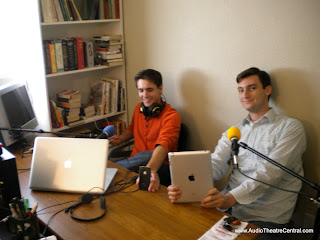 Roy has like THE FUNNNNNIEST laugh EVERRRR!!!! He sounds like Ernie from Sesame Street!!! (If you have never heard Ernie's laugh search it on google) You will agree...that the crinkly-cymbol like sound...THAT is soooo ROY when he starts laughing really HARD!!! And then, EVEN if you don't think whatever he is laughin at is funny, you will just start laughing because of his laugh!!! HAHA!!!
.
Here is, Serranading a LOOOOOOOVE song for these two loverrrrs!!! 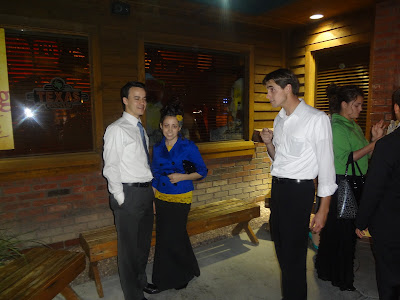 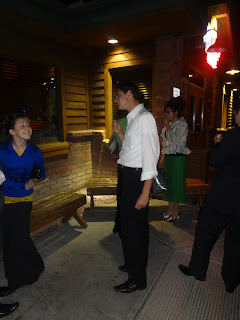 Roy likes to be involved in anything that involves radio and sound. He is one of the sound men at his church and he also plays the guitar at his church and with his family!!! (Notice how IMPRESSED his two cousins are by his playing?! Bahaha!!!)

Speaking of family, i've been told that Roy is a very family oriented person. He has a good relationship with both his parents and it is quite obvious that he VERY close to his younger sister Shelbie!!! They are always together at  youth functions and he is always looking out for her around guys and buying her meals when they go out to eat!!! (Awwwww!) OH AND he is also Sis. Reckart's grandson, and LET ME TELL YOU SOMETHING ladies, he would be WORTH marrying, JUST sooooo you could be related to that AWESOME WOMAN!!! Nobody can teach about devotions with God like her!!! HAHA!!! OMW!!! She is sooooooooooooo FUNNNNY! I LOVE SIS. RECKART!!!
.
.

(Roy with his sister Shelbie and two of his cousins, Cara and Alyssa!) 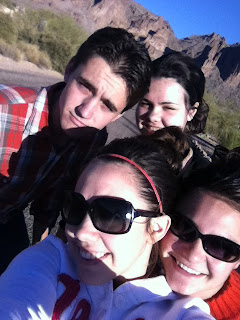 Aside from his incredibley good looks, and his great personality, what REALLLLLY stands out to people about Roy Lee Allison the 4th, is this young man's CHARACTER!!! Yes, his CHARACTER!!! Roy is known to treat everyone with the utmost respect and kindness. He is always very polite, stays clear of drama, NOT a gossip and overall never has a bad thing to say about anyone. One person said,
"You can't tie ANY scandal to his name!"
.
"The measure of a man's real character is what he would do if he knew he never would be found out." ~Thomas Babington Macaulay
.

Roy doesn't live his life on the edge trying to see what he can get away with. If his pastor says NO... Its NO! With a firm conviction that NOTHING is worth going to hell over. When it comes to church and the things of God, it is said of him that he is extremely devoted. If it comes to his walk with God,
HE KNOWS how to WALK THE LINE LADIES!!!
.

Roy was nominated by soooo many different individuals over a long period of time!!! EVEN one of the guys from his church suggested him to me one time and I mean come on lets face it, guys are super-competitive soooo he must be pretty awesome for one of his buds to suggest him to me!!! One person, who is NOT known to just pass out random flattery straight up told me,
"Roy is PERFECT!"

.
I was like WHAAAAAAAAAAAT?!?!? LOL They were like, no really, even though I know you wouldn't post any of his faults, (I wouldn't???;) I HONESTLY can NOT think of any negative thing to tell you about him!!! I was like WOW!!!
.
It is said that...
"A man's character is like his shadow, which sometimes follows and sometimes precedes him, and which is occasionally longer, occasionally shorter, than he is."
.
As tall as Roy may be, his CHARACTER precedes him and is by far longer than his physical height. Let me tell you something ladies, it will take a VERY special, Godly, PERFECT kind of young lady to come sweetly riding in to tame and lasso this...
.
COWBOYS HEART!!! 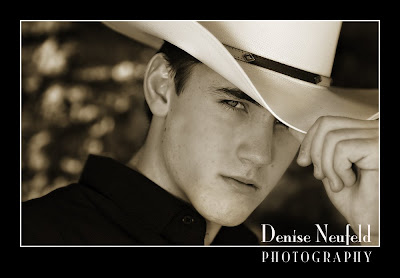