Okaaaaaaaaaay soooo the Gordon Mote concert was soooo AWESOME!!! I was telling some of my friends on group me, (Its a really cool app for mass text messaging) earlier in the day that I was going to hear him sing and one of my friends, Jedidah was like Mary I didn't know you liked southern gospel music!?! I'm like, Oh GIRRRRL YOU KNOW IT!!! AHAHA!! I'm like HEEEEEEY I was raised by THE ABBOTTS, like i ever had a chance to ever like anything else!!!! Southern gospel is IN MY BLOOD!!!
.
Then I was like, what music did you THINK I like??? Cuz I was almost positive i knew what she was gonna say! And SHO nuff I was right, she texts back and says, BLACK GOSPEL!!! AHAHAHA! I sooooo knew it!!! I was like weeeeellll.... I must say THAT, in my personal oppinion, there is NOTHING better than an ANNOINTED BLACK MAN IN DA HOUSE singing!!! Can I get a WOOOOT! WOOOOOOT AMEN?!?! Buuuuuuuuut I must say that in the music world thats not what I hear a lot in black gospel...its a little bit TOO MUCH TALKING annnnnd NOT ENOUGH SINGING!!! I mean some talking is good but its like okaaaay we're going on five minutes and its on a professionally recorded CD, NOT at church...HELLOOOO!!! Plus there is WAAAAAY to much repetition!!!
.

Okaaaaaaaay back to the Gordon Mote Concert!!! Sooooo this is the prelude before the concert, got a picture of the guy in front of me's head...I was bored and just couldn't resist...LOL...anyways this guy kept laughing at Gordon Mote's Blind Jokes, his laugh was sooooo funny it kept making me laugh harder!!!

The WHOLE time we were driving over there Jose made us play over and over and OVER AGAIN Gordon Mote singing SHUT THE DOOR!!! Jose said thats ALL he wanted to hear him sing!!! When he came out onto stage I just felt this feeling of exhileration in me...Then he just started singing, right off and MUCH to Jose's surprise and delight...SHUT THE DOOR!!! I was like ooooo yeah!!! 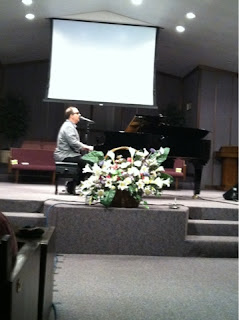 He gave us all a lil bit of his musical testimony. So he has been blind since birth, buuuut at three years old he just walked up to the piano and started playing, "Jesus Loves Me!" HOW TOTALLY AMAZING AND AWESOME IS THAT??? He plays completley by ear and it is really sooooo beautiful!!! He like went off at one point just all cRaZy on the piano...it was soooooo COOL!!! I like watching his fingers just like DANCING over the keys!!! Soooo AWESOME!!!

Soooooo during the concert my brother is all texting me and is like, MARY you should JUST MARRY HIM!!! I mean just think, you would NEVERRR have to diet again!!! I'm like WOW!!! AHAHAHA!!! He's like, i'm just saying!!! I'm like okaaaaaay thanks for lookin out for me buuuuut he is MARRIED...to an absolutely BEAUTIFUL woman!!! Thanks OH wonderful brother for lookin out for me tho!!! LOL
.
Gordon Mote has a very good sense of humor about being blind and was cracking a lot of jokes about that! He was making fun of his helper, that leads him on stage saying that he was practically deaf and that he should get a hearing aide and the guy is like well you don't get a seeing eye dog, and he says, NO I DO have one...ANNNNNND I NEVER thought he would be deaf!!! AHAHAHA!!! 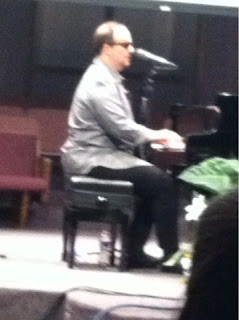 He ended the concert with Gospel Ship, I LOOOOOVE that song!!! Then when the concert was over and his helper and him were walking down the aisle when they walked by me I whooped and hollered and clapped and screamed and cheered SOOOOO LOUD Alyssa was like, Okaaaaaay Mary, Your gonna make him DEAF now too!!! 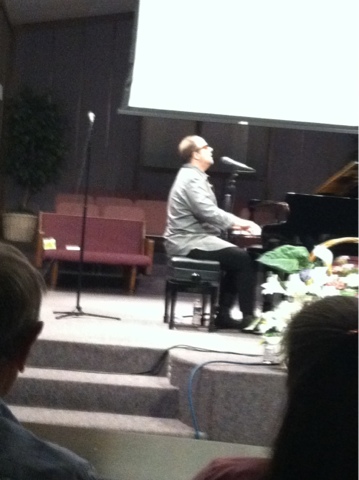 He mentioned once while he was talking making jokes that EVERYONE looks the same to him...which led too...My random thought for the evening, was this...EVERYONE IS BLACK IN HIS WORLD!!! He is a total chocolate LOVERRR!!! To HIM...His wife...drum roll..is BLACK!!! HOW COOL IS THAT!!! THEN I realized...Like OMW...that means to HIM...I'm BLACK TOO!!! YESSSSSSS!!! I FINALLY accomplished my childhood dream, EVEN if its ONLY one person that sees me as black!!! Woot! Woot!!! AHAHAHA!!!  THANK YOU GORDON MOTE for making my dream come true!!!!!! :))))
. 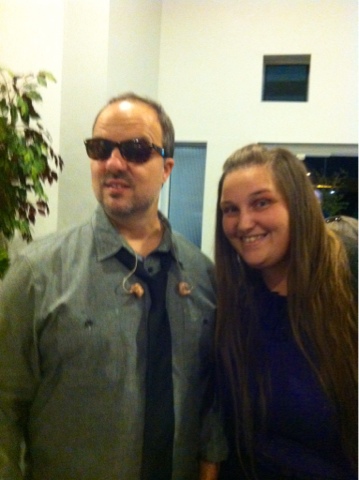 See, in this pic, its NOT just me with Gordon Mote, its ME... FINALLY black!!! :)
.
I talked to him for a little bit...told him that my favorite song that he sings is, I can't even walk without you holding my hand, and he said that he'll do it for me NEXT YEAR!!! He BETTER cuz I sooooooooo won't forget!!! I told him that our group was Pentecostal...Then I told him about my blog and gave him a card for it, he said he would give it to his wife and have her look at it!!!
Cara got his autograph... 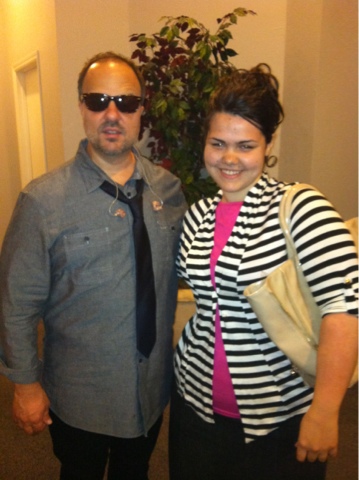 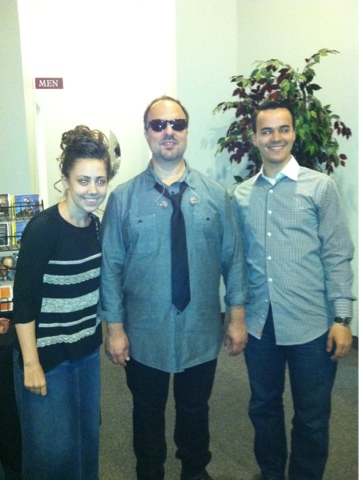 We were all pretty much the last ones left at the church and when him and his helper were walking to the bus to leave I yelled out BYE!!! Annnnnnd they said bye annnnd then THEN I yelled out ONE more time...ANNNND DON'T FORGET ABOUT MY BLOG!!!
.
Annnnnnnd Mary Jo absolutely LOOOOVED and adored him!!! So when we're standing in line in the foyer of the church for pics and stuff, right when it gets REAL QUIET, MJ says,
"Mom, I like really, want him to be... 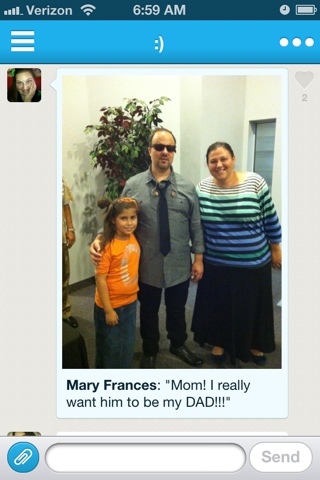