I listened this morning to an AWESOME message on Holy Ghost Radio!!! It was about Joseph, the earthly father of Jesus!   He was talking about WHAT was it about Joseph that God would want him to be his daddy??? He said the Bible doesn't say much about him but the little that it does shows his Characteristics that God liked!!! Joseph was...
Kind
Patient
Obedient
Unselfish
His chose an ordinary, probably quiet, not well known but hardworking, faithful, steadfast man to be his daddy!!!! And he must have trulelY been a good father to Jesus because when Jesus grew up he even took in his fathers trade as a carpenter! It shows that Jesus wanted to be like Joseph, his daddy!!!
.
Then he talked about how it wasn't just that Mary was a good girl, it was also because she was with the RIGHT man!!! It wasn't just Joseph and it wasn't just Mary, it was both of them combined together! And he talked about being and choosing the right person so that TOGETHER, you can be used of God!

I HIGHLY reccomend this message to everyone especially Apostolic young people!!! There is so much more that he says!!! You can order it through HGR!!! 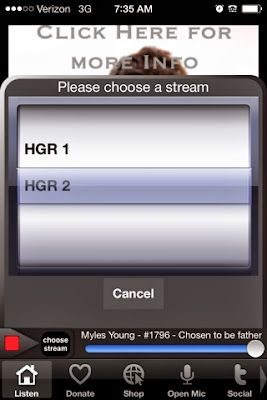