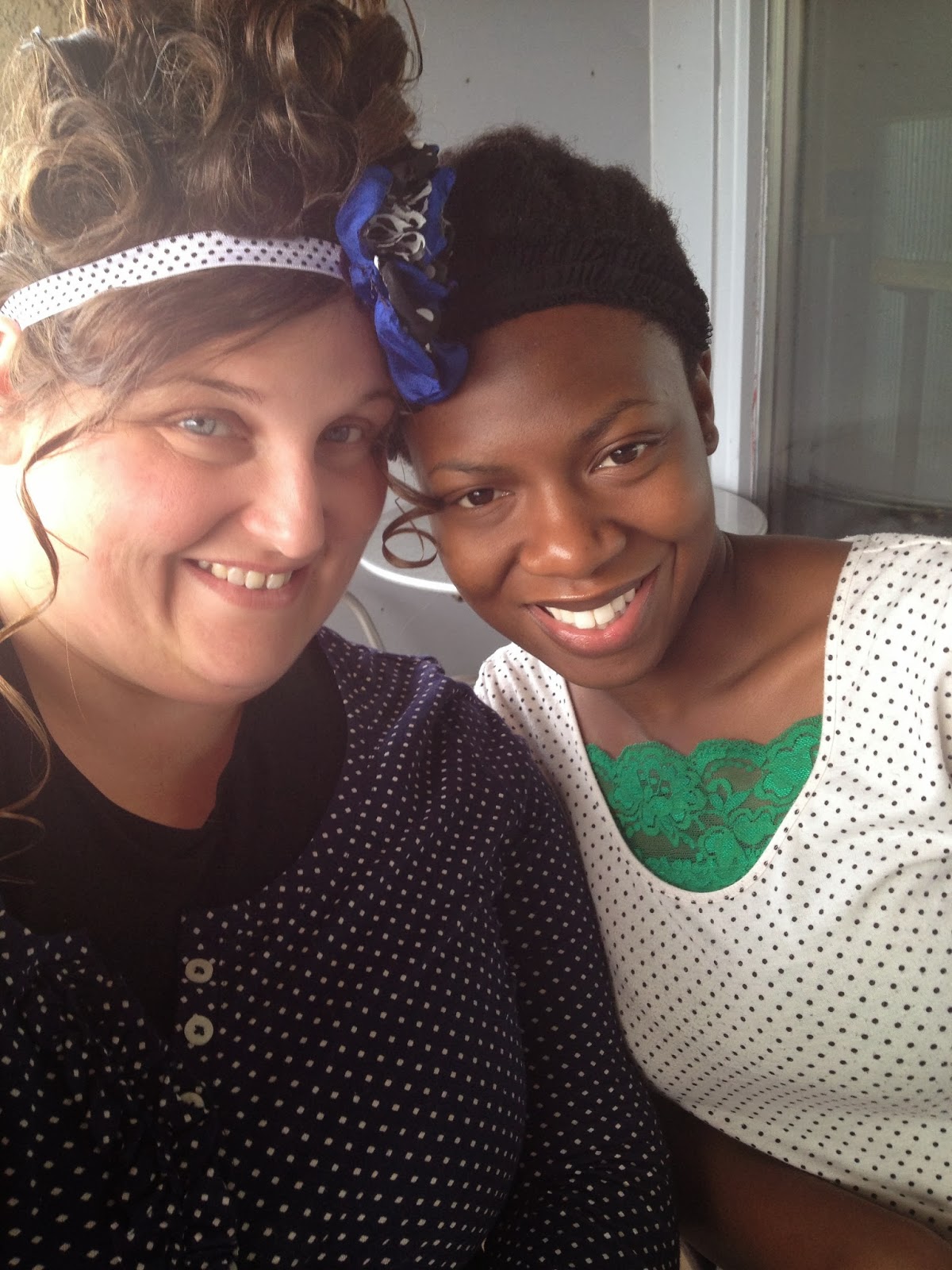 The next morning Jen and I were ALL polka-dotty...I was supposed to meet friends for breakfast buuuuuuut alsas...going to bed after 4 am usually does NOT mean that you will be getting up on time!!!! Howeverrrr we did all go to Chipolte for lunch annnnnnnd oooooo that burrito was soooooooooooo GOOOOOOOOOOOOOOOD!!!! 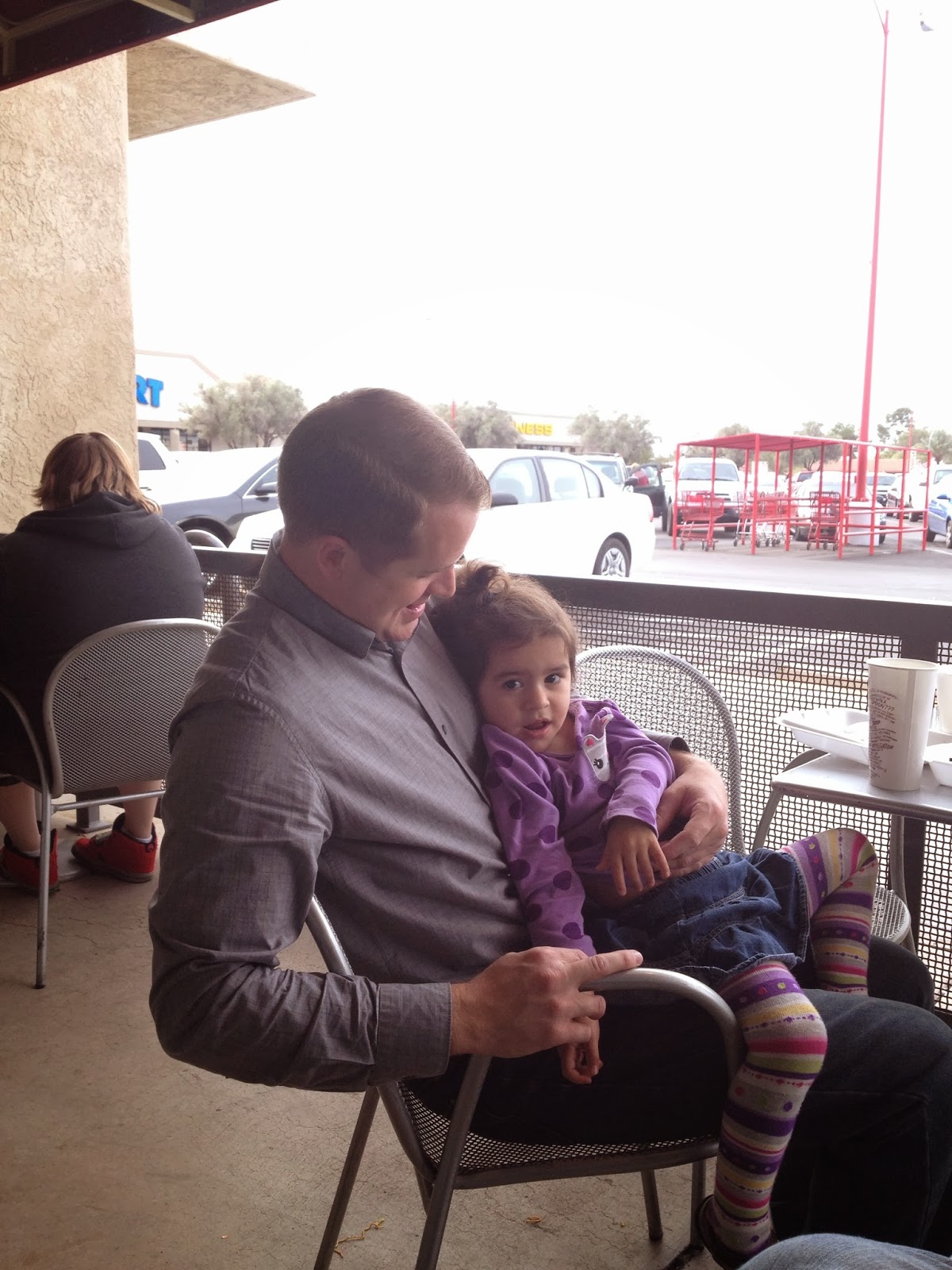 Kenzie and Daddy!!!! Awwwwwwww Makenzie has quite the little personality!!! Sooooooo I have to tell you all a FEW funny stories about her!!! Soooooooo on the way to conference I was entertaining everyone with impersonations of one of the Sunday School kid's mother as she disciplines her children!!! She'll like turn around annnnnd ALL DRAMATICALLY be like, DISreSPEEEEEEECT!!!! DISreSPEEEEEEECT!!!! Then when they're really being bad she'll be all like, WOW!!! Ya all are really SHOWING OUT!!! Really showing out!!!
.
Weeeeeeeellllll a little bit later Kenzie was misbehaving and she was like in her car seat just wailing annnnnd WEEEEEEL really SHOWING OUT!!! Now, you have to understand that the Karlson's nickname for me is Mar Dog...don't really know WHY, its just something Bro. Sam started called me waaaaaaaaaay back in the day and when he married Janelle she picked it up too....Soooooooo still imitating the voice of this mother i'm like, Kenzie, DISreSPEEEEEEECT!!!! Now she's sitting in the front row of the van annnnnnd i'm sitting in the third row buuuuuut when I say this to her, without even turning around she waves her little arms up in the air and yells out, BE QUIET MARY DOG!!!! OoooooooooH we all like DIED laughing!!! I mean just the fact that she would first of all, automatically know it was ME, second of all, YELL at ME, buuuuuuut still using my nickname!!! it was TOO FUNNNNNNY!!!
.
Then later on in the conference she was really, SHOWING OUT again in the van...sooooooo I was like, KENZIE, DISreSPEEEEEEECT!!!! She's all, THATS IT!!! Your NOT going to my birthday party Mary Dog!!!! AHAHAHAHAHAHAHA!!!! Toooooooo FUUUUUNNNNNY!!!! Now on the way home she was a DELIGHT!!! She talked with us all....and she played Daddy Dinosaur with Stultz for like an hour...everytime he would put his down to go to sleep she would be like, ROOOOOOOAAAAAR Daddy dinosoaur and she would have him ROOOOOOAAAAR back at her...she did that over and over and over again...then all of the sudden she just CONKED out!!! Like she just roared herself to sleep or something!!! LOL 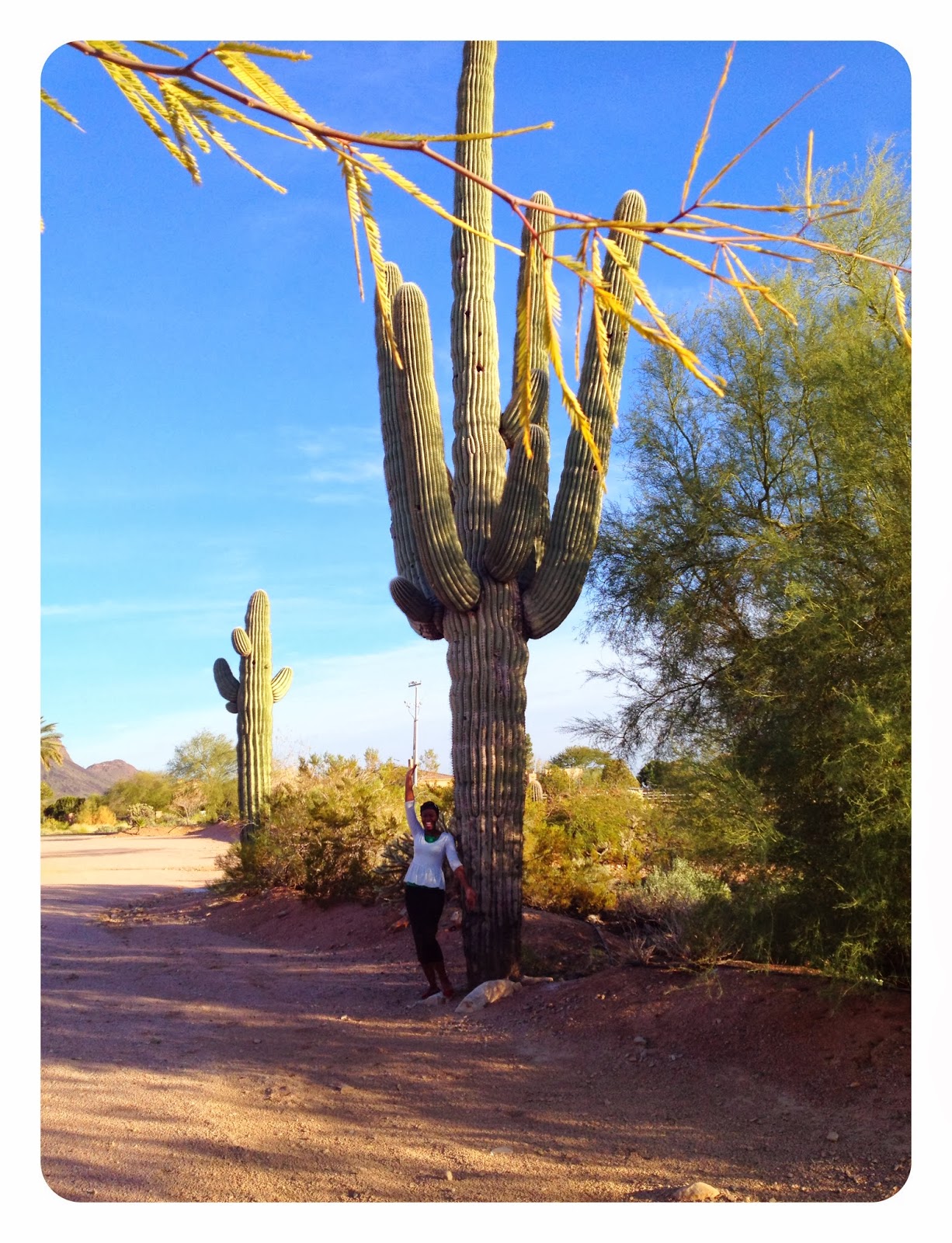 Now once we got back to the church I became a desert botanist for Jen!!! 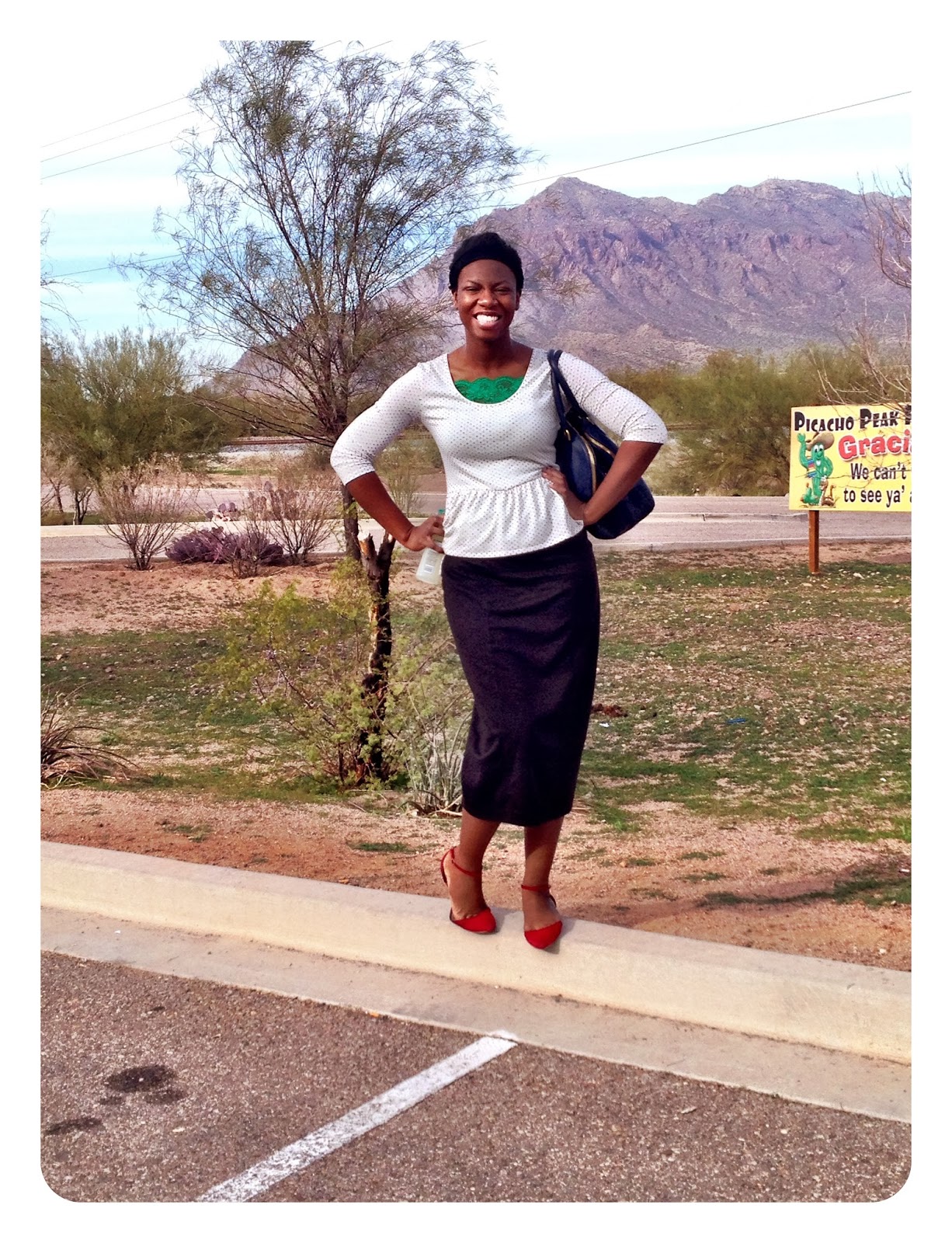 I was telling her the name of all the Cacti!!! I'm like, okay this is a prickly pear, this is a barrel cactus... This is a Saghauro, 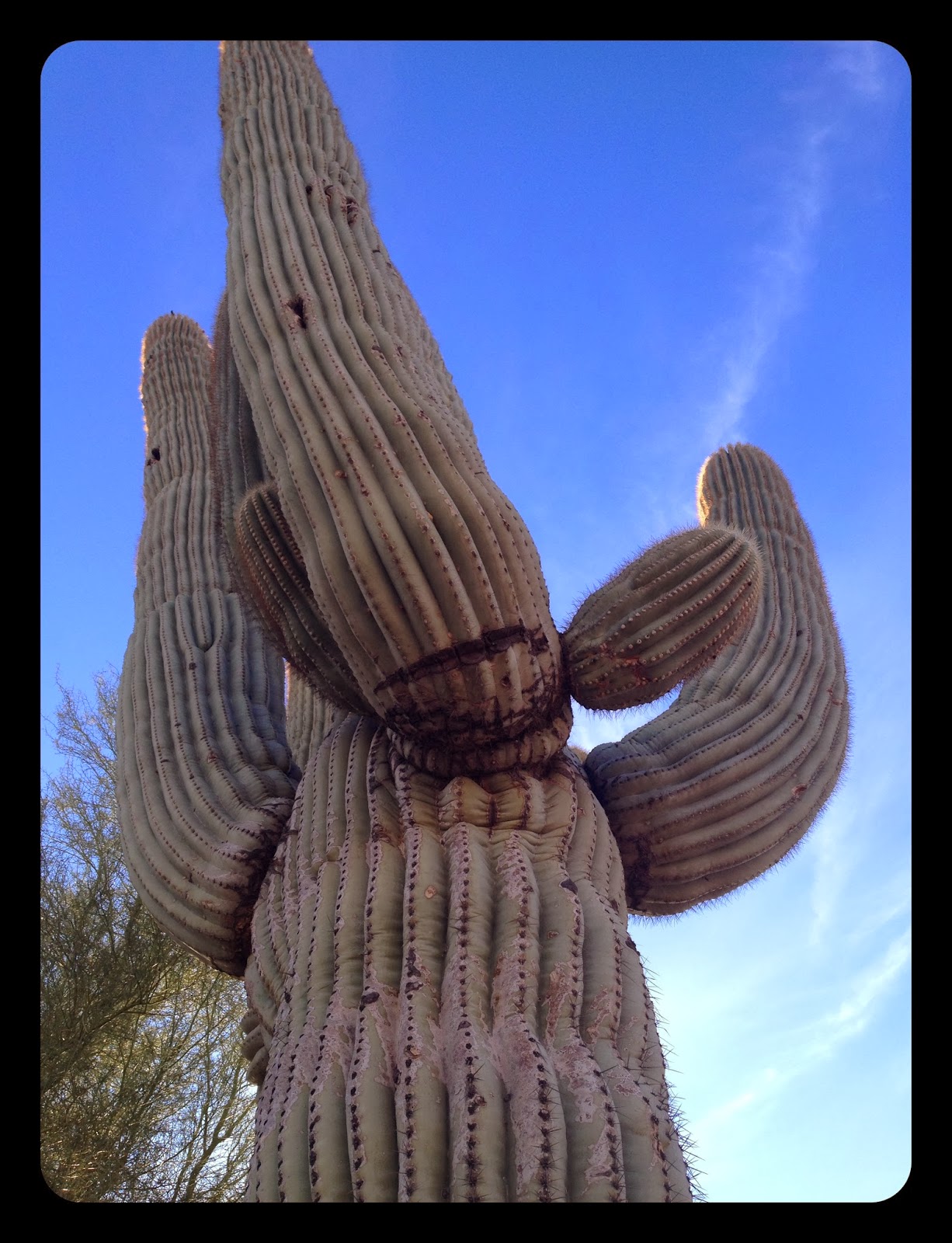 I was like sooooooo proud to know the names of everything...Liiiiiike I felt superrrr smart!!!! I mean, I grew up in Cave Creek sooooooooooooo basically, the desert was my hood growing up...I used romp through the desert in flip flops...I can't even begin to tell you just how many thorns I've gotten in me... A LOT!!!! Sooooooooo yeah, I'm just feeling like SUPERRRRR SMART!!!
.
I'm like, oh yeah annnnnnnnnd this cactus right here is called a Jumping Cholla annnnnnnnnd whatever you do, do NOT get to close to it!!! They really are called JUMPING for a reason!!!! I'm like, they're also called the teddy bear cactus cuz people thing they look Cuddly...BUUUUUT they are NOT!!! Jen's like, Oh its soooo CUUUUUTE!!! I personally have neverrr seen a "Cute" Cacti, buuuuuut OK!!! LOL 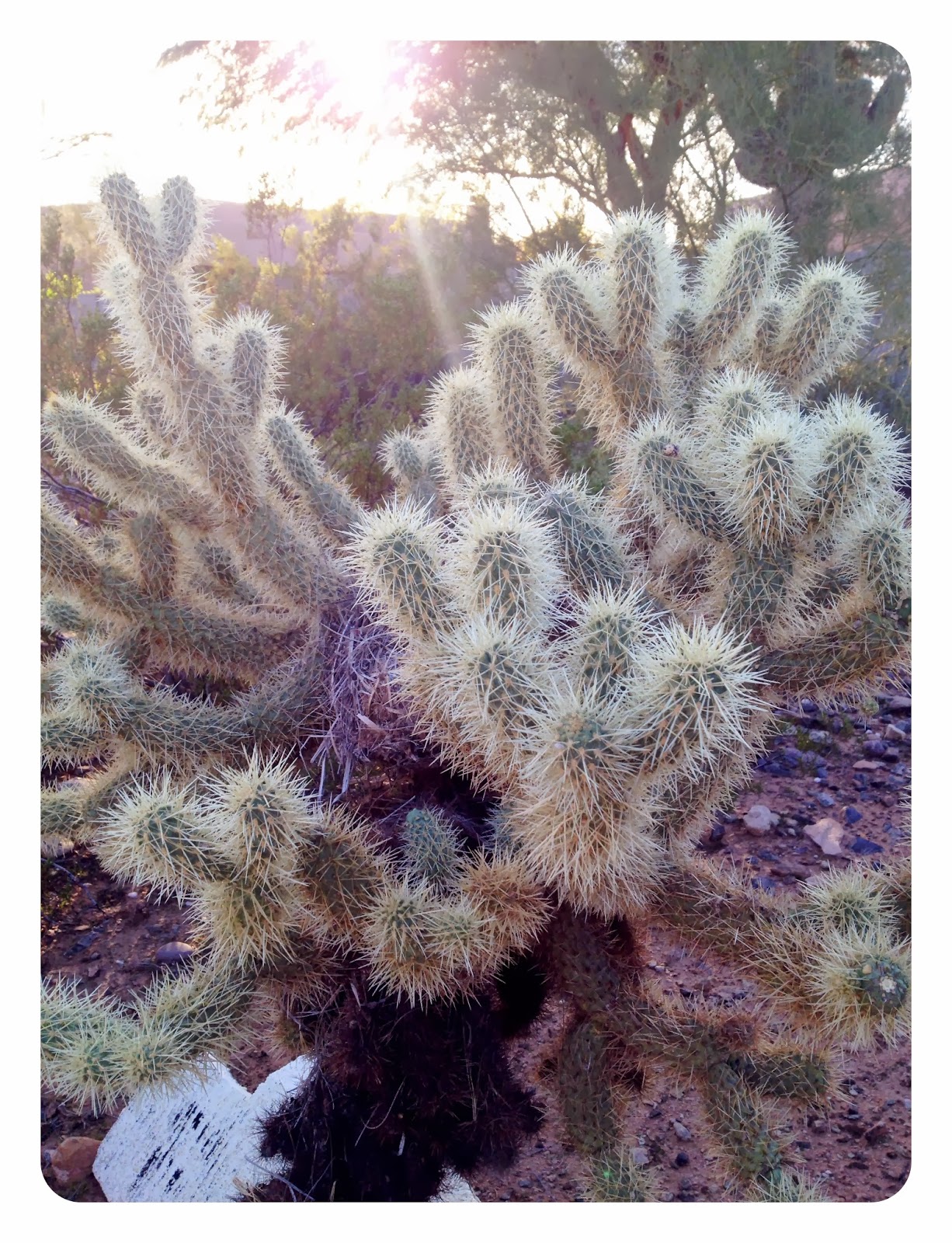 Then Jen's like, what is this plan Mary? I'm like, Ummmmm...that's what we call a Desert Bush...LOL...then she points to another cactus and is like, whats this called??? I'm like, Ummmmmm, UH, that's what we call A UH....An UNjumping cholla!!! She's like, OK really Mary! The Botany tour is over!!! AHAHAHAHA!!!! She caught me!!! LOLOLOL
.
Soooooooo then we were just hanging out at the church for a while till it was time to take Jen to the airport!!! Weeeeeeelllllll its FINALLY time to take Jeeeeennnnn annnnnnnnnnd would you believe THAT my car wouldn't start!!! I was like about to have a panick attack thinking that something was really wrong with my car...THE HUNK...buuuuuut it turned out that someone...NOT ME...hadn't clasped their door shut all the way...LOL...sooooo they tried to jump it buuuuut the jumper cables in the church van were USELESS....buuuuuuuut after they got another pair annnnd like an hour later...THE HUNK roared to life...*oh be still my beating heart!!!
.
THEEEEEEEEEENNNNNN... We rushed Jen to the airport annnnnnd she said she made it to her gate, JUST IN TIME!!! Not gonna like tho...I wouldn't have minded if she had missed it and had to stay with me for a while longer!! Your welcome back ANY time Jen!!! Everyone in my church thinks your AWESOME!!! Annnnnd of course I PROMISE Italian food!!! :))))
Anywayz, the NEXT morning at church, Pastor was concerned about my car!!! He's like, so did it start up ok today! I'm like, oh yeah, there wasn't ACTUALLY anything wrong with the car...I'm like, ya know, i'm not really pointing fingers anywhere, buuuuuut its just cuz one of the doors didn't clip shut on the car soooo the battery went dead... I continue talking to pastor, of course I'm fiiiiiiiine with it because I know it was just an ACCIDENT and ACCIDENTS HAPPEN...buuuuut I'm jus' sayin' that it wasn't MY FAULT!!!
.
Pastor says, OH WHATeverrrr, your THE ONE thats in the owing anywayZ!!! I'm like, HEEEEEEEY, When something is MY fault, I take the blame for it...weeeeeeeeeeelllll I take 99.8% of the blame for it... OF COURSE theres ALWAYS that .2% that's floating around out there that belongs to others!!! Heh, heh!!! Pastor just walks away shaking his head...his USUAL response to ME!!! AHAHAHAHAHAHAHA!!!!