Soooooooooo we had a SLIGHT Classic Mary Moment at the Gaither Homecoming last Friday!!! LOL Soooooooo they passed us out these lil light key chains that your supposed to hold up in the dark and wave them during the concert..they're actually lil key chains buuuuuuuuut my key chain broke off BEFORE I had even fully opened mine...HAHAHA...Soooooooo ANYWAYZ... I LOOOOOOOOOOVE MY LIL LIGHT 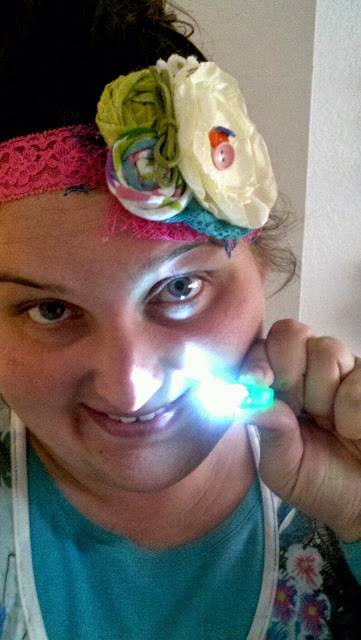 annnnnnnd felt the need to have it out and waving it at EVERY CHANCE  could get!!! Weeeeeeeeelllll at ONE POINT I heard the people behind me kinda huffing as I waved my light!!! I was just like okaaaaaaaaaaaay PEOPLE...LIKE REALLY???  I mean, yes most of the people around us had WHITE HAIR...buuuuuuuuuut after all, BILL GAITHER did have these handed out and after paying $43 to go I was GOING to get my money's worth of waving...so the Gaither vocal band was singing a very slow song while I was waving my lil light...I was feeling it...Must we have SUCH AN ATTITUDE about it???
.
I lowered my light and as it hit me in the face...I REALIZED...

I had been waving my light BACKWARDS blinding all the folks behind me!!!!