Last night you guys, it was ABSLOUTE cRaZiNeSsSsSsS!!!! We get to the classroom last night it was just CHAOS!!! Now you all should know that I AM NOT good at taking charge in large group setting of kids...soooo it was WILD!!! We REALLY NEEDED Sis. Abbott in there!!! AHAHAHA!!!
. 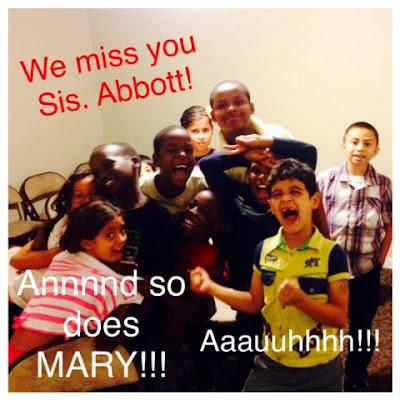 (It may NOT look like that many kids in the pic, buuuuuut you can't see the ones that are being dog piled, the ones in the bathroom, the one in the adult class for mis-behaving and the ones in the youth class!!!)
.
Now Sis. Abbott had emailed me the lesson to go over annnnnnnnnnd I did!!! I brought it up on our desktop and studied it out yesterday...I was ALL READY...buuuuuuuuut when I got to the classroom, Sis. Abbott had forgotten to leave out the actual lesson book...buuuuuuuuut I didn't know that....and the OLD one was out sooooo I assumed that was the book...weeeellll i'm flipping through the book annnnnnnnd I can NOT find the lesson...MEANWHILE...
.
The kids are just bouncing off the walls...like whats going on??? Mary, Why aren't you teaching??? Mary can we just have candy? Mary Do we get a snack? Mary, Can I get a drink? Mary, Can I be in the teens class? Mary, Are you going to tell my mom I was bad? Mary, he is hitting me!   MARY! I have to go to the bathroom!!! I'm like, you guys BE QUIET, I'm trying to figure this out...They're like, WOW!!! This is BORING!!! Sis. Abbott is WAAAAAAAAAAAAAAAAAAY better THAN YOU!!!
.
I'm like, SHUUUUUUUUUUUUUUUT UUUUUUUUUUUP!!!! (I know, I know, I won't be getting any teacher of the year awards for that!!! lol) If you guys don't stop talking your going to the adult class!!! Immeditately they all start saying, Mary? I'm being good!!! another kid, Ok! I'll be good!!! and another, Yeah i'll be good! Someone else says, Mary, they are still talking! I'm like, YOUR ALL STILL TALKING,  I SAID NOT TO TALK!!! Even if your telling me that your NOT...The next person that talks is GOING TO THE ADULT CLASS!!! one more kid just HAD to speak up, "Mary, am I BEING GOOD???! I'm like, NOPE! I SAID NOT TO TALK annnnnnnnnd you just did... your GOING TO THE ADULT CLASS!!!
.
The class GASPED as we marched off...I'm pretty sure Sis. Abbott woulda been pretty proud of me for ACTUALLY following through and doing that!!! When I got back, the classroom was somewhat subdued, I then informed them that if they continued to act that way I was going to put their name on a list and give it to Pastor Abbott when he got back into town and then THE PASTOR would be calling their parents!!! I'm like, WHO wants THE PASTOR to CALL THEIR MOM??? They're eyes were sooooooo BIG...I'm like YES, that's RIGHT, I said THE PASTOR is gonna call YO MOMMA!!!
.
Then after that the class calmed down ENOUGH for me to AT LEAST teach the lesson...which I managed to find on my phone what Sis. Abbott had emailed me!!! (THANK GOD FOR iPHONES!!!!) My helpers, Sis. Everleen and Bro. Tommy said it went well....buuuuuuuuut IDK...AHAHAHA!!!!
.
NOW in the VAN!!! 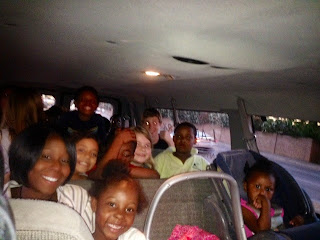 I'm really thankful to have had one of the Chocolate Mommas with us!!! Man she was helping us out!!! The kids are like, MARY! They are cussing!!! She's like, CUSSING??? CUSSING??? In the church van??? WHAT IS WRONG WITH YOU GUYS!!! We don't cuss on the church van...well we shouldn't cuss at all...BUUUUT ESPECIALLY NOT ON THE CHURCH VAN!!! The NEXT person that cusses is getting themselves PRAYED FOR annnnnd then YO mouth washed out with SOAP!!! 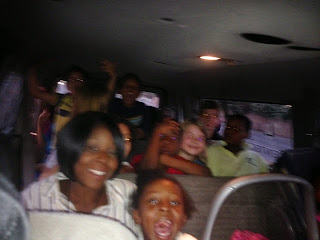 AHAHAHAHA!!! We're like JAM-PACKED in there and one of the girls yells out, EVERYONE IN THE VAN NEEDS TO START WEARING DEODORANT!!! Me and Tommy start laughing sooooo hard!!! I was like, Ooooo yes!!! PREACH on that for a while sistA!!! Someone get this girl a MICROPHONE!!! There HAS to be a scripture on this SOMEWHERE in the Bible!!!  (Heeeeeey I had my deodorant on...mine and enough for everyone else, plus I do a mini shower in body spray and perfume...I'm like a walking deodorizer in the van!!!)
.
Then on the way back, Chocolate Momma again yelling at the kids for us. "WOW!!! you all are REALLY SHOWING OUT!!! What is WRONG WITH YOU GUYS!!! DIS-RESPEEEEECT!!! This is a CHURCH VAN!!! Not just any van...A CHURCH VAN...THIS IS GOD'S VAN!!!
.
Its like silent for about 15-seconds...THEN...in the darkness a voice spoke up in a whisper...
ACTUALLY this is MARY'S VAN!!!
.
I like busted up laughing...I'm like, UH NO ITS NOT!!! (I had to clarify cuz I ain't about to take God's van from him!!!) I mean really, you all think at age 31 I just HAPPEN to own a 15-seater with the church name and number on it??? Even I'm NOT THAT COOL!!!
.
Finally by ten, after missing moms that got pulled over by cops, a bed bug scare and a few other things...WE WERE DONE!!! I was like ready to just pass out!!! Tommy's like, its ok Mary, we did it!!! We made it through ANOTHER night doing the work of the Lord!!! I'm like AMEN AND AMEN!!!
.
Annnnnnd now that its the next day...I'm ready for THE NEXT TIME!!! I have to say, working for THE LORD is the best life there is!!! Bringing souls to Jesus...that's what its all about!!! Annnnnnnnd I know that SOME DAY life will change, when I have my own kids, I know that I will have different responsibilities that may keep me from being able to do the things that I do now as a single person, buuuuuuuuut I'm glad that when that does happen,
I'll be able to look back and know that...
WHEN I COULD,
I DID IT!!!
♥Mary Frances :)
.