Had FUNNNN last night at the state fair!!! Me, T and MJ met up with the Abbotts, Seth and Alyssa, Sam and Janelle and Stultz in the rodeo arena...I kinda got BORED tho...I mean, there is only SOOOOO much time I can watch STUPID, IDIOTIC MEN get bucked off of horses and roll to the ground like battered rag dolls...I was like, I would ACTUALLY be impressed if they could do that ANNNNNND take a SELFIE!!! AHAHAHAHA!!!
.
Then they started roping cows and I was like, OMW! I think I hear a deep fried reeses calling my name...or maybe its some deep fried nutella??? NOOOO it was definitely a DEEP FRIED REESES!!!
Annnnnnnnnnnnnd a CORN DOG!!! 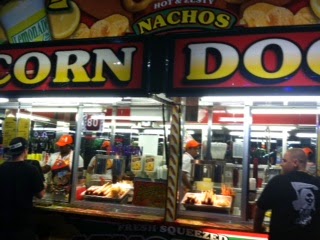 Then I couldn't believe it cuz I found ANALI'S BOYFRIEND!!! 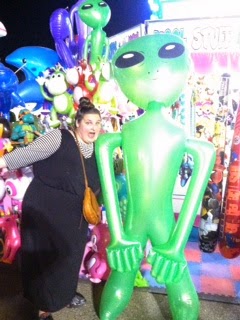 Then me and T were watching IDIOTS bungee jump from their feet first...annnnnd if they were to scared to jump they would get pushed and everyone on the ground stood around booing or cheering!!! 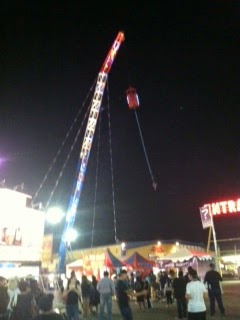 Then I saw THE CUTEST everrrr umbrella at the AZ Republic stand...it had comics all over it!!! Sooooo my sis updated her subscription and the guy gave me one...said it was a $25 value buuuuut for ME, it was FREE!! I'm riiiiiight!!! LOL Buuuuuuuuuut I was sooooo THRILLED that I got this adorable new umbrella annnnnd ya know I was really NEEDING one cuz it rains SOOOOO much here in ARIZONA!!! ;)))) Then me and MJ started going on rides together!!!
First ride was the Log jammer water ride!!! MJ was sooooo scared going down the BIG steeper stretch, buuuuuuuut she leaned against me and I wrapped my arms her really tight and we SCREAMED together at the top of our lungs as we went down!!! 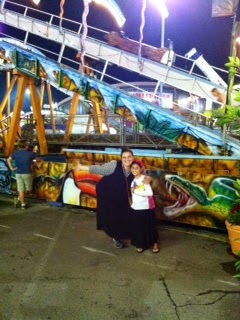 We hit the bottom and she was laughing!!! I was like, OH YEAH THATS MY GIRRRRL!!! I mean, its hard to be to scared when your nestled against Mar Bear!!!
.
BY THE WAY!!! Everyone else in my church IS TO CHICKEN TO RIDE, RIDES AT THE FAIR!!! You wanna know what Stultz said??? (I'm paraphrasing...and in case you can't tell the whole convo was NOT in seriousness! LOL)  HE SAID, the he LOVES rides buuuuuuuuuuuuut that its NOT SAFE TO RIDE THEM AT FAIRS!!! Cuz ya know they're travelin and bein taken a part and put back together all the time...I'm like, Stultz, HOW is your salvation? Arent you ready to meet Jesus??? He said, I'm ready to meet Jesus, BUUUUUT there is STILL A WORK that needs to be done!!! I was like, WOW!!! Sooooooo SPIRITUAL!!! He's like you know, you don't just throw yourself into dangerous things...I'm like, RIIIIIIGHT...WHATEV..
.
Buuuuuuuuut you know what, I thought about this BEFORE the fair and I was waiting till after to say something, JUST TO MAKE SURE I WAS RIGHT, which we KNOW I ALWAYS AM, Annnnnnnnnd sure enough I WAS!!! Soooooooooo Stultz, WHAT ABOUT THAT DEEP FRIED REESES THATS STARTED CLOGGING YOUR ARTERIES?!?! Isn't THAT dangerous too???Huh, huh/ huh? HUH????
.
Anywayz, after the log ride, we met back up with Seth, Alyssa and Stultz who stayed for  the entire rodeo. Alyssa said to find them by the bungee jumpers buuuut when we got ever there, I didn't see them... all of the sudden I felt someone tugging from behind on my purse strap sayin, GIVE ME YOUR PURSE WOMAN!!! I of course SCREAMED, then started laughing...it was JUST STULZ!!! Alyssa had dared him!!! HAHAHA!!!! 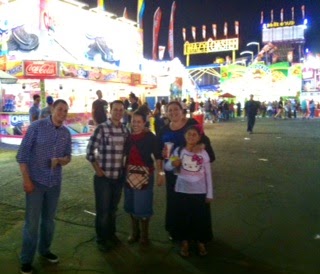 Then me and MJ went on the CRAZY coaster...TWICE!!! 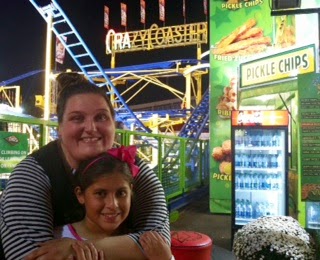 Im soooooooo glad I had someone to go on rides with...I JUST LOVE RIDES!!! The crazier they are, the more HYPERRRR I am when I get off!!! 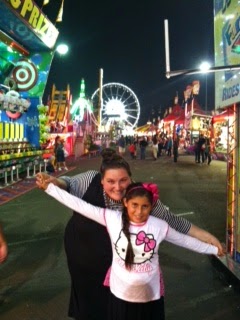 After the second time on the crazy coaster I realized that my COMIC STRIP UMBRELLA WAS MISSING!!! Someone had STOLEN IT!!! Soooooooo I dragged our group over to the Arizona Republic booth to see if they would give me another one!!! I was PRETTY SURE I could talk them into in!!! At first the guy said he couldn't...buuuuuuuuut then he said he would...JUST FOR ME!!! I was soooooooo excited!!! I said THANK YOU to him like a kajillion times!!!! And he said, God bless you!!! Soooo I gave him a church card and invited him to our church...WHO knows, maybe that's WHY my umbrella got stolen in the first place...#YOUJUSTNEVERKNOW!!! 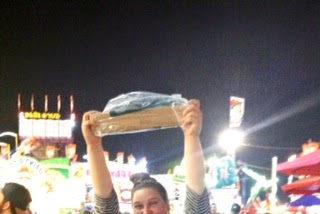 Anywayz, I'm now properly prepared with CUTENESS for ALL THE RAIN we get over here!!! Wooooohoooooo!!!! The fair was a blast and Im always thankful to have good friends to fellowship with!!! Then after the whole umbrella incident, that was pretty much the end of the night!!!!
Weeeeeeeeeeeeeeelllllllllll I mean aside from ME getting pulled over by the cops after midnight.........buuuuuuuuuuuuuuuuuut that's ANOTHER STORY, FOR ANOTHER TIME!!!! ;)))
♥Mary Frances :)
Posted by Mary Frances at 11:37:00 PM