Okaaaaaay soooooooo I have to say that of ALL the resturaunts that we have been trying, THIS ONE has been my favoriteist SOOOOOOO FAR!!! Annnnnnd really people, its NOT JUST BECAUSE EVERYONE working there is BLACK annnnnnnnnnd that 75% of the people eating there are BLACK...buuuuuuuuut it was PRETTY AWESOME!!! Told my pastor before we left, I'm TAKING SOME CHURCH CARDS!!!! (Lolo's Chicken And Waffles! HERE)

It was superrrrr crowded so T and MJ got their own table so they wouldn't have to wait as long...they just switched locations now tho so its supposed to have more space! 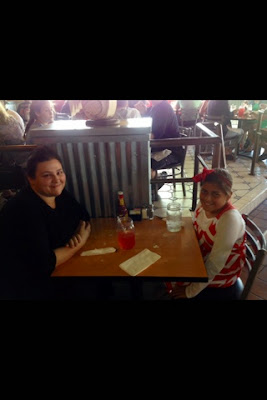 The first REALLY cool thing I notices was that they had black gospel music blaring through the speakers...the rest of the week its HIP HOP buuuuuuuuut on Sundays, ITS GOSPEL!!!
.
Okaaaaaaaaaaaaaay ON TO THE FOOD!!! It was AMAAAAAAZING!!! You better go hungry and be prepared to gain wait...FO REALZ PEOPLE!!!
This is THE BEST CORN BREAD EVERRR!!! 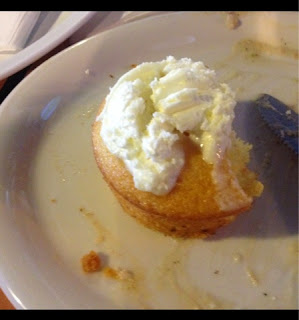 (Besides YOURS MOMMY POO!!! Its good buuuuuut it  ain't like Mommas! Purrrrrrrrrrrr!!!)
To eat I got chicken fried chicken with corn bread, smothered potatoes and WAFFLES!!! 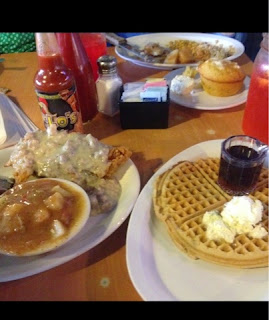 The only thing that I wouldn't get again is the smothered potatoes...they were kinda like BLAH!!! Others said that the house fries, (Fried potatoes with peppers and onions) Were really good and also the mac and cheese!!! 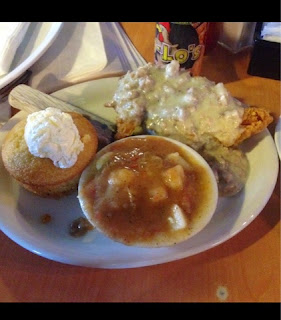 I'm telling you guys get a LOAD OF THIS CHICKED FRIED CHICKEN!!! its better than cracker barrels!! 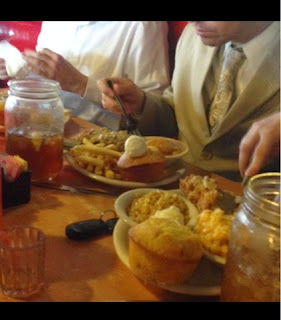 You can also just get fried chicken!!! 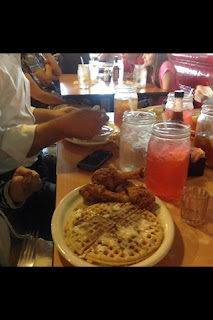 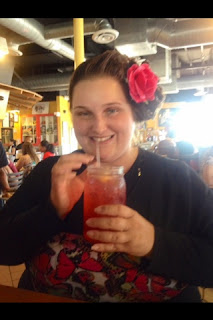 Our waiter really NEEDS get in church too...that's ALL I"M SAYING PEOPLE!!! Not that I was flirtin or nothing...I don't flirt with THE WORLD!!! Besides I can't even flirt...i'm like soooooo AWKWARD...like I was trying to flirt with this Apostolic black guy once and I broke out with this fried chicken joke...annnnnnnnd then I heard that people were offended by it soooooooooo I apologized up and down about it to EVERYONE trying to explain that i'm really NOT racist and that I just LOOOOOOOVE black people...I'm like giving my history of carrying around a black baby doll since I was four...THEN IN THE END...I found out that it wasn't even black people that were offended by it...it was WHITE PEOPLE!!! I was like REALLY??? White people??? I"M SOOOOOOOOOOO CONFUSED!!!
.
Anywayz, I said all that to say that I was NOT flirting with the waiter...we did have like a FIVE MINUTE conversation about his FAVORITE flavor of Koolaide tho!!! AHAHAHAHAHA!!! Seth told me later on that he was trying so hard not to laugh about this IN DEPTH conversation about KOOLAIDE!!! LOLOL!!!
.
Then that night one of the girls told me that they fell on the way out! I was like WHAT???? I totally missed that!!! She was like how could you NOT see that?! I was like, Oh cuz I was still at the table waiting for the waiter to bring me my change! Soooooooo shes telling me the whole story about how she fell cuz the floor was slippery and some man came over and helped her up!!! I was like, OMW was the man that helped you up CHOCOLATE??? She's like, YES OF COURSE!!! I was like, I AM SOOOOOOOOO BRINGING MY HEELS NEXT TIME!!! Its a GUARANTEED FALL!!!! BAHAHAHAHA!!!
This will be me!!!
﻿ 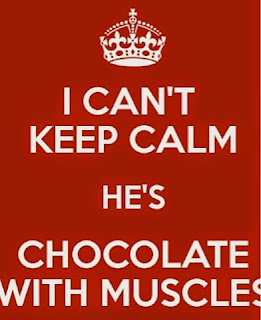 AHAHAHAHAHAHAHAHA!!!
Anywayz, this is a VERY FUNNNNNN place to go on Sundays!!! Good food annnnnnnnnnnd good music!!! Next time Hanna and Anali come we are soooooooooo GOING!!! Annnnnnd anyone else that comes to visit it in AZ!!! Angel and Marissa...PLAN ON IT!!!
LOLO'S HERE WE COME AGAIN!!!!
Go HERE
♥Mary Frances :)
P.S. I still have my black baby doll from when I was four...I don't carry her around ANYMORE THO...now I carry REAL ONES!!!:)
Posted by Mary Frances at 1:15:00 PM