Sooooooo guess WHAAAAAT??! My friends are here from CALI!!! Soooooooo they pull up and I scream and hug them as soon as I see them and the first thing they say is, MARY YOUR A CITY GIRL!!! We didn't even REALIZE that!!! I'm like, YES!!! They are small town chicas...
.
SOOOO then the next thing they say is sooooo HOW WELL DO YOU KNOW YOUR NEIGHBOR on the left??? I'm like, I DON'T!!! They're like, OKAAAAAAy sooooo Angel already had an ANGEL MOMENT!!! Marissa was like laughing SOOOO HARD about it!!
.
Soooooo i'm like okaaaaaaaaaay WHAT HAPPENED!!! So they said that the GPS said,  "your destination is on the left"  and they had stopped in front of a house with a big cactus and Christmas lights.
.
And they see the door kinda crack open and Angel assumes its me, she rolls her window down and Marissa says she trys to stop her but before she could say, I don't think that's Mary, Angel screams out MAAAAAARY!!!! Annnnd the door flings open and a man says real loud, HUH????
.
Annnnd then when she sees its a man Angel just naturally assumes annnnnd is about to yell out STUUUUUULTZ!!! (Because Jonathan is our neighbor across the street at MY MOM's, but I don't live with her any more, I live with my sis a few streets over) But then Angel realizes that its an OLDER man so she's like OH wait that's not Stultz, and Marissa says she was laughing so hard tears were streaming down her face...annnnd THEN they realized I was ONE HOUSE OVER!!!
.
So later on we were telling Stultz our funny story and we're like, we're trying to think of what to call Angels Moments...she's like, they can't just be Classic Angel Moments, cuz that's Mary's, I'm like NO its FIIIIINE, I don't OWN it!!! So then Stultz was like, how about ANGELIC MOMENTS!!! I'm like, OMW THATS SOOOOOOOO PERFECT!!!
.
Soooooooo yeah between
Classic Mary Moments and
Angelic Moments with Angel... 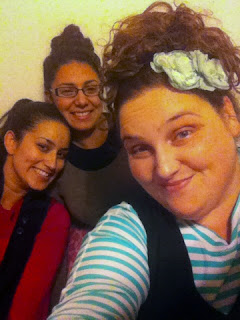 it should be a cRaZy-FUUUUUUN, INTERESTING WEEK!!! Good thing we have Marissa here to keep things HALF WAY UNDER CONTROL!!! BAHAHAHAHA!!!
♥Mary Frances :)
Posted by Mary Frances at 12:48:00 PM