The problem with being ME!!!

Soooooooo the problem with being me is that you make AMAZIN food one day, annnnnnnnnnnnnnd then THE NEXT DAY, you can't even make microwaveable POPCORN RIGHT!!!
.
Okaaaaaay soooo totally FUNNNNNNY STORY!!! The lil boy that I watch, he like, LOOOOOVES AND ADORES POPCORN!!! I mean like you don't even understand how much he LOVES POPCORN!!! He will eat it for BREAKFAST LUNCH AND DINNER if we let him!!! HE LOOOOOVES POPCORN!!!
.
Soooooo another thing that he does is that when he does NOT want something, he will say BYE to it!!! If your putting his shoes on and he doesn't want them, "BYE SHOES!" If his face is dirty and you say, let me clean your face! He'll say, "Bye Face!" If you make him his lunch, if he decides that he would rather play than eat at that time, he'll say bye to whatever you made him! "Bye chicken nuggets!" If he's going with me for the day, but he doesn't feel like it at the moment, he'll say, "BYE MARY!"
.
WEEEEEELLLLL today, his mom sent him some microwaveable popcorn in his lunch, so I was making it for him annnnnnd I DON"T KNOW WHAT HAPPENED, I promise you guys it was ONLY THREE MINUTES, buuuuuuuut the popcorn BURNT!!! Like BIG TIME!!! Like to the point of being NOTHING a ball of ashes!!!
.
Sooooooooo I take it out the microwave and Little Mr. Popcorn loverrrrr takes ONE LOOK AT THE POPCORN AND SAYS...
BYE POPCORN!!! 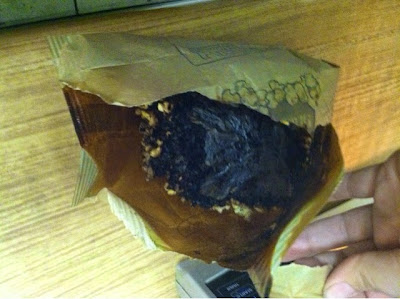 BAHAHAHAHAHAHAHAHA!!! It was soooooo HILARIOUS!!! I just totally busted up laughing!!! He has NEVERRRR said, "Bye POPCORN" before!!! buuuuuuuuut with MY COOKING SKILLS, the IMPOSSIBLE just became POSSIBLE!!! Hee, hee!!!
With MARY,
ANYTHING CAN HAPPEN!!!
♥Mary Frances :)
Posted by Mary Frances at 10:15:00 PM