Today I want to give special honor to an Elderly man in our church, Bro. Earl! I told you all about this man's testimony HERE, however, today I would like to give honor to him for showing us what TRUE LOVE is!!! This man LOVED his wife!!! They were married for 66 years, and for THE LAST 12 YEARS, she has been unconscious, she laid in a bed completely out of it, she had NOTHING to offer him but her breath, people told him to just let her die, but he just couldn't do that! He said he loved her, she was his wife, he made a vow to her...and FOR 12 YEARS HE TOOK CARE OF HER!!! 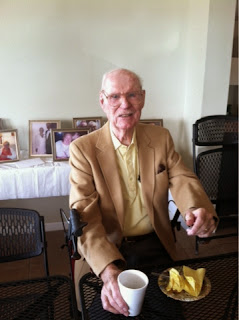 I remember growing up, Elder Abbott would talk to us about LOVE!!! He would always tell us this story that I believe his father would tell them. It was about two lovers. And this young man would go to visit the girl he was courting every Saturday. And when he went to visit her, he would bring flowers and they would sit on the front porch together and he would whisper sweet words of affection to her.
.
One day while he sat their whispering sweet of affections to her, he began to tell her that he loved her so much, he would do ANYTHING for her! He would do ANYTHING to see her sweet face! He would climb the highest mountain, he would cross the driest desert, he would brave the darkest night, he would swim the deepest ocean, JUST TO BE WITH HER!!!
.
Annnnnd OH how the girl swooned with his sweet words. And as the Saturday visit was nearing an end and they were saying their goodbyes, she says, "you'll come to see me again next Saturday, Right?" and the boy says, "Oh yes, OF COURSE...as long as it doesn't rain!" AHAHAHAHA!!! That always cracked me up!!!
.
I remember Bro. Abbott would always tell us, that's NOT LOVE! He would tell us that love isn't just WHEN its convient!!! The boy said he would do ANYTHING to see her, then said he would be there to see her, AS LONG AS it DID NOT RAIN!!!
.
Its so easy for us to say, "I LOVE You!", buuuut its A LOT harder for us to actually DO "I love you!"  The words just slip out in a feeling, I to have been guilty of saying these words without really knowing the meaning of what I was saying! But this man has showed us what it REALLY means to say I love you, not with just his words, but his ACTIONS to his wife!
Denae Abbott wrote a song in honor of Bro. Earl talking about how they spent the best years of their lives together, but her sickness had taken its toll, and she didn't know who he was anymore, yet for 12 years he cared for his bride, and tho she didn't know the difference, he was there by her side, he said, YOU JUST DON'T LEAVE WHAT YOU LOVE!!! The vows that I made are enough, she's STILL MY VERY BEST FRIEND!!!
.
I admit to crying when I hear this song, Bro. Earl has been such an example of TRUE LOVE!!! I want LOVE like this!!! But NOT to just BE LOVED like this, buuuut to be WILLING to love someone like this!!! Thank you Bro. Earl for being an example to this 31-year-old, of what it really means to say I LOVE YOU!!!
.
When you say I LOVE YOU, it means being willing to stay by someone's side at all times... even 12 years-of not knowing who you are, receiving NOTHING IN RETURN...TILL DEATH!!!
That's what it means, to say, "I DO!!!"
♥Mary Frances :)