This is how (PHX) Arizonans roll!!! 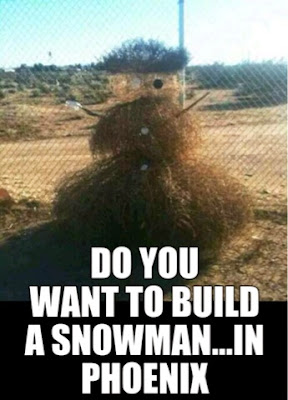 Buuuuuuuuut HEEEEEY, I ain't complainin about it!!! I HAAAATE THE SNOW!!! Its HARD ENOUGH driving, and I LOOOOVE the rain, buuuut I pretty much have mini panic attacks when I know that I'm going to have to DRIVE IN THE RAIN...I DO NOT EVER WANT TO THINK ABOUT DRIVING IN THE SNOW!!!! LORD HAVE MERCY ON ME AND EVERYONE ELSE IN THE WORLD...plus its sooooo cold and slippery... I HATE SNOW!!!
.
ALTHO, I will say that I like tire tubing down the hills annnnnd WHEN the snow is falling all fluttery from the sky and you can ACTUALLY see the little snowflakes....and you catch them on your tongue and they flutter all over you and get caught in your eyelashes...I really think the right guy would fall for me if he could see me with snowflakes on my eyelashes...Lookin up at him all angelic like, and he's lookin down at me with adoration...then I PURRRRR at him... he falls to his knee in a proposal...and then I start LAUGHING AND SNORTING... and we live happily ever after...AWAY FROM THE SNOW...anyway, OTHER THAN THAT I HATE THE SNOW!!! AHAHAHAHAHA!!!
♥Mary Frances :)
Posted by Mary Frances at 7:47:00 PM