Sooooooo tonight, riding in the church van on the way home from church, I had to text one of the mom's to let her know that two of her children had behaved but one of them had hit another kid. So she texted me back and thanked me for letting her know and said that she would talk to her daughter. THEN SHE SAYS...
.
Oh and I have a slice of pie for you and Tommy! I was like, OH WOW!!! Yummmmmmmyyyy!!! That's sooooo thoughtful of you!!! Buuuuuut inside I was immediately travailing in prayer for mine and Tommy's PROTECTION...if you know what I mean!!! AHAHAHAHA!!!!
.
Soooooo we get there and we drop all the kids off and I don't see her anywhere, we're about to pull out and i'm thinking, PHEW, we're SAFE... THEN here she come...RUNNING OUT WITH THE PIE SLICES!!!
.
I hear her telling Tommy its some kind of pie but I can't understand what she is saying but he graciously says thank you and then we pull away!!! As soon as we do i'm like, WHAT kind of pie did she say it was??? He's like, KOOLAIDE PIE!!! I'm like NOOOOO WAAAAAY!!!! REALLY??? My chocolate people made me some KOOLAIDE PIE!!! AHAHAHAHA!!! That's SOOOOOO AWESOME!!!!
.
Annnnnnd NOT ONLY was it KOOLAIDE PIE...my favorite part was that it came WRAPPED IN A...
GROCERY BAG!!!! 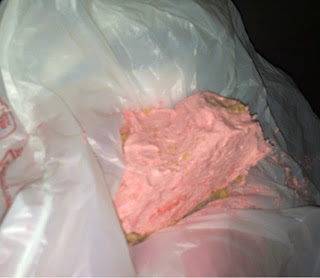 .AHAHAHAHA!!! That my friends is what I call...
GHETTOLICIOUS!!!!
Tommy handed me my wrapped up slice and the two of us were laughing our heads off!!! I'm like OKAAAAAY Tommy, WE GOTTA do this, we gotta be brave, we gotta try this pie!!! Sooooooo we did... annnnnnnnnnnnnnnnnnnnd
surpise, SURPRISE, is was ACTUALLY quite good!!! 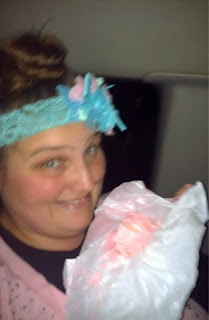 I didn't eat it all because you know, DIET annnnnnnnnd I was still kinda like, ummmmmmm you know, LEERY of it, buuuuuuuuuuut I STILL ate!!! ( I didn't litter and throw it out the window like the cupcake I was given the other day...buuuuut I still dont' see how its littering to throw FOOD, NOT TRASH out the window!!! I call it feeding the starving strays of Phoenix, buuuuuut apparently, I have some goody-goody friends that feel DIFFERENTLY!!! Heh, heh!;) Anwayz, after tasting the pie I think I feel like a missionaries wife or something, Bethany and Allana, you girls should be soooooo PROUD OF ME!!! Eating ethnically authentic foods to THE GHETTO!!! Woot! WOOOOOT!!! HOLLA!!! ;))))
.
Soooooooo I looked it up and the recipe is really easy sooooo I totally have GOT TO make this!!! I think i'm going to try this with the blue flavor annnnnnnd then I thought, OOOOO what about the watermelon flavored koolaide???? With a watermelon oreo cookie crust???? Oh yeah...thatll fo sho get me a chocolate man!!! Hee, hee!!! ;))))
.
Annnnnnnnnd heeeeey if any of you all want to try this recipe out you can find it HERE!!! This recipe is NO BAKE and seriously, its sooooooo EASY I think maybe, EVEN A MAN could make it!!!! Weeeeeeeeeeeeeellllll on second thought, I don't know if its THAT EASY!!!! AHAHAHAHAHA!!!
♥Mary Frances :)
Posted by Mary Frances at 11:30:00 PM