Sooooooooooo last week I was house sitting, for the most part, i'm really NOT a scaredy cat about being by myself, buuuuuuuuuuuut, last week I had a LITTLE INCIDENT with....*Insert dramatic-theatrical-mysterious-music-♪wump, wump,  wump...♪♫♫
THE EVIL LAMPS!!! 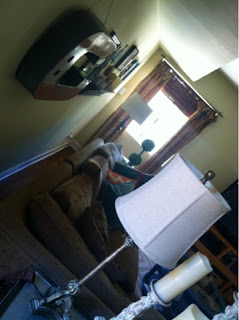 Sooooooooo one day I come home to the house and one of the lamp lights in the living room is ON annnnnnnnnnnnnd I could PROMISE you all that I HAD turned it OFF before I left BUUUUUUUT now it was ON!!! Hmmmmmm...I decided I must have thought wrong and just let it go!!!
.
NEXT NIGHT, THE SAME THING!!! Annnnnnnnnnd this time I KNEW BEYOND A SHADOW OF A DOUBT that that light had NOT been on when I left earlier that day! I had left the dogs outside,
was it possible that cat had knocked into it???? 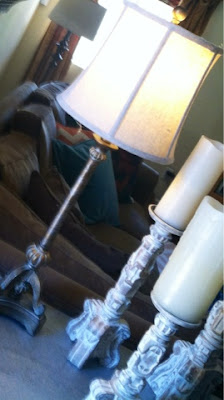 Noooooooooooo I knew what it was!!! This lamp was in the room with the TV and the Twighlight books!!! Those two things are EVIL!!! Yes people, books about vampires open up to spirits, I don't care HOW ROMANTIC you think they are...THEY'RE EVIL!!!
.
I figure I'll spare my big sis from getting scared, cuz she tends to freak out about this kind of stuff...sooooo even tho we had walke in the house together, and I had immediately noticed that the lamp was on I DIDN'T SAY ANYTHING to my sis or ANYONE!!! I just pretended everything was FINE!!! I waited till she was done hanging out with me that night to tell everyone about THE EVIL LAMPS!!! *See how brave I was for you big sis!!!
.
Sooooooo I text some friends, the girls were very sympathetic! Marissa agreed I should have a prayer meeting!!! Hanna called to make sure I was ALIVE!!! Annnnnnd THE GUYS!!! HA!!! They didn't show ANY SYMPATHY AT ALL!!! Stultz ACTUALLY said, LOL, that's WEIRD!! I'm like, ummmmmmm...i'm NOT LAUGHING OUT LOUD RIGHT NOW!!! AHAHAHAHA!!!
.
Weeeeeeeeeeeeeeellllllll... later on i'm just like TRYING TO FIGURE IT OUT IN MY MIND...are they on a sensor or WHAT??? Nope! NO SENSOR!!! I'm just like HOW could the cat turn it on??? Did they leave someone else a key to check on things? One of the neighbors??? But wouldn't they tell me if they had done that???
.
Soooooooooo I'm just staring and staring at the lamp! Staring at the wire! Staring at the plug!!! Hmmmm...that seems like a really big PLUG...hmmmm...hmmmm...OMW...
THEN HIT ME!!!! 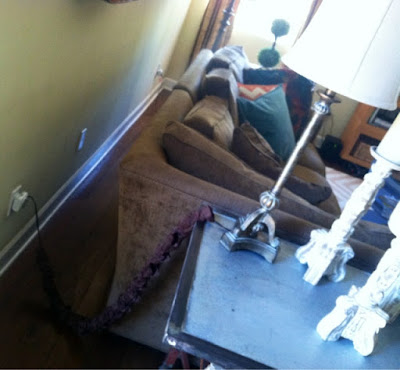 AHAHAHAHHAHAHAHAHAHAHAHAHAHAHAHAHAHAHAHA!!!!! They were set to turn on automatically at a certain time EVERY NIGHT!!! My sister's like, have you told them yet about how it scared you??? I'm like, NOOOOOOOOOO...I'm scared she's gonna be like,
WHAT TIMER?????
AAAAAHHHHH!!!!!!
♥Mary Frances :)
P.S. Timer or no timer, I STILL think those Twilight books are EVIL!!! Don't let them in your house!!!
Posted by Mary Frances at 11:30:00 PM