YOU KNOW ITS GOING TO BE A GREAT NIGHT...
WHEN CHURCH HASN'T EVEN STARTED
ANNNNNNNNNNND YOU'VE
ALREADY BEEN PEED ON!!!
.
True story People, one of these little girls is a CHRONIC pee-er...if that's a word??? LOL I'm suspicious that this is her mother's way of getting her a new wardrobe!!! AHAHAHAHAHA!!! She gets off my lap and there is a wet spot...I'm like, AAAAAAAHHHHHHH...NOW i'm gonna have to WASH MY SKIRT!!! I was hoping for a few MORE wears!!! Heeeeey don't be all judging me for not washing stuff EVERY time I wear them...washing them rapidly wears them out faster!!!
. 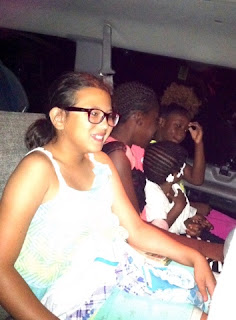 So yesterday, once again BEFORE church, Tommy, Kelsey and I are at the apartments, well one of the boys is sitting in the van like he's going, I know he's usually NOT allowed to go cuz his family is strict Muslim from the Middle East. I just look at him and before I can even say anything he's like, MY DAD SAID I COULD GO!!! I'm like OKAAAAAY then tell him to come out to the balcony of your apartment so I can talk to him...Yeah, I was being lazy, I had ran up like a kajillion flights already!!!
.
Sooooo his dad comes out on to the balcony annnnnd BOY did I ever regret telling him to come out!!! He was wearing his "PJs" which weren't exactly pajamas if you get my jist...LOL I was like, OH LORD have mercy on my poor eyes!!! I actually wanted to take my poor lil eye balls out and comfort them,  rock them in my arms and tell them everything was going to be ALRIGHT!!! BAHAHAHAAHA!!!
.
I'm like looking sideways shouting up, YOUR SON SAID, THAT YOU SAID, THAT HE COULD COME TO CHURCH TONIGHT! Is it ok???" He's like, oh no I didn't...But he has an accent so I can't really understand him...I'm like, You DID? Or you Didn't??? He's like, NO! I'm like okaaaaaay...walking sideways...bahaha...I thought MUSLIM'S BELIEVE IN MODESTY??? What's up with THAT??? Poor eyeballs...let mommy give you a bath!!! AHAHAHAHAHAHAHA!!!
.
Then we had picked up some kids and were going to another apartment and on the way there Tommy is playing music and one of the boys, who is special needs, is like, TOMMY! Can you turn this song off???? I'm like, WHY??? The song is saying, "Grace wins, Grace wins, for the woman at the well, Grace wins! For me Grace wins!!" Etc... I'm like, is it cuz its Saying Grace? He's like, YEAH! I don't like her! And I don't why she keeps winning!!! AHAHAHAHAHA!!!
.
Annnnnnnnnnd this is THE GRAND FINALE story!!! So on most Tuesdays, I go to all the apartments and homes of the kids that come on Wednesdays, bringing them candy, cookies or brownies, to remind them that church is the next evening! I never give a specific time, because SOME PEOPLE, mistake my lovely car, THE HUNK, for a Taxi service.
.
WELLLLLLL ONE OF THE MOM'S, that DOES think i'm a taxi service had been texting me with whatever she needed me to...she ALWAYS says she'll give me gas money buuuuut for some odd reason, I have never actually gotten it from her...anyways, I rejected her last 10;30 PM phone call, due the last late night call which involved me pick her up from Greenway and 25th Ave...she hadn't made the bus annnnnnnnnnd I had ignored her text inviting me to a revival on Sunday from another Christian church that speaks in tongues, that she was invititng me to go with her too...which basically meant she wanted me to give her a ride to ANOTHER CHURCH...UHhhhh not happening sista...you wanna go to a church that speaks in tongues, you can go to MINE...liiiiike.. HEEEEEEEEY!!!
.
Soooooooo this lady is also obsessed with my cookies and brownies, I MEAN like, SHE LOVES THEM!!! She'll do anything for them..LOL  Sooooo texted her to let her know that I would be coming!!! This is my text... 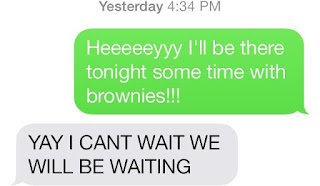 .
Sooooo you read this first one...she's all excited...
.
Here is the NEXT ONE

I'm like, WHAAAAATTT??? LIKE really??? REALLY!??!?!!? I had a lot of things I wanted to say at that moment...buuuuuuuuuut I decided to be a CHRISTIAN!!! I've been learning to LOVE, buuuuuuuuuut to also be FIRM...and this mother has been the best teacher of me learning to do this...ahahahaha!!! Soooooo this was my response...
. 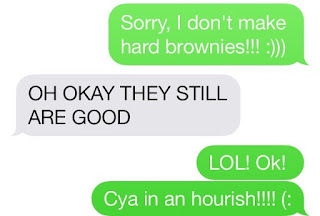 .
Soooooo that was on Tuesday evening!!! Last night after Bible classes, my sis tells me what was happening in the adult class since i'm helping in the kids class. She says that during thee adult teaching she pulls out a baggy of life savers out of her purse to suck on one. When she went to open the life saver it made this little crinkling noise. This SAME woman was sitting in front of my sis and she said that when she heard the crinkling noise she whirled around and said to my sister, ARE THOSE BROWNIES???
.
AHAHAHAHAHAHAHAHAAHAHA!!! I told you she likes MY BROWNIES...even IF they are SOFT!!! My sister was like, uh...noooo...it's a life saver, would you like one? She's like oh yeah, i'll take one!!! My sister was like, I MEAN did she really think I would be breaking out a brownie in the middle of the service??? I'm like, WEEEEEELLLLL I did see her sneaking pieces of FRIED CHICKEN during service one time!!!! AHAHAHA!!! YEAH FO REALZ PEOPLE!!!! I believe it was from Food City!!!!BAHAHAHAHAAHAHAHA!!! If your wondering if she is BIG, the answer is NO!!! Shes pretty small!!!!
.
AnywayZ, whenever I tell my friends stories about her, they always say I have such patience...IDK how to explain it tho...its like I get soooooo annoyed at times....well 95% of the time...LOL.. I think I'm gonna go CRAZY... but then at the end of seeing her, I always give her a hug and say, I love you! And she always hugs me back tightly and says I love you too! And its like, I just see this bigger kid that came from a big, messed up life and is living the same messed up life she came from and when she says I love you back its like I know that I'm probably the only one that says it to her and if I don't put up with her,  If I don't love her, WHO WILL??? And then her kids will just grow up the same way she did and the cycle will just continue...
.
Before I end this post I have two prayer requests...
1. There is a 13-year-old boy from a Muslim family migrated from the Middle East he has been coming to church and last  night WAS his third service, he was lifting his hands and worshipping God! I just want to pray that God would give him a revelation and that he will be filled with the Holy Ghost and baptized in Jesus name!!!
.
2.
There is a group of four kids who's family is also Muslim, they are from Africa and they want to come to church SO BADLY but are not allowed by their father because of their religious beliefs! I want to pray that God would soften their dad's heart and that God would make a way for them to come! Thank You all and GOD BLESS!!!
♥Mary Frances :)