Soooooo imagine my complete and utter surprise when last Sunday I see Hanna walk in to church...I was like, OH MY WORD SHE SURPRISED ME!!! Well after about five minutes of staring from the front of the church, I realized it was NOT Hanna...LOL 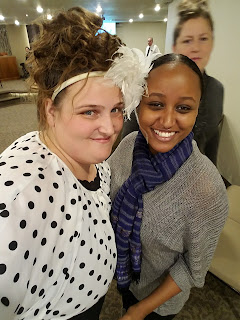 I realized that it must have been the people that I had talked to on the phone that had gotten the flier Sis. Abbott and I had passed out...I was like, OH my word she texted me their names and I could tell they were of another ethnicity but I knew it wasn't Hispanic...annnnd NOW it hit me, THEY WERE ETHIOPIAN!!! They had to be!!! Hanna had always told me that you'll start being able to tell if someone is Ethiopian or not. So at alter call, someone brought her over to me because she was looking for the Mary they had talked to meet, and she was like, Are you Mary? I was like, YES!!! ARE YOU ETHIOPIAN??? She was like, YES! I was like, I KNEW IT!!! MY BEST FRIEND IS ETHIOPIAN!!!! 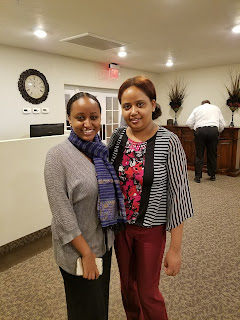 I was like, SOOOOOOOOOOOOOO DO YOU GUYS COOK ETHIOPIAN FOOD????
SCORE!!! They already had me over for a meal last week, I was like, YEEEESSSS!!! LOL I couldn't eat very much of course buuuuut it was sooooo good!!! 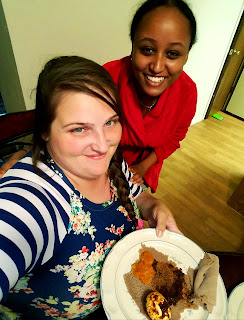 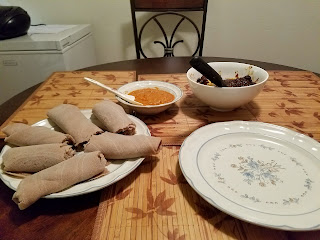 So anyway, this is Betel, but she goes by Betty, she is almost 19 and grew up in Ethiopia till she was 14, she asked me if I could tell, I said the only thing that I can tell she's not so Americanish is her hospitality, Hanna has told me how hospitable Ethiopians are, and of course I've experienced that with Sis. Kifle and such but yeah its definaltely a VERY NICE cultural difference that I saw in her! 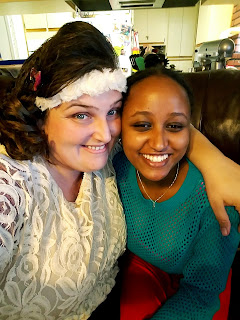 Anywayz, Betty said she is planning on coming to our church now. I'm sure that you'll be getting to meet her soon at our youth rally or something!!! It's really neat how we found her, her apartment was the one apartment we ALMOST didn't put a flier on!!! The location of it is near the office and we weren't sure if it was part of the office or what!!! So she told me that her aunt had been praying that God would give them a church of their own, so when she came home and saw our flier she said she had to call because she had prayed!!! Isn't that cool??? Then when I was going to pick her up I couldn't figure out which apartment was there's and finally I was like, I BET its the apartment we almost didn't leave a flier on...IT WAS!!! I was like, WOW!!!! God is soooooooooooooo GOOOOOOOOOOOOOOOOOOOOOOOOD!!!
♥Mary Frances :)
Posted by Mary Frances at 12:00:00 AM