I, Mary Frances Ginty have a confession to make...
YES, I said a confession!!! (Hope you all can handle this...are you ready???) HERE IT IS:
I am a THIEF!!! Yes, yes, yes, I know this is shocking news everybody...BUUUUUUUUUT I STEAL!!! What do I steal??? Thank you for asking, I would LOOOOOOOOOOOOOVE to tell you all!!!! ;)
.
So last week I went to the county fair with my brother Abe, his wife Grace and their two kids and I brought along with my nephew Odin. Well we're doing the little kiddie rides with all the kiddos for a while, we take a break for lunch buy more tickets and then we're at it again with the kid rides. By this point in the day, it's typical AZ spring weather which means its starting to get pretty warm. All over the fairgrounds they have these HUGE umbrellas on cement blocks to create shade under and around the benches set up as well. However, for whatever reason, the fair staff had not yet opened them, and you needed a special tool to open them, trust me, I had already tried.
.
So my sis-in-law and I are taking turns going on the rides with the kids to try and conserve their tickets, well it was my sis-in-laws turn to ride and while she was doing so, I decided to find a shady place to relax a minute. The only place I could find nearby was one of the umbrellas, though not opened, still had a bit of shade on half of the cement block it was on. Even, though there was a little boy sitting there on half of the shade eating some fries, I figured I would just sit on the other half of the shade. (And NO I didn't steal any of his fries you guys!!! AHAHAHAAAA!!!)
.
I could tell when I sat down, that this boys father didn't like that I was sitting there with them, buuuuuuuuuut, he didn't say anything, and I just went right on sitting there because hey, it was hot and I wanted shade! So then my brother comes over, and he sits on the other bench, we start chit-chatting, I'm all to my brother, Idk why they don't open these umbrellas, it's getting really warm out, seems like now would be a good time to open them. Well we talk about pretty much NOTHING for a few more minutes just going over what rides we're going to take the kids on next...
.
When I hear  a female voice joining the other little boy and father. She says to her son, Mommy's back, Oh wow, it looks like someone STOLE your shade!!! YES, she said STOLE! She then tells him to scoot over she could get some shade too...I was like thinking in my head, are you seriously kidding me??? YOUR GONNA ACCUSE ME OF STEALING SHADE??? I just ignored her and continued to talk to my brother...I was thinking, I didn't pray long enough this morning to respond to SHADE STEALING ACCUSATIONS!!! I mean, I didn't even KNOW you could OWN SHADE!!! AHAHAHAHAAA!!!
.
BUUUUUUUUUUUUUUT....
There you have it guys, 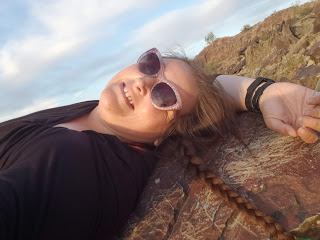 P.S. I also steal rocks on top of mountains to relax after a hike...although I prefer the term borrow!!!
P.P.S Had she SHARED her shade with me, I wouldn't have to steal it...guess her mommy never to taught her to share...MINE sure did!!!
.
P.P.P. S. I feel bad for the man married to her, could you imagine being married to a woman that accuses random innocent folks of stealing shade??? Bet he's living on the corner of his rooftop...ahahahaaaaa!!!
Posted by Mary Frances at 2:27:00 PM