Ghetto TO the NEXT level!!!

Soooooooooooo I'm laughing soooooo hard right now because I was on one of my all time favorite FOODIE sites, DELISH, and they're advertising that Dunkin Donuts now has a WHOLE WEDDING LINE OF CLOTHING!!! No JOKE!!! I'm literally laughing my head off!!!!
This proposal takes GHETTO
to a WHOLE NEW LEVEL!!! 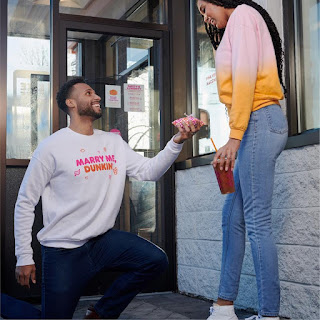 This is pretty much right up there with the person that told me they knew that it was GOD in their love story, cuz her and her new man JUST HAPPENED TO BE ON THE SAME BUS, AT THE SAME TIME!!!! I'm like, YEEEEEEEEP, that just HAS TO BE GOD!!! BAHAHAHAHAAA!!! Maybe that's my problem, I haven't been taking the city bus anywhere!!! AHAHAHAHAAA!!!
Buuuuuuut this is ghetto to THE NEXT LEVEL, this is what I officially call...
GHETTOLICIOUS!!!! ;) 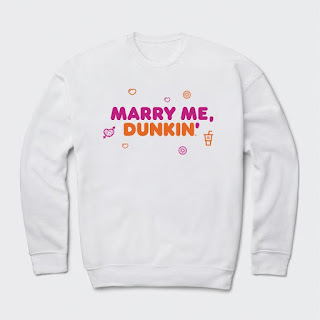 I mean, NOT that I would say NO, IF it was the RIGHT guy proposing to me at DUNKIN's, buuuuuuuuut seriousley, as a foodie,
I have to say that they, Dunkin Donuts and Krispy Kreme are LITERALLY in a contest for THE WORLD'S WORST DONUT!!!!
.
If you live in AZ, you just know that the Bosa chain is the all around best donut place, BUUUUUUUUUUUUUUUT if your gonna propose to me at a donut shop, make it Original Rainbow Donuts off of Bell Rd!!! (This IS a different shop than "Rainbow Donuts" off of Thunderbird and "The Original Rainbow Donuts" off of Cave Creek, this is just "Original Rainbow Donuts" apparently all the owners of these places know each other buuuuut are NOT a franchise, they are ALL owned individually, NOT really to sure WHY they couldn't think of different names buuuuut that ain't none of my business!!! BAHAHAAAA!!!!) Anywayz, Original Rainbow donuts, IF YOU NEED to propose with a donut, that right there is PROPOSAL MATERIAL!!!
.
♥Mary Frances :)
P.S. I think I'm going to go get an Iced Chai Tea From DD!!! AHAHAHAAA!!!
Posted by Mary Frances at 5:00:00 AM