Soooooooooooo if you guys have never heard of Jungle Jam, it’s one of my absolute favorite Kids Radio Show!!! (My mom was against them back in the day because they replaced Ranger Bill! Sooooooooo she called up Focus on The Family and complained, my mom made today’s Karens seem angelic… Bahahahahaaa and she demanded to know WHY they would replace Ranger Bill with Jungle Jam and they explained that they were just trying to have a show for kids that was a little more with the times! Annnnnnnnd MY MOM SAID in that NYC accent, oh what are you guys going to do next to be up with the times, have Michael Jackson singing Amazing Grace?!?
.
Anyways, that was ONE THING I was not in agreement with my mom on!!!! I loooooooooved and still do, JUNGLE JAM!!!
.
And I’ve been getting my nieces and nephews into them now too!!! Well the other day Odin was asking me if Gruffy Bear 🐻 has a wife and I was like yes it’s Muffy Bear! And he was like do they have a kid? So I was like no it’s just them and he’s like I think they do and I’m like no I don’t think so!
.
Well the next day he comes running in my room and he says Aunt Mary, THEY DO HAVE A KID BEAR, they just mentioned him on this episode!!! I was liiiiiike sooooooo excited!!! Awwwwwww they had a BABY I SQUEAL OUT!!
.
My sister who is walking down the hall hears me say this and peeks her head in and says, Who had a baby?!? I’m liiiiiike, GRUFFY AND MUFFY BEAR!!!
.
She just stares at me blankly! I’m liiiiiike YOU KNOW, from Jungle Jam!!! She’s like they’re  bears… and not even real ones!!! She’s just walks away liiiiike and you actually got excited about this???
.
I’m liiiiiike YES BECAUSE GRUFFY BEAR 🐻 and I’m a teddy bear 🧸 and he had a baby annnnnnnd I loooooooove babies and he WROTE BEAR 🐻 🤗 HUG!!! 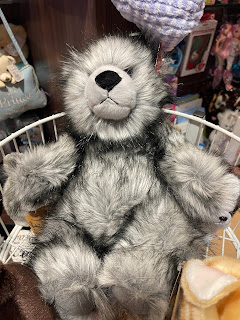 Gruffy Bear is a Daddy ❤️
..
Annnnnnnnnnd you know Bear 🐻 Hug 🤗 is MY SONG!!! Annnnnnnnnnnnd I’m MAR BEAR 🐻!!! Annnnnnnnd I give Mar Bear 🐻 hugs 🤗 annnnnnnnnd sooooooooo that makes Gruffy Bear 🐻 one of my heroes!!! Annnnnnnnnnd probably also one of the reasons I’m NOT MARRIED buuuuuuuuuuut you know what… I’m STILL GONNA BE ME CUZ BEING ME IS FUUUUUNNNN!!! And I’d rather be ME and single than NOT ME and married!!!
.
Annnnnnnd then you hear Odin, I don’t want you to get married anyways Aunt Mary…you can’t leave!!!! Awwwwwww 🤗
.
🎶 Bear 🐻 hug, giiiiiiiive AUNT MARY A BEAR HUG 🤗!!!! It’s a special way of SAAAAAAAAAAYING
I LOOOOOOOOOOVE YOU!!! 🎶
.
♥Mary Frances :)
Posted by Mary Frances at 9:21:00 PM