Sooooooooo we went to Flagstaff AZ this week for a little overnight trip, get outta the heat in mountain air and you gotta understand that in Flagstaff your either superrrrr redneck folk… OR HIPPY from liiiiiike the most liberal part of Cali!!! I mean literally I’ve neverrrrrr seen more barefooted men walking around in my life!!!
.
Well we were on the California part of the city and I told my sister, WOW this literally looks like the Bay Area of California but iN AZ!!! My sister was like, well it IS CALLED the San Francisco district… I was liiiiiike oooooooh!!!
. 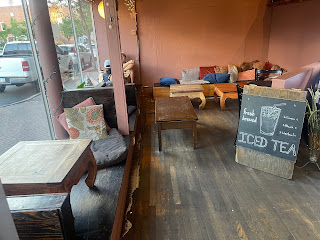 So we went to this really unique tea shop called Steep. It was kinda cute buuuuuuut more hipster with kinda an Indian vibe… like India the country…. It had this kinda sit on the floor or cubicle with pillows and low tables the of set up… really hipster…as I said… 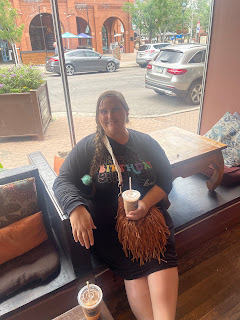 .
Weeeeeeeeeeeeellllll I snuck a picture of this man who had kinda like the homeless look going on, buuuuuuut I’m pretty sure that was the look he was going for buuuuuuuut was probably really actually RICH 🤑 HAHA 😆 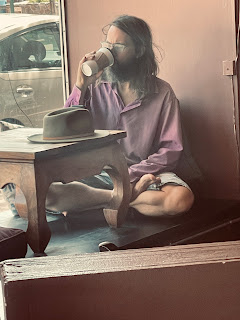 I mean, check him out…this bro has the hipsterrrrrr look 👀 down to the T… literally… THE TEA 🍵 BAHAHAHAHAAA
.
Now CHECK ME OUT…
This is ME trying to be HIPSTER!!!
Bahahahahahahahahahahahahahahaaaa!!!!!
I have no idea how that Bro managed to sit like that and seemed to be getting a lot of work done on his laptop 💻 as well!!!! He was A LOT shorter than me when he got up though so I suppose that helped!!! Not gonna lie, I was impressed with his weirdness!!!😂😇
♥Mary Frances :)
Posted by Mary Frances at 4:13:00 PM