From the other side... 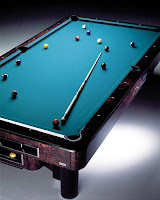 The other day I went to my friend Travis's birthday party. Some how I got talked into playing a game of pool. The team was me and my friend Liz and our components were my pastor's wife, Sis. Abbott and Sarah Abbott, one of my friends as well. So we start playing and we are BAD!!! I mean NONE of us were good...AT ALL!!! At first
everyone was watching us and laughing, but after a while everyone started filing outside for a game of tag football. We had gotten two balls in the holes and that was IT!!! We had been playing for about 45 minutes already and the game was just dragging ON and on and on!!! It was so bad my teamate Liz and I were actually TRYING to get the 8-ball in so that we could JUST LOSE and the game would be OVER!!!
.
Meanwhile, my pastor was sitting on the couch, looking at pictures on his digital camera, every once in a while, he would glance up and just kinda look at us all TRYING to play. Finally after about an hour of this PATHETIC game, my pastor got up and started giving his wife pointers. You could tell at first that she didn't really like hearing it from her husband, but as she started getting the balls in the holes, the more she wanted his help. THen gradually, my pastor started giving us ALL pointers. Slowley the game began to progress.
.
As we were playing, our pastor would show us how to hold the stick, where to place it on the stick and how hard to hit the ball. Sometimes it would seem like we had the ball perfectley aimed for the hole and we would be about to hit and my pastor would be like, wait, wait, WAIT!!! It looks like your aim is really good from over here, but let me see how it looks from over there. So he would go to the other side of the table, to whatever hole we were aiming for and he would look and see if our ball was aimed in the right direction. If it was right he would say okay go for it! But if it was off he would just be like, okay your aiming over here, move it over a little this way, No thats to far, go back this way...
.
What amazed me was how off our aim really was sometimes. How it could seem SOOOO perfect from our veiw point, but when you stood on THE OTHER side, you could see a better veiw and the reality was that we were waaaay off. However, we couldn't try and hit the ball AND see from the other side. We just had to listen, to the directions coming from the other side of the pool table.

So it is in LIFE!!!
Somtimes, it seems that we got it all right. Everything seems just oh so perfect. You got everything all lined up and all worked out. Then something happens. You have to get corrected and redirected. For me personally this happened several years ago. But God had a different plan for me. It didn't make any sense to me, but it did to God, because HE was on the OTHER SIDE of my life. (This is my story) Sometimes we feel like life just doesn't make any sense, but we gotta keep trusting God, because we can only see from our veiwpoint, BUT God can see each and every little curve and angle.
For now we see through a glass, darkly...
.... but then face to face: now I know in part...
but then shall I know even as also I am known.
1Corinthians 13:12
Posted by Mary Frances at 12:00:00 AM