Oh course I would... 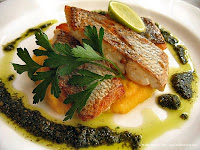 Okaaaaaaay so i've NEVER liked fish or ANY kind of seafood. When I was a little girl my mom would cook it and MAKE me eat it! I would like gag, hold my nose and force little pieces down. It was a VERY dramatic process and my mom finally gave up trying to get me to like it!!!! Well, I was reading in this book called, Picture Perfect Diet, that you should really try to like NEW things. Even those things that you have never like before. Broaden your horizons and TRY to like them little by little. Well since fish is like THE HEALTHIEST thing for you, according to my doctor, I decided to TRY shrimp at Red Lobster. So i did and I actually, really kinda liked it. Okay, like, yeah it was the coconut shrimp and I covered them in the pineapple sauce stuff... but still...I ate FISH!!! So I start little by little eating shrimp and tryin to eat it healthy like. Soooooooooooooo I come to find out that...
Shrimp is the most UNhealthy seafood!
The Highest in cholesterol!
I 'm like what?!?! How can this be?!
I was TRYIN sooooo  hard!
OF COURSE, I would have to PICK the unhealthy stuff!!!
GRRRRRRRRRRRRRRRRRRRRRRRRRRRRRRRRRR!!!!!