Do guys hate ruffles on girls?

That is the question that we all have been pondering, since THIS (Click on THIS to read the post)post several weeks ago. So for about 20 days guys have had the opportunity to vote on weather or not they like ruffles on girls. Now I personally LOVE ruffles...however, I do agree with the guys, that to SOME degree it can get a little out of hand...and girls just look DUMB...but then again, I also think it depends on the girl thats wearing it...cause I have friends that look ADORABLE in stuff that would make me look like shamu dressed as a clown...LOL! Basically, LOOK in the mirror AND if you like what you see, then WEAR IT GIRL! (I would say ask the oppinon of a family member...BUT, if I did that I would ONLY have ONE shirt, a blue plaid one that my brother actually aproves of, so I'm just like WHATEVER!!!) 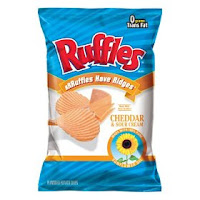 HAHA!! Me and Denae EVEN got Bishop Abbott's vote on the matter!!! LOL Denae said she asked her dad that Sunday morning if he liked ruffles on girls? She said that he was like, "I don't know!" and just kinda looked at her with a funny look! HAHAHAHAHA!!! I was laughing SOOOO hard when she told me this! So we put his vote in the, "Don't Care!" section. LOLOLOLOL!!!
.
I think I wanna marry a guy that "Don't Care!" to be honest!!! It seems kind of wierd to think of a guy as ACTUALLY liking them...BUT at the same time, its ANNOYIN if they just HATE em!!!
I mean, I don't HAVE to have ruffles, but I also don't wanna, NOT have them either! LOL!!!!
.
A new question and poll for, "THE GUYS" will be posted on Sunday!
If "THE GUYS" have any random questions for, "THE GIRL'S...
email me at Maryfranceswriting.blogspot.com or leave a comment
and if you wanna be anonymous...just click on the anonymous section!
Posted by Mary Frances at 12:00:00 AM