Why don't guys want to catch the garter?!?!

GUY QUESTION OF THE MONTH!
What is it about guys these days, that they like FREAK OUT about catching the garter?!?!
Last year, I went to my friends wedding and ALL of us girls were like FIGHTING to get the bouquet!!!
And of course, MUCH to my DISAPOINTMENT, I didn't catch it... as usual!!! Ugh! I just WANNA CATCH IT LIKE ONE TIME!!!!
.

Meanwhile, it was the guys turn to catch the garter...so the groom...gathers all the RELUCTANT single guys together and SHOOTS off the garter, flying through the air...I watch from across the way as it flys and lands RIGHT at their feet!!!! AND what do they all do?!?!? NOTHING!!! NOTHING!!! NOTHING!!! They just STAND THERE, staring at it like....why would I want to catch it?!?! I'm like come on...what happened to the MANLY fights over that thing?!?!? Sooooo you know what I DID?!?! Oh yes, thats RIGHT!!! I go flying across the way...over to the guys and SNATCH IT UP!!! They didn't even care...they're all laughin and stuff..I'm like you know what...THIS IS THE CLOSEST chance I GOT!!! LOL! 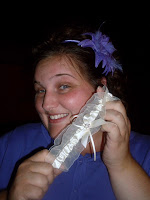 .
So this SAME thing has happened at ALL the Apostolic weddings I have been to this year. THE guys don't want to catch the garter! AND I thought it was JUST an Apostolic guy thing, but I was at a cRaZy weddin several weeks ago, helpin my bro and his wife for their photgraphy and THE SAME THING HAPPENED...all the guys...reluctantly went to the dance floor...and they ALL just stared at the garter...lettin some little punk boy pick it up??!?! WHAT'S up with that guys?!?! I've been to weddins before where guys were ready to KILL each other for that thing! WHATS HAPPENED TO THAT?!?!
.
SOOOOOOO the question of the month is...
Why don't guys wanna catch the garter?
*Not ready for marriage!!!!
*Don't wanna touch that NASTY thing!!!!
*Embarrassed!!!
*Scared about what girl is gonna catch the bouquet!!!
*I would try and catch SOMETHING, if it wern't a garter!!!!
*I don't know what your talkin about...I ALWAYS try!
*I'm to busy eatin cake to care!!!
. 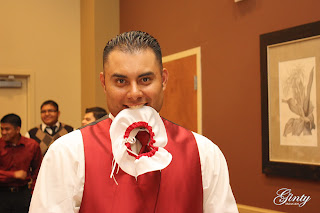