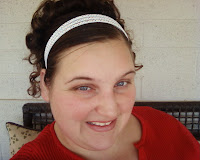 I'm the kind of girl that if Brad Pitt knocked on my door, I honestly wouldn't know the difference between him AND any other sales person trying to sell me stuff or the JW's trying to give me a Watchtower magazine. I HONESTLY don't know what the dude looks like!!!

Everyone's always like, Oh COME ON Mary, how can you NOT know who Brad Pitt is??? I remember one time I was informing a buncha people that I don't know who Brad Pitt is and everyone was like WHAT?!?! Really Mary? Like really? You don't know WHO BRAD PITT IS? And I was kinda starting to feel kind of dumb about it...HOW can you NOT know who Brad Pitt is??? EVERYONE knows who Brad Pitt is!!! Then, all of the sudden, I heard ANOTHER voice speak up... "Well I don't know who Brad Pitt is!" It was Bishop Abbott's wife, Sis. Abbott...At that moment in time, I FELT SOOOO COOL! Me and Bishop Abbott's wife didn't know who Brad Pitt was...I felt like THE COOLEST GIRL IN THE WHOLE WORLD!
I remember this one time when I was in highschool! I had this HUGE crush on some movie star!!! I thought he was sooooo cute...blah, blah, blah...then one day one of my brothers were like Heeey Mary did you hear about him? I'm like no what about him???!?!?! They were like, oh yeah he came out and he is bi-sexual! I was like WHAT?!?!?! NO WAAAAY!!! And I looked it up and SURE ENOUGH HE WAS!!! I was like EWWWW!!! I decided after that, that NEVER again would I chase after worldy guys and movie stars!!!

Seriousley, what's the big whoop, about some guy that doesn't even have the Holy Ghost??? Give me a Jesus name, born again, Holy Ghost filled, One God, Apostolic, tongue talking, holy rolling, Godly young man ANY day over Brad Pitt!!!
HOW do I NOT know who Brad Pitt is???
I don't know, I guess maybe it's just because...
I REALLY DON'T CARE!!!
Posted by Mary Frances at 12:00:00 AM