This was put up for Romo by HIS request!!! LOL! 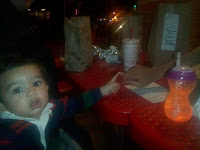 We met Romo last night at the Five Guys in Tempe by ASU and at first Jose REFUSED to be friends with Romo!!! He wouldn't EVEN look at him. When Romo would talk to him he would would just stare straight ahead. My brother's kept tryin and tryin to get him to like him and he would NOT!!! So then we are eating our burgers...Which btw- that places burgers ROCK...so we are eatin and Romo starts just holdin out one finger to Jose...and FINALLY Jose held up his finger back!!! It was SOOOO CUTE!!! 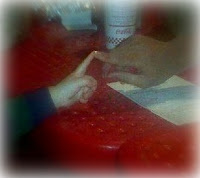 So then Jewel got this picture on my camera and when Romo saw it he was like...
OH yeah!!! BROWN AND WHITE!!! LOL It was pretty funny! Then after that they were total buds and Jose accepted him!!! LOL
AND Romo seems to think THAT....
THIS blog post is gonna be bringing in like TONS of traffic to my blog!!!
HA!!! I'm sooooo SURE!! ;)
Posted by Mary Frances at 4:16:00 PM