This past month of October marked a HUGE milestone in my life!!! Ever since I was 13 years old it has been my ultimate desire to be used by God. When I was 13 I started singing the song at church, "IF you can use anything Lord, you can use me" and that song basically became my theme song in life...To be used by God. One day I'm going to write up a whole article about how it all unfolded, but for right now, I just wanna say that it was five years ago in October that I felt like God REALLY began to use me...It was when God led me to the African people.
I remember sitting in a journalism meeting for the college news paper at Paradise Valley Community college. I had so much on my mind. In the middle of crisis, bombarded with an overload of classes to keep my mind occupied, poor grades and there I sat, Inspirational Editor of the Puma Press/Lynx and NOT feeling the LEAST bit inspired. Our instructor started talking to us about what we were going to do to help out come the holiday season. Normally, each club at the college would adopt a family for the holidays and bring them food and presents. My teacher thought that it would be nice if we did something different this year. She knew about an African Refugee community located in the Palomino Square area of Phoenix. She thought that it would be nice if we went and did a Christmas party there... the students in my class just stared at her....she said that these African kids were sooo sweet...they would run over and give you hugs...the student's continued their blank stares...This was THE SQUARE... THE GHETTO... NO ONE WAS interested in volunteering over there...EXCEPT ME!!! I WANTED to meet these kids!!!
I remember going to prayer meeting at my church that week and I told my pastor, who was Bishop Abbott at that time, I was like there are these African kids...blah, blah, blah...I think they would come to church!!! And Bro. Abbott was just like, "well, it sounds good to me, bring em!" I was just like uh, okaaaaaaaay...like that was NOT the response I was expecting...I mean, I remember I had been HOPING that he would help me figure out a way to get them to church!!! BUT HE DIDN'T!!! I was like, uh ok!!! But I was thinking.... HOW in the world am I going to get all these kids to church?!?! We did NOT have a church van at the time or NOTHING!!! I remember thinking...HOW CAN I BRING THEM???? i'm just like a single girl, without a vehicle...in fact... I DON'T EVEN HAVE A LISCENSE!!!! But you know... when you have a desire to do something for God...HE MAKES A WAY!!!
For five years now, those kids have been coming to our church. Many have been filled with the Holy Ghost and baptized in Jesus name. Some have made commitments and turned away from God...BUT still the truth has been placed into their hearts!!! I talked to a girl tonight, who's not living right..OH but let me tell you something...SHE KNOWS what is!!!! Soooo much has happened in the past five years!!! I remember the first time the Holy Ghost fell on these kids, it was in  Janelle's Wednesday night Bible class and I was her helper, it was THE MOST AMAZING experience!!! I could tell you story after story after story about these kids...make you laugh AND cry!!!
I still remember thinking, How can I do this??? HOW can I bring these kids to church???  I'm just a single girl, without a car or a liscense??? WELL they've been coming for FIVE years now, and I gotta say, NOT MUCH as changed for me...HAHAHAHAHA!!! Although I do got a liscense, I STILL DON'T have a car, and I am for sure still SINGLE!!! BUT I guess those aren't really requirements for God to use you...BECAUSE...God has made a way!!!!
BUT one thing I really want to tell you all, is that in the past FIVE YEARS, I have NEVER ONCE, driven a vehicle over to pick up these kids!!! It has ALWAYS been other people!!! Of course, I have always gone with people and helped them, BUT it has NEVER been me that has driven over to that apartment complex!!! I wanna say a special thanks to ALL the people at my church that helped me with these kids!!! My big sis Theresa, Jacqui, My mom, my brothers, Joe, John, Abe, Sam and Janelle, Jonathon Wickline, Sis. Susan!!! Thank you Bishop Abbott for donating your mini van at one point to pick them up!!! THANK YOU LPC for getting a church van!!!! You guys will never know how much it means to me that you have all picked up the burden!!! I know that God gave me this burden and desire...BUT it is you all that have made it become a reality!!!
Sometimes, we bring these little kids to church and we may think, IS there REALLY a point in bringing a 2-year-old to church??? BUT two year olds GROW UP!!! I remember at Sis. Combs funeral, Bro. Jeremy Eaton, youth pastor of the church in Casa Grande, got up and said that growing up, he was JUST a Sunday School kid. He got picked up on the bus and sometimes he wouldn't want to come, BUT Sis. Combs just kept after him!!! That stuck out to me SOOOO much!!! We can't give up!!! We just don't know what God is going to do!!! I have a dream and a desire and i'm just waiting on God... I KNOW HE HAS A PLAN!!! 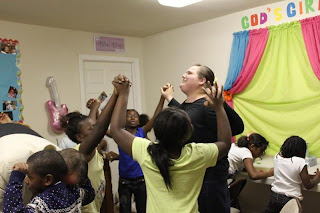