Well...i'm NOT a very political person...thats just the way I am!!! AND everyone ALWAYS says, well if you don't vote YOU can't complain about what's going on...and I gotta say, WHEN have you guys EVER heard me complain about politics??? i usually don't even know ENOUGH to complain about anything going on...usually I find out whats going on by listening to OTHERS complain...LOL!!! (Mac and Gaydos!!! HAHA) I'm just like okaaay mom, who's PRO LIFE and AGAINST GAY MARRIAGE??? K, thanks!!! Thats who i'll vote for!!! I'm not Republican or Democrat, I'm registered as INDEPENDENT!!! I did NOT vote for Obama!!!!!!!!! BUT I also didn't think that Sarah Palin was MS. Wonderful either...however I still voted for that party because their world view was the closest to mine...HOWEVER..I personally thought that as a CHRISTIAN, following the BIBLE, it would be a little DIFFICULT, as Vice President of the United States, for Sarah Palin to be SUBMISSIVE and obedient to her OWN husband!!! AND I personally thought that she also should have found it MORE important, to STAY HOME (Her husband had a GOOD job as an engineer)with her children, ESPECIALLY her baby with special needs, than to be vice president of this country...I KNOW I stand ALONE with this off the wall point of view...BUT...Do YOU KNOW how many times I have taken College of Apostolice Ministries, LADIES OF LEGACY CLASS??? HAHAHAHAHA!!!
Its IN ME BABY!!! 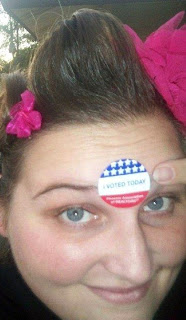 With all that being said...YES...I did VOTE!!! LOL! I know that it is a right, especially as a woman to be able to do this!!! I HONESTLY had NO idea that this was a BIG election!!! So I walked around the rest of the day with this sticker on my forhead AND I got soooo many compliments ON IT!!! Bahahahahaha!!! We were shopping at Frys and people were like complimenting me left and right...It was FUNNY!!! My sis was like, OKAAAAY...how do you manage to get compliments on stuff like that?!?! I'm like, OH yeah, thats me, ROCKIN a sticker in the middle of my head!!! Actually, my real reason for wearing it there is because I was hoping to kill two birds with one stone...
1. Let everyone know I had done my duty!!!
2. Get rid of my unibrow!!! HAHAHA!!!
(Heeey its FREE and I know Dave Ramsey would be proud of me!!! ;) ;) ;)
Posted by Mary Frances at 12:00:00 AM