Is this person YOUR HERO?!?! I know that there are a lot Christians that are following and looking up to this person...WATCH OUT who you follow!!! I got a link to this from a forward and thought I would share it with you all.... 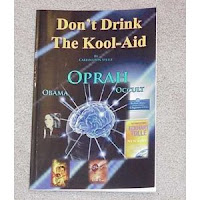 (I'm laughing REALLY hard about the title of this book!!!)
Many people think that Oprah Winfrey is an AMAZING PERSON!!! SHE is NOT and what she is teaching is FULL Of LIES!!! Christians, ESPECIALLY APOSTOLICS, should NOT be allowing her into their homes. For a while I had fallen into thinkin that she was sooooooo WONDERFUL too!! I remember when I first started workin with the African people I would think, if only Oprah could find out about these people, I bet she could help them out SOOOOO much!
And the more and more I was working with the African people, the more and more I started seeing how bound they were by sin. There was and still is soooo much filth going on with them. It just broke my heart and I remember talking to someone (not in church) one time about the stuff that goes on. And this worldy person was just SHOCKED and they were like, you know, THIS IS SOMETHING that Oprah could help them with. She could expose it and educate them and all this stuff...and you know what...I got to thinkin about it and I was like, WHO IS OPRAH WINFREY, that she could help them??? She has herself a live in boyfriend anyways ...SIN IS SIN...no matter HOW sophisticated and classy you try to make it apear. She could educate them on birth control, abortions, safe sex, etc, etc... she could help them become REAL, GOOOOD SINNERS...BUT when it comes down to the nitty gritty, she IS livin IN SIN, JUST LIKE THEM!!! But then again...Oprah believes that, THERE IS NO SIN!!! Bahaha...a very CONVIENENT belief!!! What people NEED to be educated on is REPENTENCE!!! ACTS 2:38!!! That is what makes the difference!!! The BLOOD of Jesus APPLIED to your life!!! "If my people, which are called by my name, shall humble themselves, and pray, and seek my face, and turn from their wicked ways; then will I hear from heaven, and will forgive their sin, and will heal their land."  Repentence! Repentence! Repentence!!! REPENTENCE!!!!
Furthermore, Oprah openly denies Christ and CLAIMS that there is MILLIONS of ways to God!!! She is WRONG!!!  If I believed there were OTHER ways, WHY in the world would I CHOOSE to live the way that I do?!?!?! If EVERYONE'S way is right, then how can you say that what happend on 911 is WRONG??? Those people believed their way was right...THAT IS WHY THEY DID IT!!! The Bible says in Proverbs 16:25 that, "There is a way that seemeth right unto a man, but the end thereof are the ways of death." What really ticks at me is the fact that she USES GOD's word, that she denies, to try and endorse what she believes, plus she contradicts herself. She says that God is not a belief, but that he is, that he is a FEELING, and that that is what SHE BELIEVES!!! Ummm...yeah i may be a college drop out BUT, i'm pretty sure thats a BELIEF!!!  Well, you know what, its true, GOD IS and He IS no matter WHAT she believes OR doesn't believe!!! John 14:6 says,  "Jesus saith unto him, I am the way, the truth, and the life: no man cometh unto the Father, but by me."   Matthew 7:13-14 "Enter ye in at the strait gate: for wide is the gate, and broad is the way, that leadeth to destruction, and many there be which go in thereat: Because strait is the gate, and narrow is the way, which leadeth unto life, and few there be that find it."
I really just want to encourage people NOT to make worldy figures our heroes or people we look up too!!! Even Christians outside of what we believe should ALWAYS  come SECOND to One-God-Apostolic-Pentecostals!  All these quotes by Rick Warren and Sarah Palin ... get some quotes by people like, Bro. Morton, Bro. Ikerd, Sis. Ikerd, Bishop Abbott!!! Man, do you know how many AWESOME things Sis. Abbott has taught me all my life...Oprah Winfrey, Princess Dianna AND Sarah Palin are NOTHING compared to her!!! Weeellllllll I could say A LOT more but I'll wait...next week...LOL!
SOMEBODY...get me a microphone!!!
HAHAHA! J/K!!! ;)
Posted by Mary Frances at 10:28:00 AM