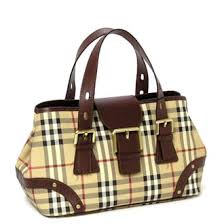 Sooooooo I totally think that Burberry is UGLY!!! LOL! Its just my personal, humble little oppinion...that hmmm...might have something to do with the ABSOLUTELY RIDICULOUS price of them...but Idk...I really DO think they are ugly!!!!

The first time I saw a Burberry winter scarf on one of my friends, I thought in my head, WHAT IN THE WORLD is she wearing that OLD LADY SCARF for?!?! Then I found out later on, its BURBERRY!!!! (Big whoopity-do-da!!!! I don't care WHAT the brand is..If its ugly, its UGLY!) Which I had NO IDEA at the time what it was SOOOOOOO I looked into and was like...WOW...soooo people pay ALL THIS money for ugly stuff...WOW!!!

AND i'm seriousley convinced that people don't REALLY even think these purses are cute, they just talk themselves INTO it cuz of the BIG BRAND NAME!!!
WELLL...I FINALLY met the first person EVER to REALLLLY like Burberry for ITS LOOKS and NOT ITS NAME!!! That person would be NONE other than my one and only KIMMY KAT!!! LOL!!! Now if you know ANYTHING about Kim you have to know that she is NOT the type girl to be toting around a BURBERRY!!! Soooo you just have to know that KIM absolutley loves and adores anything that is PLAID!!! She just loves PLAID
Soooo the other day me and Kim are sitting in her car getting ready to park and she is like, OMW MARY!!!! That is like THE CUTEST PURSE EVER!!!! Soooo I look up and I'm like WHERE??? She is like RIGHT THERE!!! That plaid one!!! i look over and see this chick with a Burberry over her arm...I'm like KIM!!!!!! Thats a BURBERRY!!! She is like, What's that?!?! I'm like, its a REALLY, REALLY, REALLY expensive brand. She is like, oh like $100 for that purse or something?! I'm like NOOOO!!! Probabley AT LEAST  $600 for that purse!!!
Kim is like, WHAT?!?! SHUT YOUR BEAK!!! (Thats one of Kim's famous line in life!) I'm like yup!!! Still think its, "SOOOO CUTE?!?!" She is like YES..but...!!! LOL I'm like, Lets put it this way, if I ever have a Burberry purse I'll give it to you, cuz you are THE ONLY person I know that truley likes Burberry for its (UGLY) looks and NOT its name!!! But THEN AGAIN on second thought, I know that if you or I EVER did actually have that expensive of a purse me and you BOTH would sooooooooo be tradin it in for the cash!!!
Kim was just like Okaaaaay thats totally TRUE!!! LOL!!! We're both kindred spirtits when it comes to
GHETTOLICIOUSNESS!!! :)))