I present to you all ...Dunt...dunt...DUUUUU
THE CASE OF THE DRAWN ON ARMS 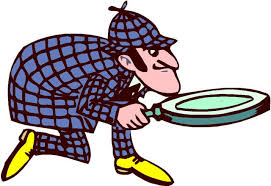 .
I walked into Cesar's room when he was takin a nap AND this is what I saw!!! (Yes its PERMANENT MARKER!!! No I didn't spank him, I was just thankin God it wasn't on the walls!!!)

Sooo when Mommy (Kim) came home I showed her and I said, "HORSEY DID IT?!?!??!" She is like, Oh really? Is that right Cesar? He said, yes HORSEY did it!!! So Kim is like, OH what a BAD HORSEY!!! He needs to be punished!!! We should throw him in the street and run him over!!! I'm like YEAH!!! Lets do it Kim!!! CESAR says, NO MOMMY! Don't do that to Horsey!!! We say but Cesar, HE IS BAD!!! He says, NO Horsey didn't do it!!!
OH REALLY!!! Then WHO did it??? He says, ABRAHAM did it!!! I say, Abraham? He says YES! I say as in Uncle Abraham? He says YES! I say soooo my brother, who lives in another house and sleeps during the day cuz he works overnight, came into your room and drew all over your arm!??? He says yeah, the giant one that reaches the sky!!! (Yup thats Abe) I'm like, yeah, thats MY brother!!! He is like, is that the one that is putting up our trampoline? I'm like, No thats Uncle John! He says, oh yeah, It was Uncle ABRAHAM then!!!
Well then Uncle Abraham needs to be punished, we will have to call Grandma Bear(thats what he calls my mom) to punish Uncle Abraham!!! He says, OH NO!!! It wasn't him...it was a monster!!! And you wern't scared of the monster? ummm NO...
Soooo a monster wrote all over your arm?!?! Actually it was the MIRROR!!! That mirror RIGHT there!!! He points to the one in the entryway of our house. I'm like OKAAAAY soooo your telling me that the mirror GOT OFF THE WALL && walked DOWN the hallway, to your room and wrote ALL OVER YOUR ARM?!?!
He lowers his voice and whispers...No, no, it tiptoed down the hall!!!
(RFLOL)
Sooooooooo all of our suspects thus far are, HORSEY, Uncle Abraham, a monster and the entryway mirror... I just wannna invite ALL OF YOU to take a guess...
WHO DO YOU THINK WROTE ALL OVER CESAR'S ARM?!?! 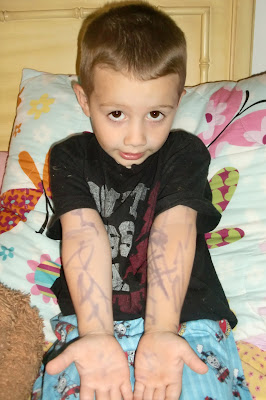 Can you think of ANY other SUSPECTS involved in this case???
Posted by Mary Frances at 6:25:00 PM