Compliments on my eybrows...

I was tellin my sister that the lady that did my eyebrow this last time did SUCH A GOOD JOB!!! I'm all like, I have just gotten SOOOOO ooo MANY compliments on them this time!!! My sis was like, Oh really? A lot of people have been saying stuff? I'm all like OH YEAH!!! And my sis is like Oh who all has noticed them and I was like thinking about it like, hmmmm, NOW who ALL has told me that they liked my eyebrows???
And as I thought of it, ONLY like three people came to my mind!!! I was like, hmmm...who? Who else? WHO? WHO? WHO??? AND the more and more I thought about it, I realized WHO ALL THE OTHER PEOPLE WERE!!!! 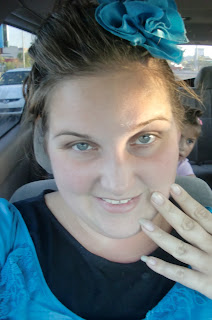 ...ME!!!
BAHAHAHAHA!!! LOL! I realized that EVERY TIME one person had given me a compliment, I had given MYSELF at least FIVE MORE COMPLIMENTS!!!  Thus addin up to A TON OF COMPLIMENTS!!! HAHAHA!!!Okaaaaay BUT I really do like them though...EVEN if ONLY three other people aside from myself, ACTUALLY THOUGHT they looked good!!! ;)
♥Mary Frances :)
Posted by Mary Frances at 12:00:00 AM