This past Sunday had to be one of the MOST MEMORABLE Thanksgiving feasts EVERRRR for me!!! Lets just say that the outreach has picked up like BIG time and we got a whole church van and my sis's mini van FULL of kids...it was soooooooo AWESOME!!! BUT it made for a WILD ride!!!
.
Lets just say that it began with someone "letting loose" in the church van and it smelled SOOOOO bad that another kid threw up!!! I was like OMW...aaaaauuuggggghhhh!!! LOL And like everyone was screamin and I had to break out my Victoria Secret body spray and like the boy that "let loose" was all like DEFENDIN himself!!! He is all like, YOU know that EVERYONE boofas...boofa is the African word for "lettin loose"  he is all , it was just a boofa...i'm like UH yeah...one that caused another kid to THROW UP!!! Like WOW!!!
.

AND then when we all get into church and all the kids are tryin to figure out WHERE they gonna sit, like NONE of the other kids wanted to sit with the boy that had boofa'd or with the boy that had thrown up...BUT also the boy that had boofa'd and the boy that had thrown refused to sit by each other either...like fo realZ?!?!
.
But it was such an awesome service and the kids were worshipping and there was a new girl and she wants me to invite her parent's because she thinks they will come to church if they have a ride and THEN there is a Hispanic girl that wants to go soooo badly but she is waitin for the like ONLY Spanish speakin lady in our church to come and talk to her mom...soooo its cool cuz its spreadin in the neighborhood from one apartment complex to the next couple of streets down... 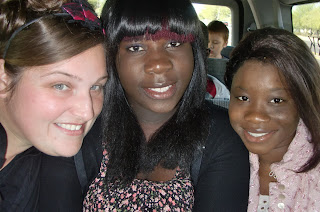 OH and then there are these Muslim kids from Iran, that for 6 years we have ASKED and ASKED and ASKED if they could come and their father would ALWAYS say NO...because they are like SUper strict Muslim...BUT he is FINALLY startin to let them go!!! The first time was for our Holy Ghost part at the end of October...He was just like, welll we're not Christian...i'm like thats OK!!! And he is like weeelll ok!!! And i'm like oh do you want my number and he is like, Oh no! I know who you are and I know that if they are with you they are safe!!! I'm like sweeeeeeet!!! And it was soooo awesome...holdin that lil Muslim girl on Sunday and she was RAISING her hand worshipping...JESUS!!!
.
AnywayZ, our day ended when the glass table SHATTERED in the kitchen of our church...from YES one of the kids...I was ACTUALLY surprised that it wasn't ME that broke it!!! AHAHA!!! ANywayz, when I heard the shatterin I KNEW it was time to head home!!! LOL oh but I guess thats NOT really the end of the day...it ACTUALLY ENDED with...
.
This one African boy was teasin like THE ONLY WHITE girl about likin another one of the boys and she like started hysterically crying...and everyone was like...stop cryin...stop actin like your WHITE and she is like BUT I AM!!! Ahaha...SOOOO it ended with when we got to the apartments she went to her mom and HER mom who is cRaZy, starts chasing the boy who had been teasin her daughter around the apartment complex...SCREAMIN...I'm sick of you messin with my kids...i'm gonna get you, YOU KNOW I'M THE CRAZY WHITE WOMAN and he is just runnin faster with like this HUGE grin on his face...LOL...I'm like okaaaaaay and this is where I make my exit....BUT I guess if you REALLY wanna get technical...it REALLY ENDED with...
.
ME cleanin up THROW UP!!! EWWWWW...Sooooooo NASTY!!! Bahahaha...BUT i guess, REALLY its an HONOR when your doing it for...
JESUS!!!!
♥Mary Frances )
Posted by Mary Frances at 12:00:00 AM