We had AWESOME, AMAZIN CHURCH TONIGHT!!! It was like WOW!!! My hair is PROOF...AHAHAHA...check it out... 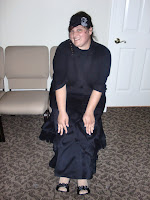 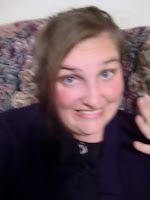 Okaaaaaaaaay soooo...I just HAVE to tell you all about it!!!I was just praying before church about STUFF...and I was just telling God...that there are some things that I just don't get...I don't understand...people...circumstances...things going on...and I was just like God ALL I KNOW...IS THAT I LOVE YOU!!! It doesn't make everthing perfect, it doesn't change all the problems...BUT...I LOVE YOU JESUS!!!! AND that song was on my heart... More than anything...I love you Jesus more than anything...More than worldly wealth...More than life itself...I love you Jesus more than anything. (I can't find the song online...I really wanna listen to it if anyone knows who sings it!!!) I just kept praying I love you Jesus!!! I Love you Jesus!!! I LOVE YOU JESUS!!!
.
SOOOOOOO then church started and IT WAS SOOOOO AWESOME!!! Like the power of God just FELL!!! We were already havin a good song service...AND then the choir sang and you could really feel God AND THEN we were all worshipping and then we started singing who's report will you believe? ANd we all started worshippin and dancing and I just felt like really dancing and then I just started dancing like WILD AND THEN...its hard to explain...its ike I was dancing in the spirit BUT THEN I could feel God just take over me and its like he was moving me and the next thing I know I was slain on the floor!!! It was soooooo AWESOME to be able to feel God like that!!!
.
I've only been slain in the spirit ONE OTHER time!!! It was at Conquror's Conference at the end of  2007 when Bro. Raul Alvear from Brazil preached. I remember he said everyone that has the Holy Ghost needs to take a lap around the building...NOW I normally don't run the aisles at conferences cuz it can be like a REALLLLLY LONG LAP and I'm usually like still only half way around when the song is like OVER...LOL...BUT he said EVERYONE that had the Holy Ghost to take a lap around the building...soooo like EVERYONE was RUNNING!!!
.
Weeeeelll...when I was about half way around the building and it was pretty SLOW runnin cuz we were ALL runnin...but about half way around I remember Bro. Alvear said, Before some of you even get all the way around the building running, God is going to take over you. Well when I got to the front at that conference, I started dancing with a buncha other girls, and then I just started dancing like wild and then the next thing I knew I was slain in the spirit...
.
JUST Like Bro. ALvear had said, God TOOK OVER before I had even made it all the way around!!! I remember feeling such awe of God!!! I didn't even really know what had happened...I was actually REALLLLY SCARED!!! I couldn't move and I was like laying there like OMW am I dying or something??? LOL!!! AND THEN since no one was like calling the ambulance, I was like OKAAAAAAAY this must be God touching me or SOMETHING!!! LOL!!!
.
SInce that time, there have been several times where I have felt God like that...but I reconized it and got scared and stopped it from happening. Buuuuuut...TONIGHT...I felt God taking over and I was like, I AM NOT STOPPING THIS...I NEED GOD!!!
.
I am SOOOOOO thankful that we serve a REAL GOD!!! I am soooo thankful that I serve a God that I can touch an feel!!! Despite ALL the problems and confusion going on...living for GOD is STILL THE BEST LIFE EVERRRR!!! I LOVE HIM SOOOOO MUCH!!! AND when he touched me it was like he was just saying back to me...
I LOVE YOU TOO!!!