ahahahaha...okaaaaaaaay....sooooooo You know what I just think is sooooooo RUDE??? WHEN people on your flight in the seat in front of you put their SEAT DOWN!!! Honestly!!! I think it is soooooo INCONSIDERATE...especially if your on a looooooooong flight!!! Even, my big bro Joe thinks its RUDE...said he has NEVER been on flight and he put his chair back and said...aaaaaaauhhh I'm just soooo COMFORTABLE NOW...so he never does it cuz he hates when people do it to him...and that says A LOT coming from him!!!
.
So its like a 6 hour flight from Arizona to Honalulu...and the short lil dude in front of me puts his seat back...I'm like okaaaaay your short...you don't even NEED any leg space...but whatever it was only 6 hours...which is LONG...buuuuut then from Honalulu to Manila Philippines....its like ELEVEN hours!!! Would you all believe that the guy in front of me did WHAAAAAAAAAAT??? Yes thats right had his seat back for the whole 11 hours!!! I was like...
REALLLY??????
. 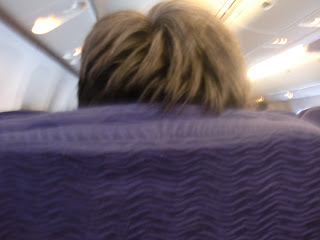 I mean his seat was like LAYING IN MY LAP!!! FOR 11 HOURS!!! 2 meals, a snack and like 20 drinks with my food tray at like MY NECK...ahaha!!!! I was like, OH WOOOOOOW!!! So my brothers were like, oh just give the seat a few good kicks and i tried that...but I don't think they were that hard and I felt like it was being unchristian AND violent...LOL... anywho... buuuuuut this Dude just slept on...and I'm like okaaaaaay your sleepin THAT GOOD...do you really even need your seat down to fall asleep???
.
So I was tellin my cousins later on in the trip about this Mr. Annoyin-rude-dude in front of me and my cousins were like well then you shoulda just put YOUR SEAT BACK so you had more room!!! AND I was like NOOOOOOO cuz thats then RUDE AND INCONSIDERATE OF ME to the person behind me!!!!! AND THEY DIDN'T DESERVE THAT!!!
.
Everyone's like so what did you do??? Who me??? DO SOMETHING??? I'm soooo innocent!!! ;))))  Heeeey lets just put it THIS WAY...God taught Pharoah a lesson with 10 plagues he sent to Eygypt!!!! I taught this man a lesson with JUST ONE very loud plague... that went kinda like THIS.......
ACHOOOOOOOOOOOOOOOO!!!!!!

"Oh sorry I'm coming down with something or I think maybe i'm allergic to your shampoo...or Idk maybe its the fact that you were sooo close to me I accidentally inhaled some of your hair when I was tryin to....oh wait WHAT was I trying to do the whole flight??? Oh yeah... BREATHE...and they tickled my nose which caused me to sneeze...SORRRRY!!! :))))))
♥Mary Frances :)
Posted by Mary Frances at 12:00:00 AM