Soooooooooooo I was chaperoning my brother and his girlfriend last week, which is pretty much the story of my life right now...LOL...AND we went see a play... PRIDE AND PREDJUDICE...AND BOY was I CONFUSED!!! AHAHAHA!!! Now, my wonderful, beautiful, friend, that I won't mention her name cuz she yells at me EVERY time I say her name on my blog...buuuuut she happens to be a  HISTORY teacher at a local Christian Academy..LOL anywayZ ...she absolutely LOVES Jane Austen Novels
.
AND she has tried to convince me of their LOVLINESS...by telling me the WHOLE entire Jayne Eyre novel...which when she was done I was like...wow...THATS REALLY SAD!!! She's like MARY, they LOVED each other, it was BEAUTIFUL...I'm like...ummmmm NOOOO... try WEIRRRRD AND DEPRESSING!!! HAHAHA!!!
.
Sooooo my confusion for the play started out IMMEDIATLEY, mainly because I have NEVERRRR actually read the novel before, so I had NOOOOOO idea WHAT the story line was even about. Soooo it starts out with this black man walking out and introducing his DAUGHTERS that are all WHITE and then his WIFE who is also WHITE...sooooo i'm thinkin like, OH cool!!! This story MUST be about LOVE between a ♥BLACK MAN and a ♥WHITE WOMAN!!! (woot! WOot!!!;) 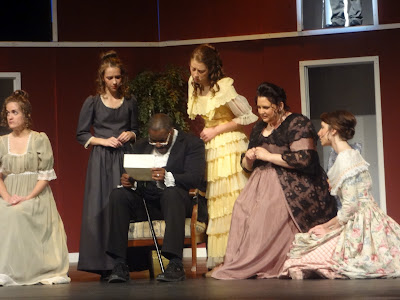 And they must have adopted all these white girls and I bet people were PREDJUDICE against them cuz, hellllloooo, this book was written waaaaaaaaaaay back in the day AND there is NOOOOO way people would have been cool with this happenin!!!
.

Soooooooo AFTER about 20 minutes and NO mention of the dad being black...I turned to Liz in utter confusion and said, sooooooo does the fact that this man is BLACK have ANYTHING to do with the story line, or does the actor just happen to BE BLACK?!?!! She starts laughing and is like, NO!!! I think the actor JUST HAPPPENS to be black!!! 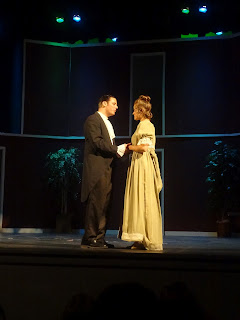 I was like OMW!!! WHat a RIP OFF!!! LOL ( I seriousley think that MY VERSION of Pride & Predjudice is a WAAAAAAY better version!!! Jane Austen, she really consider rewriting her boook;) AnywayZ, the MOST exciting part of the FIRST half of the play was when I sneezed!!! AHAHAHAHA!!! I'm sorrrry...I TRY to do a dainty, lady like sneeze...buuuuuuuuuuuut....with MARY that is NOT possible!!!  My brother was just shakin his head laughin as we walked out for intermission!!! 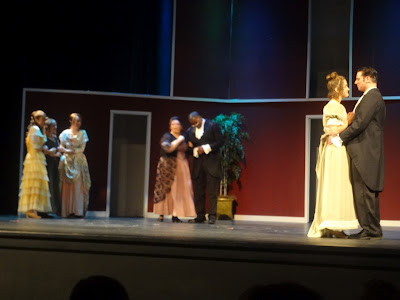 THEN...when we got back the story line got a LITTLE more interesting for me...Mr. Darcy and I forget the girls name FINALLY start talkin to each other decently...and THEN me and the girl NEXT to me were like HYSTERICALLY laughing!!! I had NEVER met these girls before, but we had an INSTANT bonding when Mr. Darcy's Aunt comes in the room....
.
Soooo the aunt  is talkin this chick, that Mr. Darcy is in LOVE with, and she is tellin her, YOU ARE NOTHING!!! You will NEVER have him because, your a nobody, blah, blah, blah, THEN what REALLLLLY made me loose it was when THE AUNT SAYS, aside from all that, you won't have him because HE WILLLL be marrying MY DAUGHTER!!! Then she says,
"Him and his COUSIN have been destined to be together since BIRTH!!!" 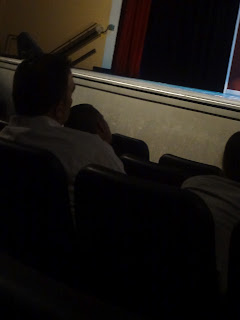 Soooooooooooooo when the play was FINALLLLLY over and we were driving Liz home, I asked my brother WHAT his FAVORITE part of the play was?! Without hesitating he said...
. 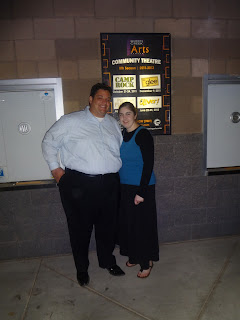 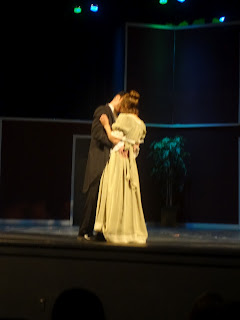 I was like, Awwwww...thinkin my brother was being sentimental and romantic and he was like, NOOOO...because of YOU during the KISS!!! I was like OH YES I forgot about that!!! He's like, I mean they are just going at it on the stage, KISSSING, he's like and its like this total and complete, dead, akward silence in the audience, and the next thing I know, YOU ARE HYSTERICALLY LAUGHING!!! I was like, OMW, that was soooooooo funnnnny, I was laughing soooo hard tears were coming out of my eyes. He's like I KNOW, I heard you snort!!!
.
He said, that if I had NOT been with them, ASIDE from him being with his LIZZY, the play would have been REALLLLLLY BORING!!!(Awwwww)
Yup! THATS ME!!! 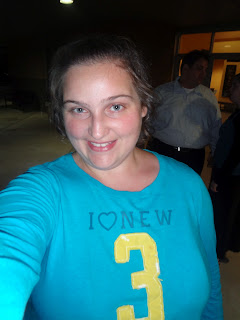