Soooo Esther is STILL in the hospital, BUUUUUUT she is doing REALLY GOOD!!! So yesturday her son was going to be released, but she is still in there so she wanted me to be the one to take him home....AND me Esther signed a buncha papers and I officially have legal and medical custody of him until his mommy is released.
.
Sooooooo I've been GRAND-Mothering...
him like cRaZy....
and I LOOOOOVE IT!!! 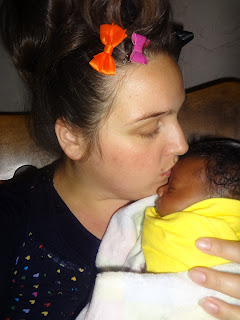 Seriousley!!! I thought being a nanny was THE BEST thing everrr and THEN I became an Aunt and I thought that THAT was just the BEST THING EVERRR.... BUUUUUT NOW I am a Grandma...ANNND its even better!!! Like he KEPT wakin me up last night and like its sooooo ANNOYING..LOL...buuuuuut then as as I pick up and hold him its just like I don't even feel tired anymore!!! HE IS SOOOOOOOOOO CUTE!!! I just hold him laugh and purr at him AND I just LOOOOOOOVERRRS him SOOOOOOOOOOO MUCH!!!
.
BUUUUUUUUUUUT I was thinkin...WHAT is he gonna call me? Cuz he can NOT just call me Mary...and I'm MORE than just an AUNT to him...BUT I am SURE he will be calling Esther's grandma, Grandma, SO WHAT'S MY TITLE GONNA BE??? Then it hit me...I KNEW WHAT HE WOULD CALL ME...
GRANDMARY!!! 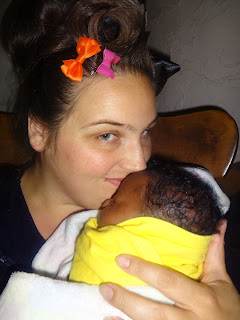 
I told Esther and she just smiled and was like, ACTUALLY thats kinda good! I was like YOU LOVE IT!!! She's like, I didn't say that!!! I was like, BUT you do...cuz if YOU DIDN'T  you would be letting me know!!! Buuuuuuuuuuut I mean PEOPLE THINK ABOUT IT...GRANDMARY...its soooo fits me anywayz...cuz like, my name is MARY...and like...we ALL KNOW...I'm pretty GRAND!!! ;)
Idk...I think maybe my parent's should just named me that when I was born! :D
♥Mary Frances :)
Posted by Mary Frances at 2:11:00 PM