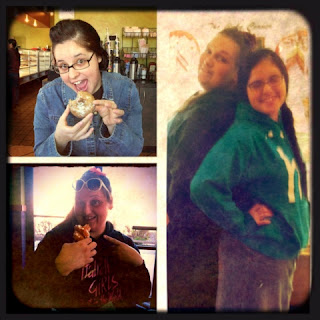 Sooooooooo we're at Rainbow donuts eating our donuts and i'm done with mine!!! Daisy is still eating and telling me a story of some sort...buuuuuut I'm NOT really paying attention...WHY??? Cuz my mind is on just HOW good those donuts were annnnnnd how I wouild REALLY, REALLY, REALLLLLLY like another one!!! Sooooooooooo I'm just gazing LONGINGLY at the donut case, thinkin about getting another donut annnnnd IF I do which one will I get???
.
Weeeeellll...Daisy notices that i am NOT paying attention to a word that she is saying, soooo she stops talking and looks to see WHAAAAT I am possiblely looking at that I wouldn't be paying attention to her!!! Sooooo she looks, then just shakes her head and is like, I KNEW IT!!! I'm like WHAT??? She's like I KNEW it was a guy!!! I'm like HUH??? Soooooo I look at there is a CUTE black man standing at the counter getting ready to order!!!
.
I'm like, Okaaaaaaaaay NOOOOOOOOO!!!! It was NOT even him!!! I promise you...I was debating if I should get ANOTHER donut or NOT!!! She is like, WHATEVERRR!!! I'm like WHY is it soooooo hard for you to believe that I wouldn't want ANOTHER donut??? Look at mE...I'm FAT...You don't think I could or would WANT to have another dounut?!?! She is like, Uh huh, i'm sure...Sooooo i'm like, OH you don't believe me?! Thats IT!!! I get up and say, MY DECISION is MADE!!! I'm getting ANOTHER DONUT!!!
.
She is like, OH YEAH!!! I'm SURE YOU WILL NOW!!! Sooooo I realize as I walked over that I just made my case of INNOCENCE just look even WORSE!!! Cuz NOW I'm standing behind this man at the counter...THEN...He turns around smiles at me, says HI, how are you and proceeds to make some small talk with me annnnnnnnnnnd THE WHOLE time Daisy is just LAUGHING!!!! HAHA!!!
.
I sat down with my donut and Daisy is like...sooooooooo he talked to you!!! i'm like WHATEVERRR!!!  Its JUST cuz i had my
ITALIAN GIRL HOODY on!!! 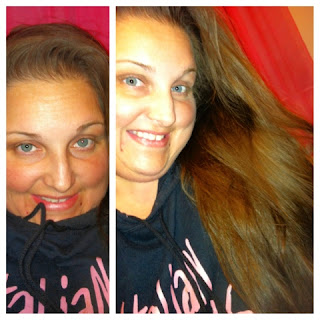 My Italian girl hood starts conversations with me EVERYWHERE I go...its like my Super girl hero cape or something!!! People see me with it on and there just like OH...SHE IS ITALIAN...that means she can COOK...and KNOWS how to have FUNNNN!!! Annnnnd then they are just in awwww of my ITALIANNESS!!!

I'm like BESIDES...He isn't even dark enough for me!!! I mean, yeah he was chocolate buuuuuut he was soooo light skinned chocolate it felt like he was just like Palmer chocolate!!!

You all know what I'm talking about??? Its that one really cheap brand of chocolate that doesn't really taste very good and isn't worth the calories!!! I mean, yeah, its chocolate...KINDA...buuuut KINDA NOT!!! Welllll thats how he was!!! I mean, I'm NOT a Palmer-Chocolate kinda girl!!! I LIKE CHOCOLATE CHOCOLATE!!!
.
Buuuuuuuuuuuut Daisy STILL isn't convinced!!! She STILL thinks I was TOTALLY checking out this guy!!! Of course, it doesn't HELP that he KEPT walking by our table to get napkins...Which kept making us  go into fits of laughter!!! HAHAHA!!!
.
Soooooooooooooo WHO DO YOU ALL BELIEVE???
DAISY says...I was looking at this chocolate man!!!
MARY says... I was looking at the donut case!!! 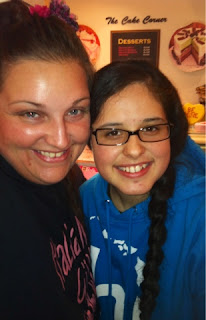 What do you all think is a STRONGER distraction???
The lure of a cute chocolate man OR the lure of ANOTHER donut???
Buuuuut HONESTLY IT WAS THE DONUT!!! ;)
(I really wanted a chocolate one!!!)
♥Mary Frances :)
Posted by Mary Frances at 4:43:00 PM