Soooo like I said in the April Fresh Fire post...Selina and Aurora had me CRACKIN up the WHOLE night!!!! Buuuuuuuuuuuut the FUNNNNNIEST thing they said to me the whole entire night was on the drive over! They were talking about some guy, we'll just call him, CHING-CHONG!!! Soooooooo I know a CHING-CHONG annnnnnd it seemed sooooo odd to hear this young of girls to be talking about him!!!
.
I'm like, WOW girls are interested in Ching-Chong CHOW??? Kinda OLD for you girls!!! They're like OH NOOOOO, NOT Ching-Chong CHOW, a different Ching-Chong, we don't know his last name buuuuuut he is like 15...I'm like OOOOOOO gotcha!!!
.
So then being the BIG TEASE that I am, I ask Delora, who is a lil older than Selina and Aurora, i'm like, WHAT about YOU, what do YOU think about Ching-Chong CHOW??? She is like UH NOOOOO...NOT MY TYPE!!! Soooooo i'm like OH OK! Im like well I don't think he is a bad guy...Selina is like, weeeelll I guess he ALRIGHT and Aurora, the YOUNGEST, then speaks up and is like WELL, I THINK HE IS OK!!!
.
I'm like OOOOOO Aurora thinks he is OKAAAAAAAAAAAAAAAY!!! Like ooooo...Selina is like, weeeeelll I guess he is HALF OK!!! AHAHAHAHA!!! So Aurora is like yeah, I think HALF OK TOO!!! Then this is the part that just had me cracking up ALL NIGHT LONG! She goes, half OK... LIKE...
"He's the O in OK!!!" 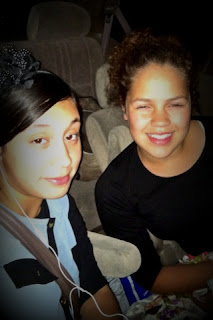 BAHAHAHAHAHAHAHAHAHA!!! Like Literally just the O!!! Then they were talking about the OTHER 15-year-old Ching Chong and there like, yeah, he puts the F in FIIIIIIIIIIIIIIINE!!! AHAHAHAHAHA... Poor Mr. O...I mean personally, I woulda given him the FULL O.K.!!! Or at least a O.5K...or an O.1/2K...LOLOLOL...Buuuuuuuuuuuuut yeah, the next time your not sure how to describe someone your NOT into...just be like...well he's the O in OK!!! Oooooo YOU KNOW WHAT IM GONNA SAY??? I'm gonna say...
He puts the NOT in...