Sooooooo as I commented on Anali's post about my surprise 30th birthday party, I STILL haven't even blogged about it...like I'm soooo astounded by the party and there was soooo much going on I don't even know how to organize my thoughts and sum it all up!!! I guess you could say it ALL started...
TWO YEARS AGO!!!
YES REALLY...
TWO YEARS AGO!!!

LOLOLOL!!
Or SOMETHING like that!!! HAHA!!! See WHAT happened was that my sis was turning thirty, Oct 1st 2010, annnnnnnnd she warned me BEFORE HAND...I do NOT want a party!!!! I don't want a surprise party!!! I don't want to do something with a huge group of people!!! I want to do something fun and nice...but remember i'm NOT YOU!!!
.
I was like okaaaaaaay whats something I wouldn't want to do??? Hahaha!!! J/k! Thats NOT true cuz I pretty much LOVE do anything thats fun or with people that I love!!! We started off the morn by going with my mom to this really good place called butterfields, then my mom and I gave her a gift card to get her FIRST real COACH purse!!! Then me and her went SHOPPING... 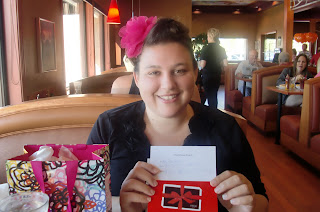 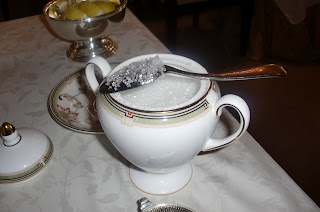 There may have been a FEW Classic Mary Moments at the TEA...like the wet spoon I stirred my tea with...going into the Sugar bowl...OOOOPS!!! LOL
.
AnywayZ, we had a GRAND time annnnnnd it was EXACTLEY what Theresa likes!!! Howeverrrr...that NEXT JULY, when I turned 28, I informed my sister annnnnnd ANYONE that cared to hear THAT, when I turned 30, ALL I wanted was a HUUUUUUUUUUGE, ELEBORATE, SURPRISE PARTY!!! Because, UNlike my sis, I LOOOOOVE being the center of attention large groups of people, and talking to everyone and yeah...you all know how i am !!! ;)
.
I don't want some expensive purse...blah, blah, blah...I just wanna HAVE FUNNN... WITH EVERYONE!!! Soooooooo I let them all know that they had TWO YEARS to plan it and that YES it did HAVE to be a SURPRISE...cuz I had NEVER had a surprise birthday and NO ONE HAS EVERRRR managed to ACTUALLY SURPRISE ME BEFORE!!!  Heh, heh!!! ;)
.
Sooooooo MY SISTER and family gave me EXACTLEY what I wanted...a huge, elaborate, SURPRISE party I DID indeed get!!! My sister even paid to fly out Hanna and Anali for me annnnnnnd Joe and Daisy came all the way in from Roswell for it...Lorraine, Christina and Eric from Tucson and then people all over from the local cities and my home church and family friends...AWWWWWW...I FELT SOOOOO LOOOOOVED!!!
.
According to  my family and friends, YES, I was actually SPEECHLESS...for a few moments!!! My sis said I was just like all quiet, then I just started saying, OMW! Omw! Omw!!! OMW! (My mom calculated that I said OMW over ten times...she doesn't aprove of me saying that buuuuut yeah...I don't even remember saying it AT ALL!!! HAHA!!!) ANNNNNND my sis said that everytime I said OMW, it just got louder and louder and louder!!!
.
Theresa said, I HONESTLY didn't think you could ever get any louder!!! BUUUUUUUUUUUUUUT
like a GOOD LITTLE SISTER... 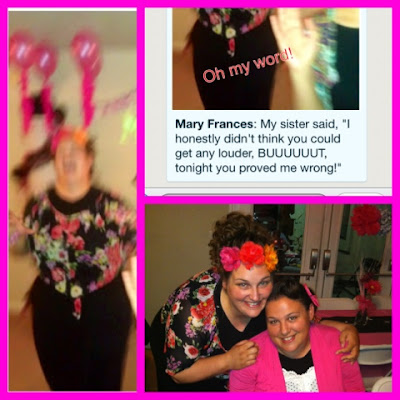