Sooooooooo i'm sitting here TODAY at Starbucks, annnnnnnnnnd imagine the double take I took when i looked up to see THIS... 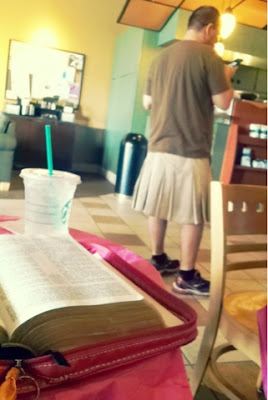 YES, thats a man in a skirt!!! Not a gay man either, just A MAN...chillin...running his daily errands...gettin a cup of coffee...IN A SKIRT!!! Its not a kilt either...the thing that really got me was that he was waiting on a woman in the ladies room...she came out and over to him...wearing PANTS OF COURSE!!! They walked out together like nothing about them was abnormal!!!
.
You know, there was a time when THAT woman wearing those pants was just as OFF and weird as a man wearing a skirt!! I was telling one of the Sunday School girls, Leina, when she was staying with me a few summers ago, I was teaching her about standards of holiness that we believe and I was telling her that very thng, there was a time, when it was WEIRD for woman to wear pants!!! I asked her if she would think it was odd to see a man in a skirt and she said YES!!! And I told her, thats the way it USED TO BE to see a woman in pants!!! Its MEN's APAREL!!!! And I told her, buuuuut there is coming a day when THAT oddness of seeing a man in a skirt is going to be taken away and it is going to become "NORMAL" to see a man in a skirt!!!
.
Right after that time I had bought this funny shirt of the smurfs...cuz the smurfs are kinda like cute and funky and you know me, I'm drawn to anything thats DIFFERENT and CUTE...AHAHA...just sooooo long as it doesn't go against Biblical teachings of course!!! So I took the kiddos to McDonald's and the toy in the happy meal at that time was lil smurf figures!!!! I was like OOOOO I'm gonna collect ALL of these!!! Buuuuuut I was lookin at the lil pic of all the ones that you could collect ANNNNNND GASP...
.
There was one called something like DARING...annnnnd this was a boy smurf in a skirt!!! I was like WHAAAAAAT???? Annnnnnnnnd it was NOT trying to say that this smurf was gay! It was just saying that he was a "Normal" boy that had the GUTS to wear a skirt! I was like NOOOOOOOOOO WAAAAAAY!!!
.
I went home and threw out my smurfs shirt!!! After seeing this man today at Starbucks I realized that this is GOING to become the norm soon. It will drift in slowly...first it will be a dare...the weirdos will embrace it first but the devil will find a way to break down every barrier and seperation between the aparel of a man and a woman!!! WHY??? Because of one simpe reason, he knows its an abomination to God!!! He knows God HATES IT!!! He knows it makes God CRINGE at the sight of it!!!
.
I remember my mom talking about how when she first got in church it was soooooo HARD for her to give up wearing pants. She said she came to church for a full year before she gave that up, before she finally got the victory and got rid of all her pants! I imagine that there is coming a day, perhaps even before we die, if God doesn't come for us first, there is coming a day when MEN that get into church are going to have to "GIVE UP" wearing skirts! Not, gay men, JUST regular men of the world are going to come to God and are going to have start learning what men's aparel is. A day when the dress of an Apostolic man will stand out stronger, simply because it is NO LONGER the "Norm" for worldly men to always wear pants!
.
Don't let yourself grow immuned to it! Don't let yourself stop thinking that is wrong, that its weird, that its UNGODLY!!! We can't fall to the whims of this world! We've got to stay STRONG in our SEPERATION!!! If God cringes over something, we NEED to cringe over it...because we're GODLY people!!!
"The woman shall not wear that which pertaineth unto a man, neither shall a man put on a woman's garment: for all that do so are abomination unto the LORD thy God."(Deuteronomy 22:5)
♥Mary Frances :)
Posted by Mary Frances at 4:21:00 PM