Sooooo I KNOW that people aren't supposed to have favorites, buuuuuuut...I feel like I should be MJ's FAVORITE AUNT!!! Because I mean, I'm MORE than just an AUNT, she like my little sister too!!! Sooooooo on a daily basis I as her who her favorite aunt is and she ALWAYS says me!!! So then today I was like, soooo who's your favorite uncle???
.
She's like, I'll have to think about that! So a minute later i'm like, WEEEEEELLLL... have you figured it out yet??? She's like, I'm STILL thinking about it!!! Finally, she names ONE of my brother's...I'm like OH...Okaaaaaaaaay buuuuuuuuut...
.
WHEN I GET MARRIED...My husband WILL BE, your favorite UNCLE THEN...RIGHT?!?! She just looks at me and is like, I don't know!!! I'm like WHAAAAAT??? She's like, Weeeeeelllll...I don't know...it DEPENDS on WHO YOU MARRY!!! She goes, I MIGHT NOT LIKE HIM!!! I'm like Oooooo girrrrrrl...
.
So I start naming different guys! First two guys she was like, YES! I would like him! Third guy she was like, Noooooooooo HE IS SOOOOOO WEIRD!!! AHAHAHA!!! Fourth guy she pauses to think about him then says, yeah, he's fine! Then I named one more guy and she was like, NO! So i'm like, Ok, WHY NOT?!?! She goes, BECAUSE, HE NEVERRRR SMILES!!! I was like, Whooooooa!!! THIS GIRL is observent!!!
.
Some guys worry about making the dad's aproval...buuuuuuuut WHOEVER marries ME,
BEWARE OF MY NIECE!!! 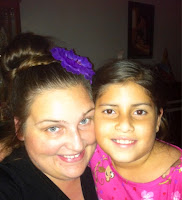