Soooooooo LAST Wednesday I made brownies for my youth to sell after church for a fundraiser. Now there was mixed feelings about these brownies, BECAUSE, some people thought they were TOO chocolatey!!! (My BROTHERS) Which I'm pretty sure is an impossibility, BUUUUUT it all depends on just HOW MUCH you like chocolate!!! So I was asking one of my friends what THEY thought, I said I was just wondering if they agreed with my brothers, I didn't know because I hadn't actually tasted them. And they said, that I should really taste my own creations!!! I was like OH TRUST ME, I wanted to...buuuuuut...DIET...story of my life...right???? (Mom's still believing in me for those 50 pounds before WCC!!! LOL) Sooooo I had to with-hold myself from MY OWN creation!!! *Sad! :( 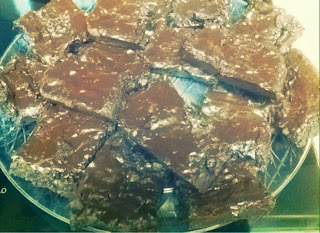 Buuuuut it made me think for a minute about how we are GOD'S CREATION!!! He made us!!! However, God didn't just make us and then hold himself back from us!!! Thats a very common theory in the world we live in today. People think, WELL...IF THERE IS A GOD... he just created and then stepped back from his creation. They think that God is aloof and that he doesn't really care!!! That is NOT what our God did!!!  The Bible says, "Surely he hath borne our griefs, and carried our sorrows..." (Isaiah 53:4)
.
FURTHERMORE, God NOT only created us, he took it a step further and BECAME his own creation!!! God became a person!!! He put on flesh JUST like us. Unlike the way I didn't even taste my own brownies, God did NOT have to wonder what it was like to be us, because God TASTED HUMANITY!!! God knows WHAT it is like to be US!!! God takes pleasure in being able to partake and commune with his creation!
"For we have not an high priest which cannot be touched with the feeling of our infirmities; but was in all points tempted like as we are, yet without sin.
(Hebrews 4:15)
♥Mary Frances :)