I think that I forgot to tell you all this, buuuuuut there is an elderly man in our church that is hard-of-hearing so I type out the preaching messages for him on my lap top...yes, yes, just call me an INTERPRETUR...ha! Anywayz, I've been doing this for about 9 months now and I've gotten pretty fond of this man!!! He has a really funny sense of humor and is always cracking up by his own corny jokes.
.
Weeeeeeellll this past Sunday, mother's day, his joke of the day was, EVERY MOTHER, should have A CHILD!!! LOLOL!!! He was telling it to everyone and just totally cracking himself up! Then when pastor got up and was giving his mother's day greeting, Bro. Earl turned to my mom and says, ANNNNND EVERY CHILD, should have A MOM!!! We were all just cracking up cuz he talks soooooo LOUD cuz he can't hear himself either!!! LOL
.
Soooooooo May 14th is his 87th birthday so I brought him some balloons from the Dollar Tree, and some Lemon Lush I had made, he was like soooooooooo HAPPY ABOUT THEM...both, buuuuuut ESPECIALLY THE BALLOONS!!! 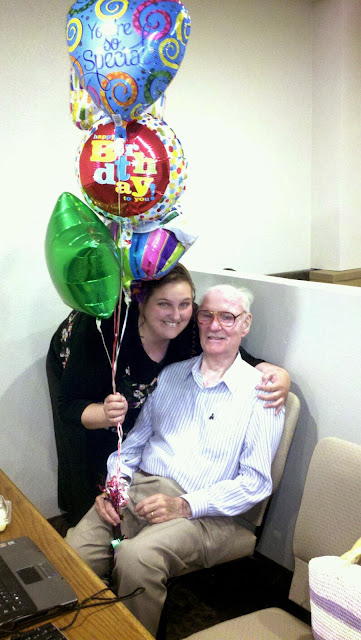 I mean seriousley, I had NO IDEA they would be that big of deal to him. He said, I've never gotten balloons like that before!!! I was like, AWWWWW!!! $6 and I made his day...which in turn made mine!!!
.
Buuuuuut it was really funnnny cuz when Pastor announced to the whole church it was Bro. Earl's, birthday, and then in turn to Bro. Earl's "Every Mother should have a child" joke, Pastor says, "Every 87-year-old, should have an 87th birthday!" He didn't hear it when Pastor said it so I YELLED IT TO HIM after church and he starts chuckling, he's all, that's GREAT! That's GREAT!!! 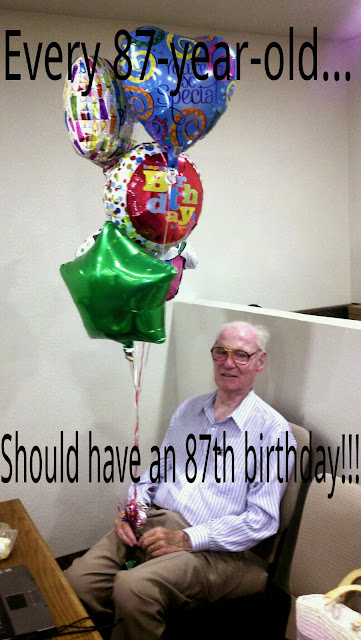 Buuuuuuuuuuuuuuuut the best part of this story is that on Monday I got a text from pastor with some AWESOME-AMAZING news!!! I was like soooooooo ESTATIC...I raced over to my mom's to tell her and as I was walking down the hall to her room she yells out MARY DID YOU HEAR??? Did you HEAR??? Aparently, Pastor had sent her the same text and she was equally even MORE estatic about this than me!!!
.
I was like running around on Monday telling everyone, I HAVE THE MOST AMAZING NEWS to tell you all!!! Someone jokingly said, What???? Did Ching-Chong ask you out??? I laughed and jokingly said, NOOOOOOOOOOOOOOOOOOOOO its better than that!!!
This SUNDAY, BRO. EARL IS GOING TO BE BAPTIZED IN JESUS NAME!!!!
I'll expound further in a later post but Bro. Earl has already had the Holy Ghost for some time now but needed to complete his salvation with baptism in Jesus name!!! HE has FINALLY gotten the revelation...
THIS SUNDAY THERE WILL BE A NEW NAME WRITTEN DOWN IN GLORY!!!
That's better, Waaaaaaaaaaaaaaay better than any guy EVERRRRR asking me out!!!
♥Mary Frances :)
Posted by Mary Frances at 12:00:00 AM