Sooooo I wanted to finish telling you all the testimony of Bro. Earl, the elderly man in our church that is hard-of-hearing, You know, I've told you all about him before. He's just an elderly man that randomly visited our church my mom had made good friends with him and he began telling her that he thought he was just going to switch churches because he was getting nothing out of our services because he couldn't hear the preaching.
.
My mom was like, INSISTENT that he not leave. She was like, MARY we have to do something he can't go to another church that doesn't preach the truth! She was like, how about you start typing out the messages for him on your keyboard for him? I was just kind of like, UMmmmm...Like to be honest I really didn't want to do it! I mean, my thing is KIDS, not elderly people!!! (I'm jus sayin')
.
Buuuuuut my mom was insistent and sooooo I agreed to do it!!! Almost immediately him and I clicked, ( NOT jus on the keyboard...HA!) ya know I would type to him on the screen my kind of greetings, Like, Good Morning Bro. Earl, Looking GOOD TODAY!!! HAHA! You all know how I am!!! ;) He immediately LOVED me, because, weeeeeeeellllll BECAUSE I'M MARY annnnnd ya know, EVERYONE LOVES ME!!! Hee, Hee!!!
.
Now Bro. Earl had gotten the Holy Ghost but he never would get baptized in Jesus name. He kept insisting that he had gone to some Pentecostal church as a child and was baptized in father, son and Holy Ghost titles. Over and over again my mom would read to him Acts 2:38 and say but you have to be baptized in Jesus name. He told my mom that he talked to a brother and a sister and a twin sister and they are all good Christians and they told him that he doesn't NEED to be baptized in Jesus name!
.
My mom would tell him, Jesus is the name of the Father and Jesus IS the name of the son and Jesus is the Holy Ghost and his response would be, and I already got baptized in the father, son and Holy Ghost and that's who Jesus is, so he is fine then. (AAAAAHHHHHH)
.
Sooooo it just seemed like an endless cycle, buuuuut WHENEVER pastor would talk about Jesus name baptism I would take A LOT of TIME typing that out for him. There was even at one point that he was so frustrated about Jesus name baptism that he told my mom maybe he should just find another church. My mom was like, NO! She told him JUST KEEP COMING!!!
.
So he kept coming and I kept typing! Weeeeelllll and to once again be honest, I will admit that there were times that whoever was preaching was telling a story that was to long or hard for me to type out an explanation, so I would just be like OK its time for me to start telling him again about one God and Jesus name baptism! I mean, I didn't want to be offensive to him BUUUUUT he NEEDED GET BAPTIZED annnnnd if I was gonna be typing, he was gonna be seeing that!!!
.
So I remember this one Sunday after typing for him, I was at home that day and I thought man, I love Bro. Earl SOOOOO MUCH NOW, buuuuuuut I WONDER IF HE IS EVER going to GET IT!!! I WONDER IF HE WILL EVER GET BAPTIZED IN JESUS NAME????
.
The next day, I got a text from Pastor that said, WELL, Bro. Earl finally sees it! He just called and said that NEXT SUNDAY, he is going to be baptized IN JESUS NAME!!! I WAS SHOCKED!!! I immediately switched the direction of my drive and went to my mom's house. I'm going down the hallway to my mom's room to tell her and she yells out MARY??? Did  you get the text from pastor? I was like YES!!! My mom was like EXUBERANT with joy!!! Really we were both just estatic!!!
.
So later on that day my mom talked to him on the phone, he has some sort of phone system that types out for him what the person on the other line is saying. Anywayz, he told my mom that he had talked to one of his brother's that he hadn't talked to in several years, and he was telling his brother that he was going to this Pentecostal church and that they have been telling him that he needs to be baptized in Jesus name, what does he think about that? And he said that his brother said, YES, that's right. Then he told my mom, THEN, my brother quoted to me that SAME scripture that YOU always quote to me.
.
I was like, OH and what scripture was that Mom? She's like, ACTS 2:38 OF COURSE!!! It just so happens that this brother that he hadn't talked to in several years goes to a Pentecostal church in Florida! HOW AWESOME IS THAT??? He also told my mom that it just seemed like EVERY SUNDAY, whoever was preaching ALWAYS got in JESUS NAME BAPTISM. My was laughing when she told me and she was  like, did you have something to do with that? I was like weeeeelllll I may have helped that out a lil bit...Hee, hee!!! ;))))
.
All week long I was kind of just holding my breathn in anticipation of this baptism, I was so excited but at the same time I was just hoping he wouldn't change his mind!!!
.
Buuuuuuuuuut HE DID NOT CHANGE!!!

His mind was made up Annnnnd then that next Sunday it happened!!!
Bro. Earl was baptized IN JESUS NAME!!!!!!!!! 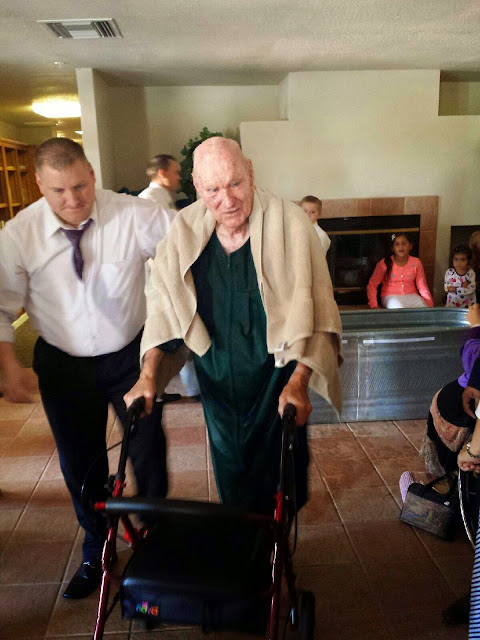 I'm just IN absolute AW when I think about it!!! I don't want to sound morbid but he is ready to go to heaven now!!! How awesome is that??? At 86 years old HE GOT THE REVELATION OF JESUS NAME BAPTISM!!! Its real people!!! ITS REAL!!!! It happened...JUST LIKE THE BIBLE SAYS!!!
.
"Then Peter said unto them, repent and be baptized, EVERY ONE OF YOU, in THE NAME OF JESUS CHRIST, for the remission of sins, and ye shall receive the gift of the Holy Ghost." (Acts 2:38)
♥Mary Frances :)
Posted by Mary Frances at 6:49:00 PM