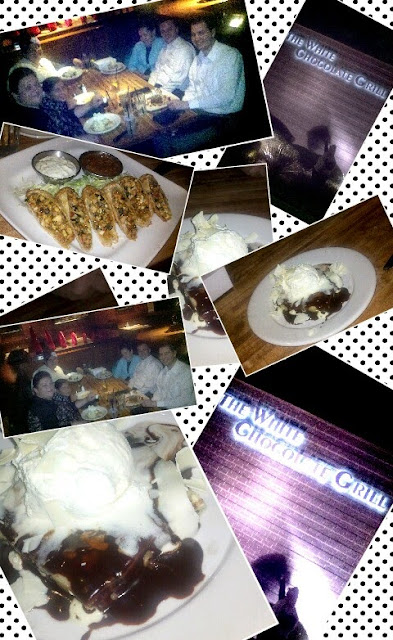 First of all, I just want you all to know that SUNDAYS are my splurge day, it always starts off getting up in time for Coffee and donuts at church...obviously, someone is feeling GUILTY and feels the need to EXPLAIN themselves...NO clue WHO that person is tho...Hee, hee!!!
.
ANYWAYZ, Tonight, Seth, Alyssa, Me, T, MJ and Stultz all went to White Chocolate Grill!!! If you all have NEVERRRR tried this place before and we've been planning this since July...I make everyone mark their calenders...ANYWHO,  it is AWESOME!!! After good church I was STARVING tonight, but I didn't want to get an actual meal cuz we HAD to get dessert...So I got the AZ egg rolls and it comes with this Jalepeno dipping sauce and salsa....it was sooooooooooo GOOD!!!  Everyone was really pleased with what they got...T got this French dip tri-tip sandwhich... Can't remember what everyone got buuuuuuut NO COMPLAINTS with out meals... Alyssa got these chicken enchiladas AND she ACTUALLY took home the leftovers...SOOOOO YOU KNOW SHE MUSTA LIKEDTHEM!!!
.
Theeeeeeeeen the EXCITING part...DESSERT TIME!!! Oh praise DA Lord...I looked at my dessert when the waitress gave it to me and said, GOD IS GOOD!!! Then I took a bite and said, GOD IS SOOOOOOOOOO GOOOOOOOD!!! The only people that were disappointed were poor Seth and Alyssa, they got the bread pudding...EWWW...unless your ALREADY a fan of bread pudding...which I don't know WHY anyone would be... I tried theirs and was like...wow I'm SORRY...sooo yeah...DO NOT GET THIS...LOL..UNLESS you LIKE BP!!!
.
Sooooo... T got the Banana cream pie and she said it was good, buuuuuuut she said my white chocolate blonde brownie was BETTER...I agreed with that...basically we all tried each others desserts and everyone agreed that my blonde brownie was the best, except Stultz said that his White Chocolate Raspberry Cheesecake was in a class of its own and I kinda have to agree...it was really like REFRESHING and summery tasting.
.
The only two desserts that we didn't try was the Apple Pie...Kinda doubt could better than mine ya know?!?! and Then the Silky Chocolate Souffle Cake A warm chocolate soufflé cake served with Crème Anglaise and whipped cream...for some reason we saw GLUTEN free under it and everyone was like, OH NOOOOOO...IT MUST BE HEALTHY OR SOMETHING!!! LOLOL Then I see the lady across the way from us with it and it did NOT look healthy at all!!! I was just like GAWKIN at it...Like LOOK ...THAT DOESN"T LOOK HEALTHY TO ME..til everyone told me to calm down...and MJ told me I was being creepy staring at her cake in shock!!! BAHAHA! Anywayz, I HIGHLY recommend the White Chocolate Grill to you all!!! There is ONLY one in AZ soooooo go HERE for more details!!
.
I've been really into planning for us to try NEW places!!! Recently, instead of going to our USUAL boring OLD Chilis EVERY time we have been trying NEW places!!! It started when they let Stultz pick where to go to eat one Sunday night, Next thing I know we are going to LONGHORNS...YUP... like any typical male, he chose a steakhouse...In July we tried Cheddars in Gilbert, Blue Adobe Grill right near our church, Sunday, August 24th, in between Sunday services we are trying Aunt Chiladas...According to Stultz, its THE BEST ever Mexican food...I'll let you all know if it beats CHEVY'S tho... THEEEEEEN, Sunday, September 7th, in between services, we are going to  Lolo's Chicken and Waffles....Guess who picked THAT??? Hee, hee!!! Sometimes you just GOTTA have some SOUL FOOD!!! Uh huh...MmmmmHmmm!!!
.
Two other places on my list for the future is the BBQ place that Stultz's dad was talking about on the fourth of July, can't remember the name buuuuut he said its THE BEST...Ooooo ANNNND Piggly's in Mesa...I heard that place is a lot of fun!  I was like OH annnnnnnd then there is this place called Black Bear Diner...
.
and Theresa and Alyssa were like NOOOOOOOOOOOOOOOOOOO that place is DISGUSTING!!!! I was like WHAAAAT???? Buuuuuut they have cuuuuuuuuuute bears EVERYWHERE THO!!! I really thought it was good food and had a homey feeling buuuuuuuuuut OKAAAAAY THEN...I gotta go with my peeps...sooooooo OKaaaaay THEN!!! Anywayz, if anyone has some good OR fun ideas for places to try LET ME KNOW!!! We're having FUNNNN!!! I'll keep you all updated on all our food adventures!!!
Anywayz, THIS was about THE WHITE CHOCOLATE GRILL don't forget to TRY it!!!
♥Mary Frances :)
Posted by Mary Frances at 12:00:00 AM