This day was anotherrr one of my FAVORITE DAYS...its pretty much a toss up between Hanna's Big day of surprises Part 1 and this day...buuuuut I THINK this last day will have to win annnnnnd I'll tell you WHY in just a minute!!!
.
Soooooooooooo the day started off at STARBUCKS!!! Weeeeeellll actually it started off with us getting ready for church...Im pretty sure I impressed Hanna with how fast I can get ready for church!!! LOL THEN we headed to Starbucks where we met with ANALI!!! We had ONE LAST TIME TOGETHER!!! 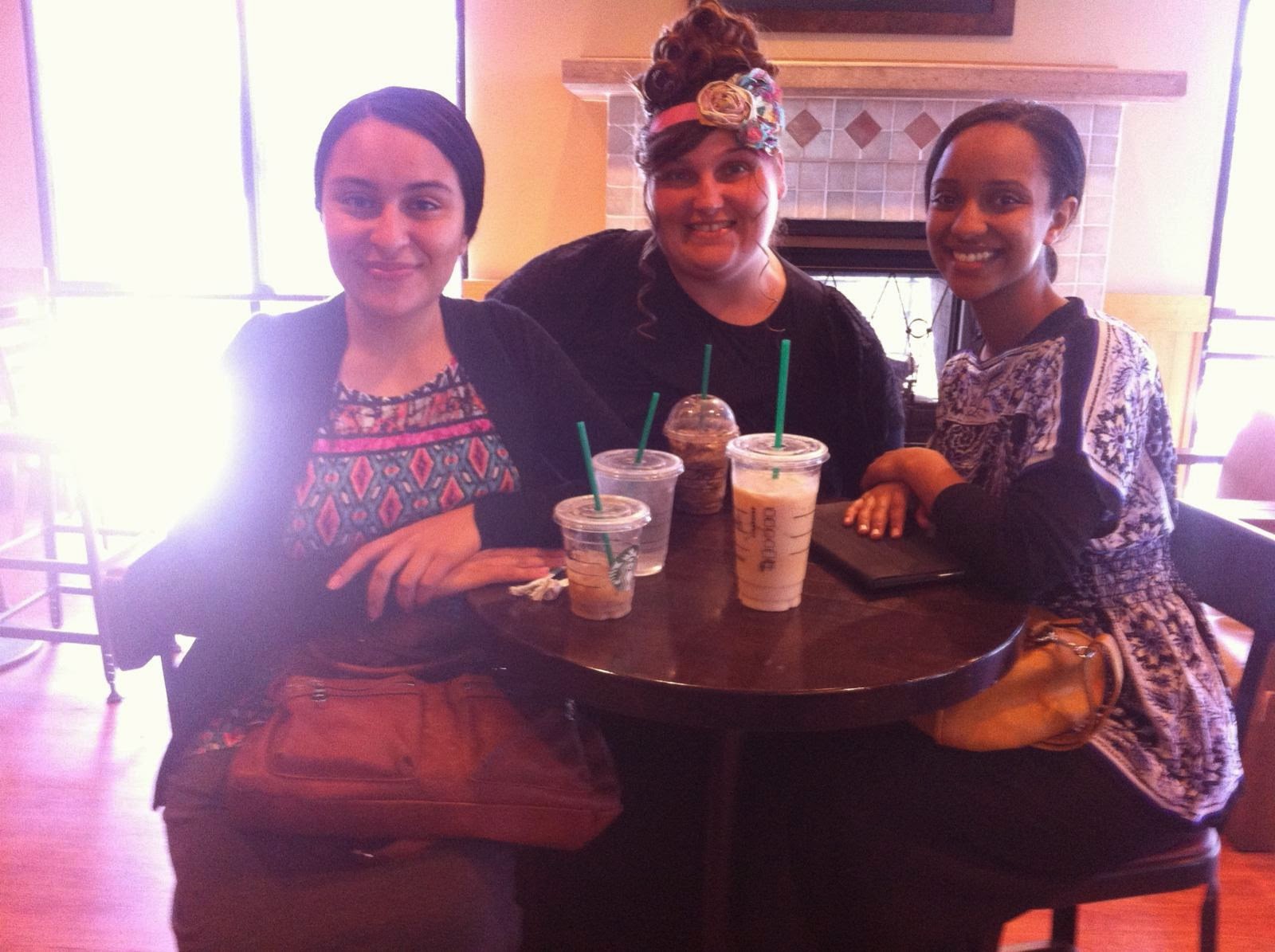 Then we headed to church!!! I was soooo siked about church in Berkley this morning!!!! I kept telling Hanna, I just KNOW that Seyon is going to get THE HOLY GHOST TODAY!!! She is!!! She HAS TOO!!! I JUST KNOW IT!!! (Remember Seyon is Hanna's cousin!)
.
Soooooooo I hung out with Hanna and Coco er Pastor Kifle as they prepared for church that morning....weeeeeeeellll actually I just sat there as Hanna practiced music and Pastor. Kifle realized that he had forgotten his preaching notes...Somehow he did JUST FINE preaching without them!!! See, WHO NEEDS NOTES when you got the anointing!?!?! 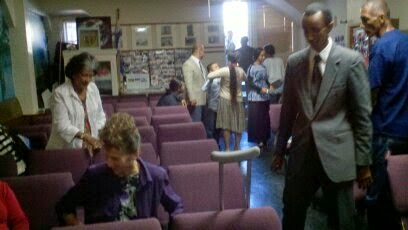 Then it was time for pre-service prayer annnnnd then greeting everyone annnnnd THEN WE HAD CHURRRRRCH!!!! 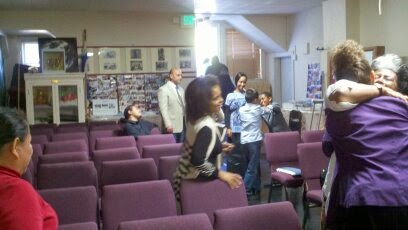 After some GOOOOD preaching we had a A GOOD alter call!!! Seyon prayed REALLY, REALLY, REALLY GOOD, buuuut she didn't get the Holy Ghost!!!! HOWEVERRRRR after church...

SHE DID GET BAPTIZED!!! 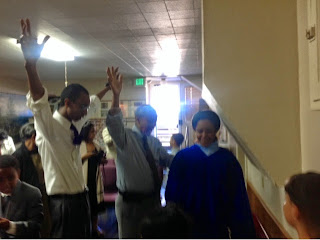 Here she is, IN THE TANK, GOING DOWN IN JESUS NAME, ALL HER SINS BEING WASHED AWAY!!! 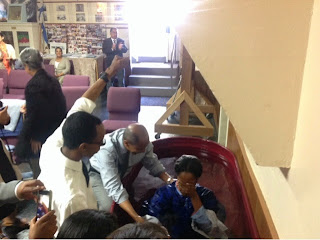 Annnnnnnnnnnd that MY FRIENDS is what made this day better than ALL THE OTHER DAYS!!! 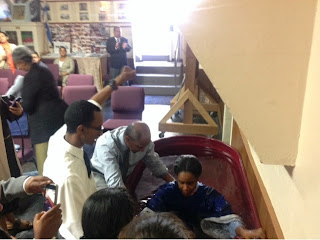 Because my precious NEW FRIEND GOT BAPTIZED IN JESUS NAME!!! 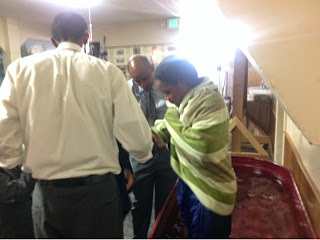 The fun stuff that happened later on would have just TIED it with our crazy WILD adventure with Coco when he gave Hanna the iPad, buuuuut yeah, THIS DEFINATLEY outweighed EVERYTHING!!!
.
After the baptism, we all went into the church kitchen and dining area and ate together!!! I think the Berkley church does that every Sunday after morning service. I LOVE that!!! Growing up, the Abbotts used to do that EVERY WEDNESDAY night after service!!! Brings back memories!!!
.
Me and Sis. Kifle!!!
One of the sweetest woman of God that you'll ever meet!!! 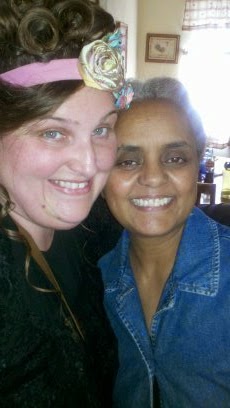 Me and Mesgana!!! I looooove this kid!!! We have purrrrring time together and he gave me my ETHNIC NAME of SHANAYNAY!!! LOL 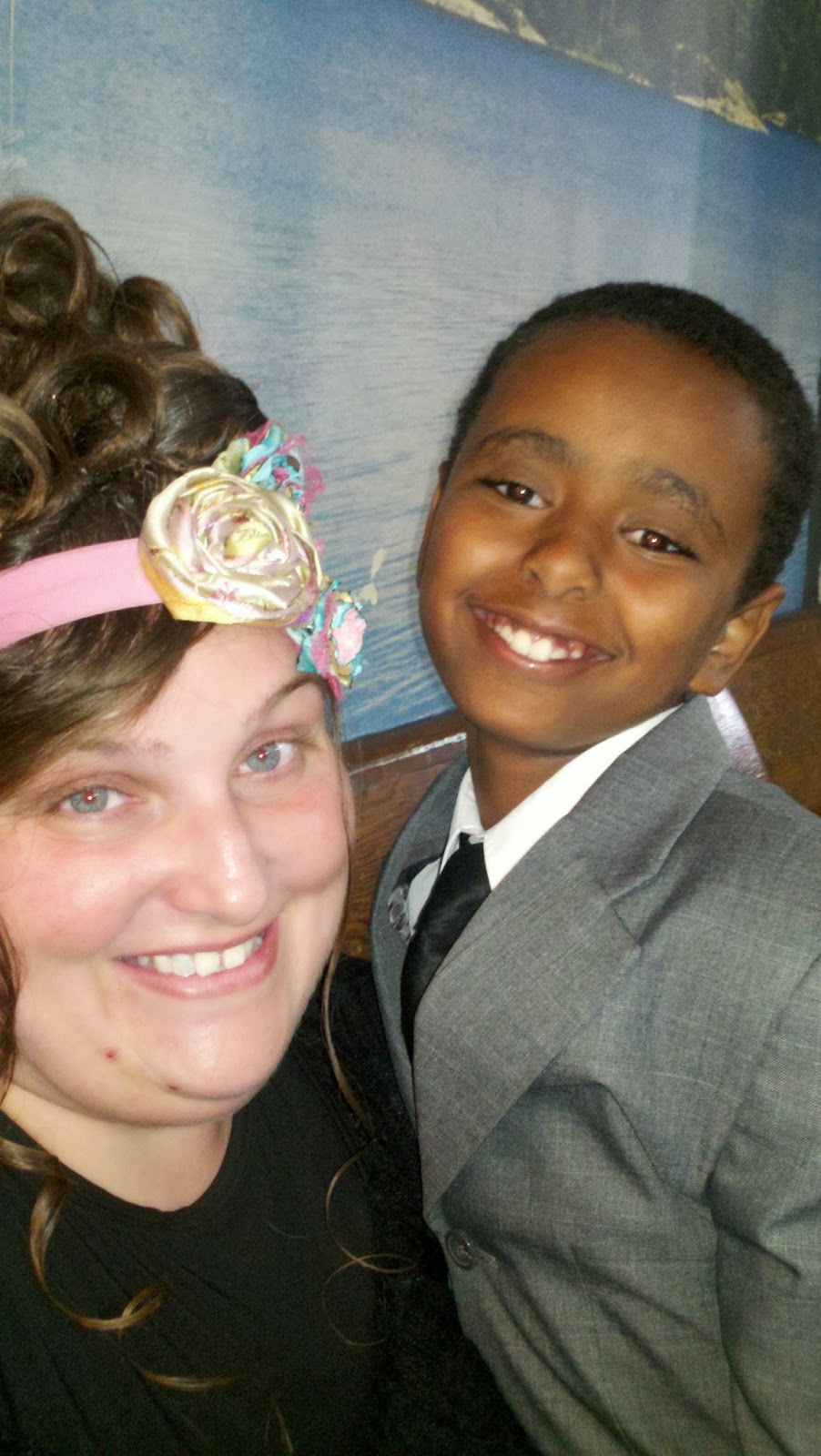 Annnnnd look at how CHOCOLATEY he is getting!!! I loooooove it!!! The way I see it, THE MORE CHOCOLATE THE BETTER!!! I don't think I've EVERRR had TO MUCH CHOCOLATE!!!
.
Annnnnnnnnnnd here is me an Chocolate Grandma!!! See I told you all she LOVED ME!!! We're pretty much BESTIES NOW!!! 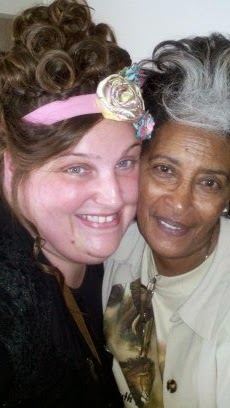 On the way back Hanna took me for ONE LAST TIME AT PEETS!!! 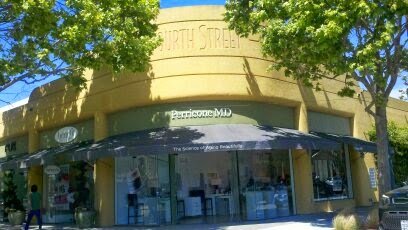 Then when we got back to the house, Hanna took a nap...I've learned NOT to mess with Hanna and her naps!!! SHE NEEDS THEM!!!! Then Sis. Kifle fed us leftover spaghetti (OF course we needed TWO LUNCHES! LOL) from after the graduation..STILL SOOOOOOOOOO YUMMMMY!!! And of course Ethiopian Ice Tea!!!
.
Btw: Did I ever tell you guys that I messed Stultz up on the whole Ethiopian ice tea thing...yeah sooooo you know how you left me the spices and tea when you were out here Hanna??? Well I made some and was sooooooooo proud of it...I told Stultz that he HAD TO TRY IT!!! He did and like practically CHOKED!!! AHAHAHAHA!!! Then he was trying to ACT like he liked it, I was like, Puleeeeeze, REALLY ITS FINE!!! You don't have to like it!!! He's like, its just STRONG!!!  I was like, NO REALLY, its GOOD!! Don't judge Ethiopian tea off of mine, YOU GOTTA HAVE SIS, KIFLE'S!!!! LOL (I think I need ANOTHER lesson!!!;)
.
Sooooo I was getting my stuff ready and all packed and meanwhile Hanna is jus snoozing away! Then I remembered that one of the days I had CASUALLY mentioned to Coco if he would teach me to drive stick! And he said that one of the days he would teach me! So its me, Seyon, Mesgana and Coco hanging out, well Hanna too, buuuut she was SLEEPING...LOL... annnnnd I'm like, LETS see if HE WILL ACTUALLY DO IT!!!
.
I'm thinking in my mind, MOST LIKELY, he will have an EXCUSE to NOT TEACH ME!!! So i'm like, Hey, you never did teach me stick! He was like, Oh yeah, lets DO IT!!! I was like, SHOCKED!!! Really??? I can't believe it!!! that's what I call, BRAVERY!!! He's like, YES! Buuuut first I'm going to make you guys my famous chocolate milkshakes!!!
.
So its while Coco is making the milkshakes that Hanna decides to wake up! She comes fumbling off the couch into the kitchen, still half asleep, like Hey whats going on? we have to get Mary to the airport! Coco's like, well FIRST I'm making these milkshakes, AND THEN I'm going to give Mary her first lesson on driving stick! Now SHE'S WIDE AWAKE!!! Hanna's like, WHAAAAAAAAAT??? Buuuut we have to go to the airport! Cocos like, yeah, you guys will make it, we're JUST going around the block ONCE!!! AHAHAHAHAHA!!!!
.
So the milkshakes were made, annnnnd UMMMMMM they were VERY GOOD, buuuuuuuut Coco, I feel like its neccasary to give some CONSTRUCTIVE CRITICISM...You said they were CHOCOLATE milkshakes, annnnnnnnnnnd unless your OBAMA, those were NOT VERY CHOCOLATEY to ME!!! MORE CHOCOLATE PLEASE!!! I'm jus SAYIN!!! :))))
.
Okaaaaaaaaaaaaay NOW here we are, in Coco's car, THE ROSE, me getting my FIRST driving lesson, driving stick!!! This is THE ONLY picture of proof we have...Seyon took it while her and Hanna sat in the back seat laughing hysterically and SCREAMING the whole time!!! I wish we had gotten picture of those two in the back freaking out, buuuuut since I was driving and Coco was a little preoccupied it didn't happen!!! LOLOL!!! I'm not to sure WHY we didn't take Mesgana with us, I'm thinking they were looking out for the safely of there little brother or something...HAHA...Aw we shoulda taken him!!! 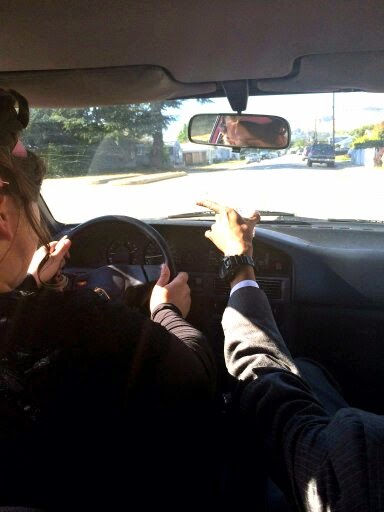 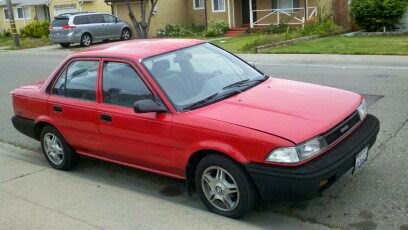 Then me and Hanna and Seyon went off to THE AIRPORT!!! The girls both agreed that surprisingly I had done very well!!! Thank you Seyon and Hanna!!! Then Hanna started making cracks about, ENJOY this nice breeze your feeling because you'll soon be back in ARIZONA!!! I was like, oh WOW!!! I'm like OH YEAH, weeeeeeellll I GUESS I"LL JUST HAVE TO JUMP IN MY POOL WHEN I GET BACK!!! sooo BOOYAH!!! 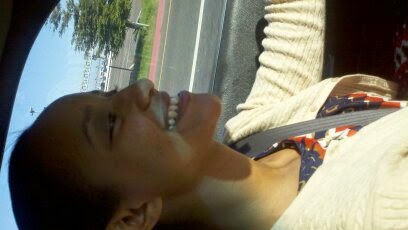 Then on the flight back home I thought about how AWESOME of a trip this had been annnnnd I honestly didn't think it could possibly get ANY BETTER!!! Buuuuuuut it DID!!! Because when we landed in Sky Harbor Airport, a text message immediately came into my phone and it said, SEYON JUST GOT THE HOLY GHOST!!!!
She got it in the NIGHT SERVICE!!!
I MISSED IT!!!
buuuuut I KNEW she was gonna GET IT!!!
Thank you Jesus!!! THANK YOU JESUS!!!
Annnnd that was the end to my unforgettable trip to Hanna's graduation!!!
Who's ready to make SOME MORE MEMORIES at WCC???
Woooooooooooooooohooooooooooooooooooooooooo!!!!
♥Mary Frances :)
p.S Here are links to the WHOLE trip
Day 1
Day 2 (Part 1)
Day 2 (Part 2)
Day 3
and this post is DAY FOUR!!! LOL
Posted by Mary Frances at 12:00:00 AM